The Red Monastery, located north of the White Monastery, was one of the three monastic communities in Shenoute’s late ancient monastic federation. Founded in the fourth century by a monk named Pshoi, it was originally a loosely knit group of hermits but later came under the koinobitic rule established by Shenoute’s predecessor Pcol and upheld by Shenoute himself. The Church at the Red Monastery was built in the early sixth century and features the most extensive and impressive program of wall paintings found in Egypt today.

Established in 2002, the Red Monastery Project has had as its primary focus the conservation and study of the wall paintings and architectural elements of the Red Monastery Church. The project has been carried out under the direction of Elizabeth S. Bolman of Temple University in collaboration with the Supreme Council of Antiquities and the Coptic Orthodox Church. It has been administered by the Egyptian Antiquities Project and the Egyptian Antiquities Conservation Project of the American Research Center in Egypt, with funding provided by the United States Agency for International Development. 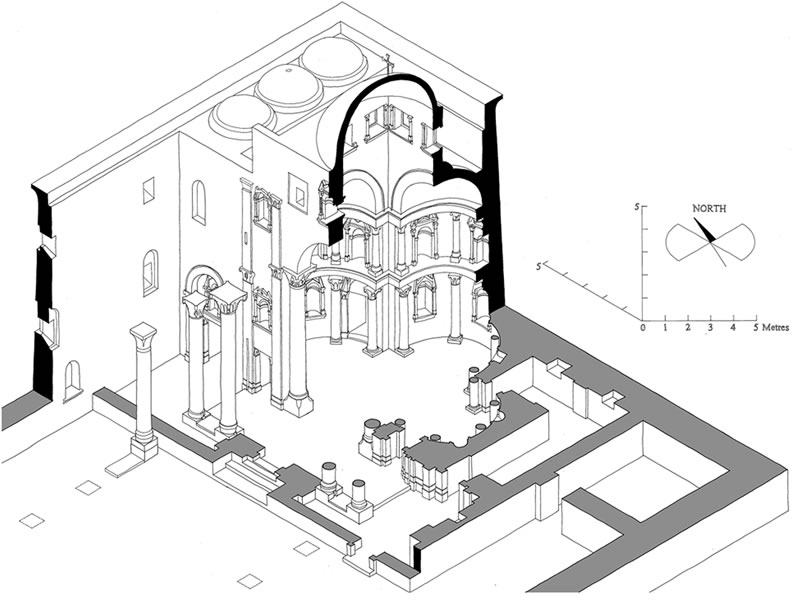 The church of the Red Monastery (Dayr Anba Bishay) dates to about 500-525 A.D. In form it is a basilica with a long nave, terminating in an elaborate trilobed sanctuary. The church is one of the best preserved examples of this type of religious architecture, which is known in Egypt and elsewhere in the Byzantine empire. Each of the three half circles that form the trefoil sanctuary consists of two ornamented tiers topped by a semidome. This intricate array of niches and columns comprises the most complete ensemble of architectural sculpture in any church in Egypt. Originally, the church probably had a pitched wooden roof. Today, the sanctuary is covered with a modern dome, and the nave is open to the sky. The building still functions as a church, in a living Coptic Monastery.

The dramatic late Roman architecture of the sanctuary interior is embellished with architectural sculpture and painting. Almost every interior surface is covered with paint, most of which dates between about the sixth and eighth centuries. Depictions of Christ, the Virgin Mary, apostles, evangelists, prophets and angels create a complex series of messages about salvation. The addition of monastic saints connects the paintings to the setting of the monastery. The numerous and brightly colored designs on the architectural sculpture are the best surviving example of what were Classical and Egyptian traditions that continued into Late Antiquity. In this later period, beauty was expressed through varieties of pattern and color, exemplified here by numerous vibrant motifs and figural subjects.

Before the beginning of the conservation project, the paintings in the sanctuary were almost completely obscured by centuries of soot and darkened varnish. The conservation team painstakingly consolidated, cleaned, and conserved the paintings, revealing their original magnificence.