The Scholarship of Natacha Rambova

The following text is a summary of C. Manassa and T. Dobbin-Bennett, “The Natacha Rambova Archive, Yale University”1

In 1946, Rambova received a grant from the Bollingen Foundation, revived in 1945 by Paul and Mary Conover Mellon.2 Rambova had met Mary Mellon through Maud Oakes in the early 1940s, and Mary Mellon’s dedication to the Bollingen Series would have a substantial impact on Rambova’s research as well as on the field of Egyptology as a whole. During her first Bollingen fellowship, Rambova’s research goal was to study comparative religion and symbolism through the decoration of small scarab seals. While Rambova believed that her research in Egypt would lead to a reclamation of the Atlantean origins of ancient knowledge and symbolism (which she ultimately believed found its way to both the Old and New World3), her cooperation with Alexandre Piankoff, a Russian Egyptologist who specialized in Egyptian religion4 focused her energies on the recording of ancient Egyptian monuments. 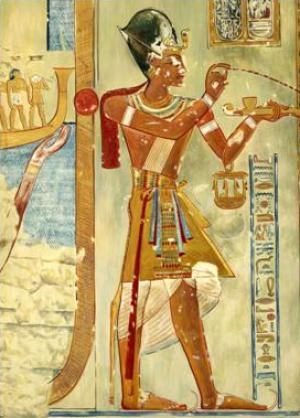 By 1949, the Bollingen Foundation had awarded Rambova a large grant for a two-year project, directed by Piankoff.5 This collaboration led to the publication of several important Egyptian monuments within the Bollingen Series Egyptian Religious Texts and Representations, published initially by Pantheon Books of New York (volumes 1 through 4) and then by Princeton University Press (volumes 5 and 6). Rambova edited the first three volumes of the series Egyptian Religious Texts and Representations: The Tomb of Ramses VI (1954), The Shrines of Tut-ankh-amon (1955), and Mythological Papyri (1957), all authored by Piankoff, and Rambova contributed an important albeit until now little utilized essay entitled “The Symbolism of the Papyri” to Mythological Papyri.6 The photographic records of the monuments and papyri within these volumes remain virtually unparalleled in their quality, and each endures as a standard reference work in the field of Egyptian religion.

Although Mary Mellon died before the publication of the Egyptian Religious Texts and Representations series, her energies made these remarkable volumes possible, and Egyptologists should be reminded of how much the six volumes fulfill Mary Mellon’s stated intention for the Bollingen Series — “making known to the English-speaking public those books of both past & present which will help it understand that the human soul or consciousness is not circumscribed; that it may be found in many unexpected places — and that through admitting the manifold aspects the One may be found which lies in Man himself.”7 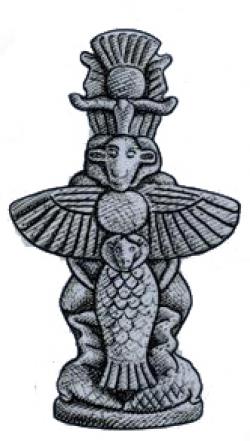 Over the course of almost twenty years, up until her death, Rambova compiled together a diverse collection of prints, drawings, photos, and research notes that now comprise the Natacha Rambova Archive, at Yale University. Religious symbolism provides a unifying theme for this widely diverse assortment of images, and the archive is meticulously filed and referenced, often sub-divided into themes or categories. Each file can stand alone as a discrete thematic unit; as a result, Rambova duplicated and filed individually a number of images under their constituent themes, resulting in the inclusion of over four thousand hand-drawn details from larger tableaux.

Images from the tomb of Ramesses VI form a large sub-corpus of her archive — surely the savants of Napoleon’s expedition, who called the tomb that of la métempsycose would understand8 — and the archive also contains the original photographic prints of the plates of the Bollingen Series volume The Tomb of Ramses VI, including the original photograph, subsequent watercolor (the work of the artist Mai-Mai Sze9), and final camera-ready print of the frontispiece for the volume. The archive also includes a few unpublished notations from the tomb of Ramesses VI, including indications of color schemes on the black-and-white line drawings of the scenes.

The collection contains Rambova’s original drafts and the final manuscript version of her work on The Cosmic Circuit, Religious Origins of the Zodiac, and the manuscript The Mystery Pattern in Ancient Symbolism, A Philosophic Interpretation. These two unpublished works are the summation of Natacha Rambova’s personal research on religious symbolism, and while the foundation of the works is Egyptian religion, her comparative discussions encompass regions as diverse as Asia Minor, Mesopotamia, Iran, and India. The manuscript The Cosmic Circuit is divided into five sections: Cosmology, Creation of the Universe, Symbols of the Cosmic-Circuit: Body-Parts, Animal Symbols of the Twelve Months, and Religious Calendars; the folders containing notes and images for each of these sections of The Cosmic Circuit, such as the zodiacal signs, make up a large portion of the archive. Rambova divided her work The Mystery Pattern in Ancient Symbolism, a Philosophic Interpretation into three parts: 1) Number: Symbols of Structure in the Cosmos and Man, 2) Animal and Body-Parts: Religious Origins of Zodiacal Symbols, and 3) The Astronomical Pattern in Greek and Mesopotamian Hero Myths and Egyptian Mystery Texts, A Comparative Analysis. In the introduction to The Mystery Pattern, Rambova summarizes the “language of the ancient Mysteries” as “silence rather than words, and symbols where speculative thought sought expression and communication.” Although her intentional omission of the contributions of Egyptian religious texts was as problematic at the time of her writing The Mystery Pattern as it is today, Rambova’s comments about the inextricability of text and image in compositions such as the Underworld Books remain valid. 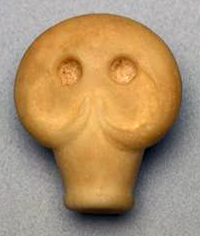 Both of her unpublished manuscripts show that Rambova combined a sharp intellect with boundless interests, and if published prior to her death, her wide-ranging presentation of symbolism might have fostered a deeper dialogue between Egyptology and Jungian analysis of archetypes.10 The fruitfulness of Rambova’s avenue of research is demonstrated by the recent publication of The Book of Symbols, Reflections on Archetypal Images, authored by members of the Archive for Research in Archetypal Symbolism, an organization that can be traced back to Olga Froebe Kapteyn and the Eranos lectures that began in the 1930s.11 While the past sixty years of scholarship has rendered Rambova’s analysis of Egyptian calendars obsolete, the spirit of her approach, particularly its emphasis on Jungian archetypes, lives on through the works of scholars such as Theodor Abt and Erik Hornung.12

Rambova also amassed a collection of ancient objects, photographs and descriptions of which remain within the archive. She began donating her collection of Egyptian antiquities to the Utah Museum of Fine Arts in 1952, and she willed a large collection of Nepali and Lamaistic art to the Philadelphia Museum of Art. A Predynastic bull’s head amulet, which belonged to Natacha Rambova, is now part of the Yale University Art Gallery collection (YAG 2007.207.2).