The two-day international and interdisciplinary conference in September, 2016, on Ritual landscape and performance brings together scholars from within Yale, the US and Canada, as well as Europe and Egypt to discuss the topic in different ancient and modern cultures.

The first day is dedicated to the field of Egyptology and Coptic Studies, and will comprise of talks on the ritual landscape throughout the different time periods of the ancient Egyptian culture as well as the aspect of performance. Scholars will discuss the topic with regard to ancient and modern Mesopotamia, the ancient Near East, Meso-America, and ancient China on the second day. A presentation on digital archaeology and its resources for the reconstruction of ancient landscapes will complement the conference. The conference will take place from September 23–24, 2016 at Yale University, Hall of Graduate Studies, Room 211, 320 York Street, New Haven CT, 06511 USA.

The event is free and open to the public.

Please RSVP christina.geisen@yale.edu if you plan to attend the conference, 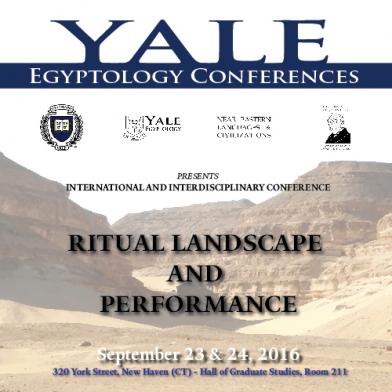 The following speakers have confirmed their participation

We acknowledge the generous support of

The Yale Initiative for the Study of Antiquity & the Premodern World

The K.W. & E.K. Rosenthal Memorial Lectures in Ancient and Near Eastern Civilizations