Shenoute and the History of the Monastic Federation

Shenoute was the first outstanding writer of the Egyptian language in its Coptic form, and his literary importance was never equaled; he is thought to have lived a very long life, from 348 to 465 CE. The ancient monastery of Shenoute is one of the most important historical sites, both for scholars and for the Coptic Orthodox Church. It was founded around the year 350 by Pgol, who was then succeeded by Ebonh. Its third leader was the great saint Shenoute, who led the monastic federation from 385 to 465 CE. Shenoute’s name is now attached to this site. A spiritual biography of the saint survives in the Bohairic dialect of Coptic. Attributed to his successor Besa, the Coptic text and its expansive Arabic translation actually both took shape over centuries in the context of liturgical practice.

Shenoute assumed the leadership of his monastic federation around 385 CE. As a monastic leader, he was a strict reformer of monastic moral life, an energetic administrator, a fiery preacher, and a self-styled spiritual guide. There is evidence that he accompanied Coptic Pope Cyril I to the First Council of Ephesus in 431 CE. He expended resources to support the poor and used the monastery to shelter refugees in time of crisis. He engaged in polemics against Christian heretics. He was an enemy of traditional Egyptian religious practice in the region of Sohag and Akhmim—attacking it in both word and deed. In Shenoute’s day, some of the ancient temples had fallen into disuse and/or had begun to be dismantled, and their architectural elements were reused in other buildings. Some of the material used to build the great church of Shenoute’s monastery was taken from other temple sites (from nearby Atripe as well as from the more-distant Abydos); this is the reason why some of the blocks built into the church are inscribed with non-Christian religious scenes or hieroglyphic texts. 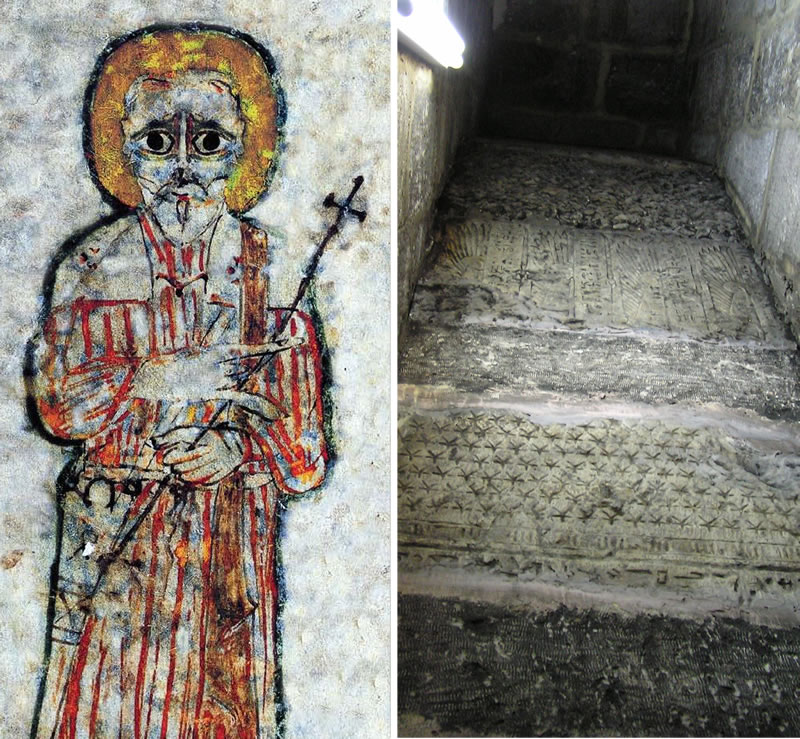 Figure 1 (left). Image of St. Shenoute adapted from a Paris Manuscript. Figure 2 (right). Reused Pharaonic blocks in the western staircase of the Church.

The writings of Shenoute constitute the largest extant literary corpus by a single author in the Coptic language. Organized in two collections, the Canons and the Discourses, they are the subject of a major editorial project led by Prof. Stephen Emmel (University of Münster; editor-in-chief). This project was initially founded at Yale in the year 2000, and the inaugural meeting of the international team of editors was facilitated by Prof. Bentley Layton and hosted by the Yale Beinecke Rare Book and Manuscript Library. Subsequent editorial meetings at Yale have been sponsored by the Beinecke, the William K. and Marilyn M. Simpson Endowment for Egyptology, and the National Endowment for the Humanities.

Shenoute’s monastery was a koinobion​, one organized around a life lived in common. In ancient times, a koinobitic (or coenobitic) monastery was a highly structured community of monks who worked together, ate together, and prayed together. The monastery provided spiritual direction, written rules and policies, and an elaborate chain of command. It was economically self-sufficient. The White Monastery was one of the very earliest koinobitic monasteries.

Shenoute was the leader of a federation consisting of three monastic communities: two monasteries for men and one monastery for women. With only a few exceptions, the male and female monastics had no contact with one another; the White and Red Monasteries housed only men. Each of the three communities was headed by an abbot or abbotess, who received orders from Shenoute. Each community operated more or less independently. Each contained a number of dormitory buildings called “houses”; each house had a head of house, who provided both administrative and spiritual guidance to the monastics living there. The houses contained “cells” (rooms) where the monastics lived and slept, an assembly room for weaving and prayer, and workshops. Besides the houses, other important buildings in each congregation were: a dining hall, a kitchen, an infirmary, an infirmary kitchen, a bakery, a central storage building, the church, a library and scriptorium, a gate house, workshops, and a laundry. Outside the walls were fields, vegetable gardens, palm groves, and fruit orchards, with their farm animals, equipment, and irrigation record.

The monastic population of each congregation contained a wide range of people: not only mature adults but also young children, adolescents, the simple, and the elderly. Special arrangements were made to care for each group according to their abilities and needs. The routine life of monastics was carefully regulated by rules, policies, and regimens—including how they walked, talked, dressed, ate, prayed, and what they were to think about. Their ascetic style of life was very disciplined. Monastics had to follow a daily schedule, which was signaled by the striking of wooden bells or gongs:

In between these events, they either worked and prayed alone in their cells or performed tasks assigned to them by their head of house. The monastics in each congregation shared a communal meal at midday, which was supposed to consist of bread and a strictly vegetarian diet with no milk products, fish, or wine. At night, they ate a simple meal alone in their room. Special fast days were observed on Wednesday and Friday. The Eucharistic liturgy was celebrated twice a week, on Saturday evening and on Sunday morning early. Sick monastics received expert medical care from male or female monastic physicians. Professional nursing care was provided in the infirmary, and richer food could be medically prescribed for the sick. Visitors to the monastery were housed and fed in a special place near the main gate.

The federation was nearly self-sufficient, like a large farm estate. Because they produced a surplus, the monastics were able to buy or barter for materials and services that the federation could not itself produce. Surplus products of the two men’s monasteries were plait work (baskets, mats, rope), sacks, and books; the women’s monastery produced woven goods of wool and flax.

Life in the Modern White Monastery

The ancient monastery fell into disuse some time before 1441 CE. In the late twentieth century (1975 CE), Coptic Orthodox monks reoccupied the site. Two decades later, in 1997, under the leadership of His Holiness Pope Shenouda III, the Holy Synod of the Coptic Orthodox Church gave official recognition to a new, modern monastery on the ancient site, named “The Monastery of St. Shenoute” (Dayr Anbā Shinūdah). This is a modern successor to the ancient monastery of Shenoute. The modern monastic buildings are now mostly located at the western edge of the site, near the desert. Shenoute’s feast day falls on the 7th of the month Abīb in the Coptic calendar (July 1, Western calendar). Every year thousands of Coptic Christians comes to this site from the neighboring towns of Sohag and Akhmim (and from further afield) to celebrate the annual festival (mawlid) of St.Shenoute.

We are extremely grateful to the monks of the Monastery of St. Shenoute for their partnership in our work.

Grossmann, Peter, Darlene Brooks-Hedstrom, Mohammed Abdal-Rassul, and Elizabeth Bolman. “The Excavation in the Monastery of Apa Shenute (Dayr Anba Shinuda) at Suhag: With an Appendix on Documentary Photography at the Monasteries of Anba Shinuda and Anba Bishoi, Suhag.” Dumbarton Oaks Papers 58 (2004), pp. 371–99.

Layton, Bentley. “Rules, Patterns, and the Exercise of Power in Shenoute’s Monastery: The Problem of World Replacement and Identity Maintenance.” Journal of Early Christian Studies 15 (2007), pp. 45–73.