The Roman Period temple of Nadura sits atop a promontory in north-central Kharga Oasis, its lofty position affording clear views of Hibis, Bagawat, and the desert roads leading to the Nile Valley (Figure 1).1 On a clear day, one can see the Abu Sighawal and Refuf passes to the north, Gebel Ghennima to the east, the Bulaq pass to the south, and the entire town of Kharga (ancient Hibis) to the west.

The natural vantage point of the site probably explains its modern name (< Arabic: naẓāra, “place of viewing”),2 and its location was clearly of strategic importance.3 However, neither the temple nor the surrounding settlement has ever been the object of archaeological study, and only brief excerpts of the extensive hieroglyphic inscriptions have been published.4 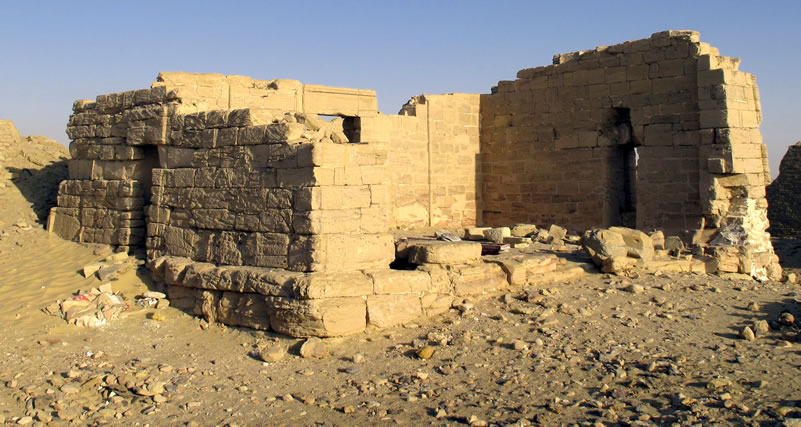 The most important task for understanding the local theology and cultic function of Nadura is to record and translate all carved reliefs and hieroglyphic texts dating to the reigns of Hadrian and Antoninus Pius (117–161 CE).5 Unfortunately, the inscriptions are badly damaged from wind erosion (Figure 2), and the considerable number of lacunae continues to increase as more blocks disappear from the site (Figure 3).6 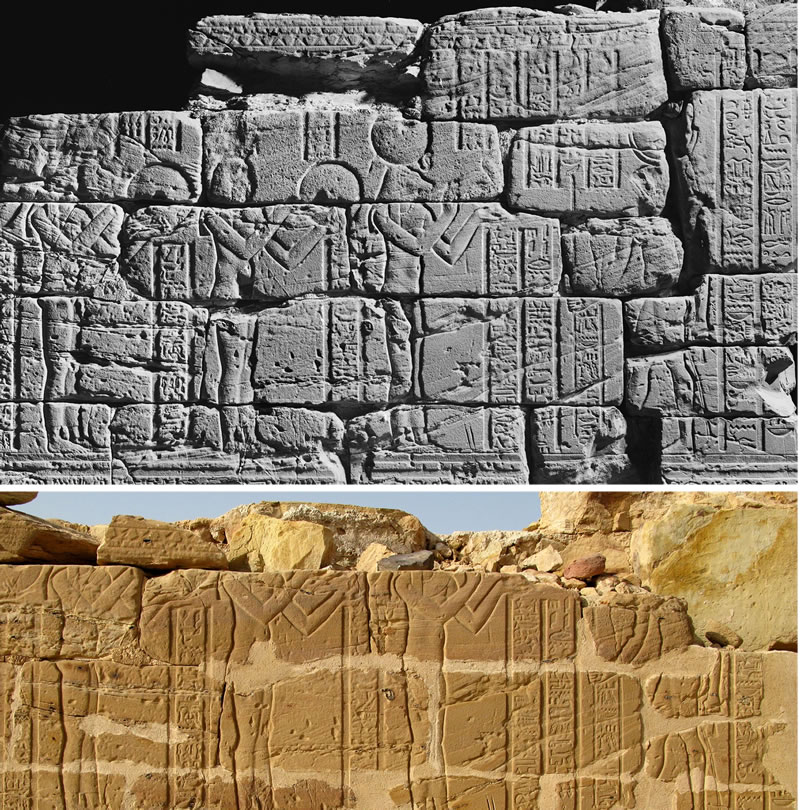 In 2009, the Yale Nadura Temple Project began the complete epigraphic documentation of the reliefs and inscriptions, alongside the architectural and archaeological survey of the entire site. Despite the abysmal state of preservation of some of the hieroglyphs, a facsimile copy is preferable to typeset or autographed hieroglyphs, since only a true epigraphic edition allows other scholars to propose meaningful restorations or alternate readings.7 The documentation project has benefited enormously from archival photographs taken by Jean-François Gout in 1976 at the behest of Serge Sauneron, currently housed in the collection of the IFAO in Cairo.8 Fortunately, these earlier photographs recorded significant portions of texts and reliefs which have since vanished.

Given the fragmentary condition of the temple inscriptions, the careful epigraphic survey is still in progress. Nonetheless, initial copies of the hieroglyphic texts and reliefs allow for an important preliminary observation: identifying the primary divinity of Nadura temple. 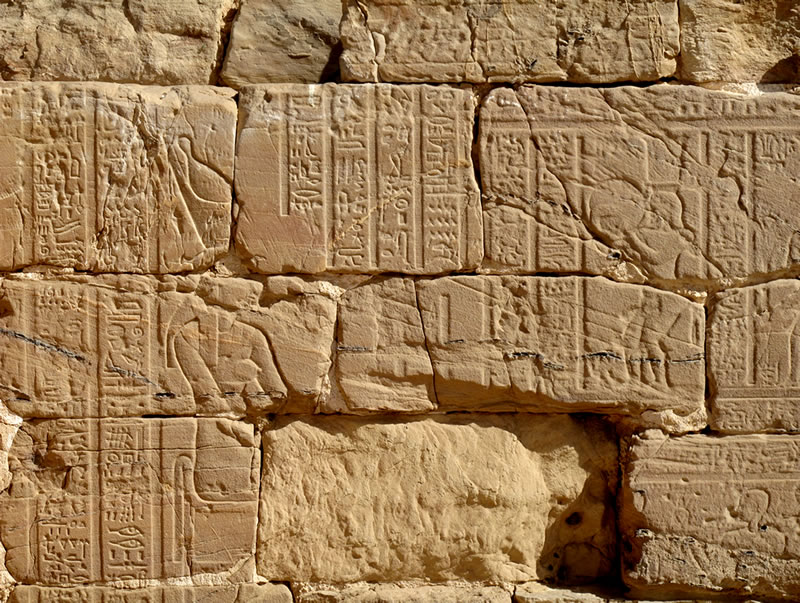 Lacking textual evidence, scholars have attributed the temple to different deities. Serge Sauneron suggested the temple belonged to the goddess Mut,9 since she features prominently in one well-preserved scene on the north wall (Figure 4).10 Three Bes-gods play various instruments, Ihy-children shake sistra, and a god wearing the hemhem-crown (almost certainly Thoth)11 raises his arms in adoration, while a goddess and the king agitate even more sistra. As some have already noted,12 this scene is a perfect illustration of the Myth of the Wandering Goddess, where Thoth and the king (wearing the crown of Onuris-Shu) literally entice Mut back from the Western Desert while a musical ensemble pacifies her impending rage. Other scholars have assumed the temple was dedicated to Amun of Hibis, just like Hibis and Qasr el-Zayyan,13 while Dieter Kurth suggested the temple could have belonged to both Amun and Mut.14

While Amun and Mut naturally feature in certain offering scenes, several details indicate that Chonsu presided at Nadura.15 Clear evidence comes from the fecundity figures on the north and south walls, since they bring offerings specifically to Chonsu (Figure 5).16 In both places Chonsu has a falcon head and a lunar disk, and on the north wall he bears the explicit label: “Chonsu Lord of Hibis” (

). Furthermore, a frieze text on the north wall and two bandeau inscriptions on the north and south walls address the primary divinity in the second person masculine singular. 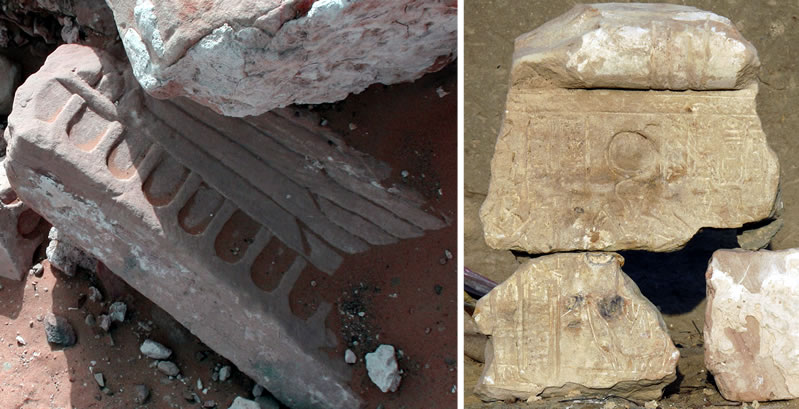 Chonsu actually predominates in the decorative program of Nadura, appearing in the majority of offering scenes on the west wall of the forecourt, while reliefs involving other divinities (Mut, Min, Re-Harakhty) primarily occur on the north and south walls. Furthermore, Chonsu appears twice standing in front of Amun, a unique position of honor he does not occupy elsewhere, not even in the temple of Chonsu at Karnak.

In the 2009 season, the Yale Nadura Temple project began clearance of the mostly razed sanctuary, of which only minor architectural traces were visible prior to excavation.17 While removing the windblown sand, we uncovered a number of inscribed blocks belonging to the sanctuary itself. In addition to common architectural elements — ceiling slabs with star decoration, carved kheker-frieze, and cavetto cornice with a winged sundisk (Figure 6) — there were also several fragments from the portal jambs and lintel, carved in a very similar style to the portal of the forecourt and apparently dating likewise to the reign of Hadrian. One scene depicts the king presenting jugs of milk to Chonsu the Child and Mut (Figure 7). In this relief, Chonsu sits on a lotus and holds his finger to his mouth, a pose that is surprisingly rare for Chonsu.18 Only the right half of the lintel, Amun and Mut feature on the outermost scene (Figure 8), while Chonsu and Mut appear in the central panel, just as on the door of the forecourt. This layout once again underlines the primacy of Chonsu at this temple, particularly within the naos. 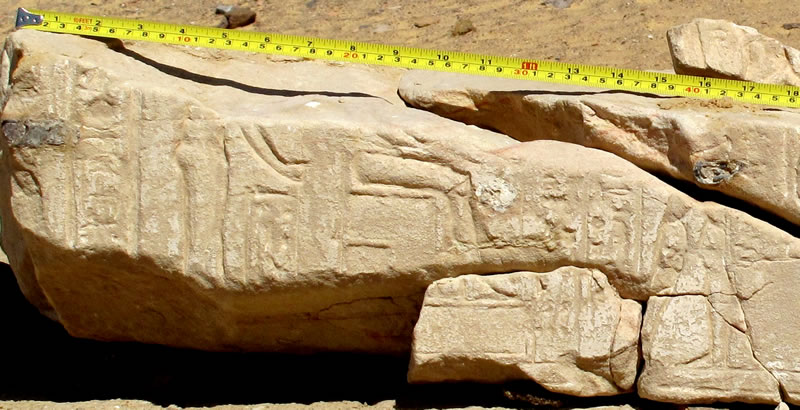 The textual and iconographic evidence overwhelmingly indicates that Chonsu was the primary divinity at Nadura. The hilltop location of this temple suggests a conscious mythological interpretation of the landscape, since Chonsu of Thebes was traditionally associated with a primeval mound and his temple was even named Bnn.t.19 More importantly, the elevated position permits unobstructed viewing of the lunar phases, whereas priests of Chonsu in Karnak were required to make such observations from the temple roof.20 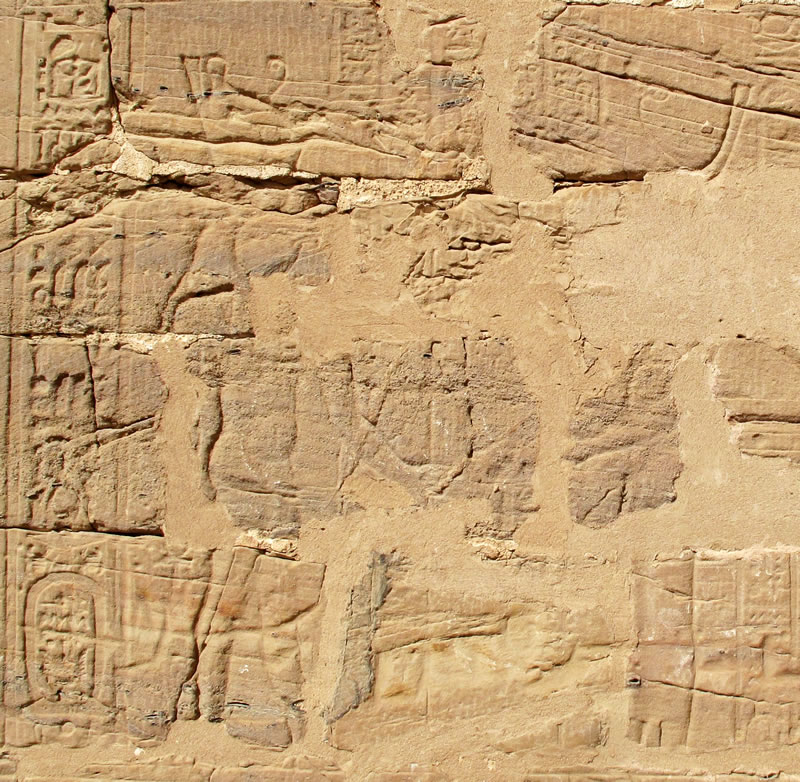 At present, the precise nature of the Chonsu temple remains unclear. The presence of dancing Bes-figures and tambourine-playing goddesses could be indicative of a mammisi. In addition, two remarkable reliefs from the west wall portray Chonsu receiving the royal inheritance. On the south side, Chonsu (spelled:

) appears as a child wearing the double crown and a cape, receiving years from Nekhbet and wine from the king. The corresponding scene to thenorth features an equally remarkable image of Chonsu as a falcon-headed child (!) who accepts an object from Wadjet (possibly the mks-inheritance document) and offerings from the king (Figure 9). Both representations are atypical for Chonsu the Child,21 but they recall similar coronation scenes from the mammisi of Edfu.22

Nonetheless, tambourines are not exclusive to Mammisis, and musicians feature in many other festival contexts, including rooftop processions at the New Year,23 ceremonies for the Wandering Goddess,24 and ritual destruction of enemies.25 Furthermore, unpublished Ptolemaic blocks uncovered at Hibis Temple feature decoration indicative of Mammisis, including hippopotamus-goddesses and multiple reliefs of Mut and Chonsu the Child.26 In Thebes, Chonsu had at least two distinct cult centers: the large temple in Karnak dedicated to Chonsu in Thebes Neferhotep, and a smaller mammisi for Chonsu the Child within the Mut Precinct.27 It is possible that Nadura was the main temple of Chonsu in Kharga Oasis, although he might have also had a separate Mammisi closer to Hibis.

External references to Nadura are lacking at present, although Chonsu appears frequently in the decoration program of nearby temples (Hibis, Ghueita, Qasr el-Zayyan, Dush, and Deir el-Haggar). In his classic study on the Egyptian Oases, Guy Wagner noted that theophoric names formed with Chonsu or Herakles (the standard interpretatio Graeca of the Egyptian deity)28 are extremely popular in documents from Hibis and Bagawat.29 In particular, the name Πετεχῶν occurs much more frequently in Kharga Oasis than in Dakhla,30 reflecting the considerable importance of Chonsu near Nadura. Future seasons of the Yale Nadura Temple Project will undoubtedly shed more light on the local cult of Chonsu and his connection to other Oasis temples.