Within a broad concession bounded essentially by the Girga Road to the north and the region of Aniba to the south, the Theban Desert Road Survey (TDRS) and Yale Toshka Desert Survey (YTDS) explore the caravan routes of the Western Desert, principally those connecting the Thebaïd with Kharga Oasis, the small oases of the Nubian Western Desert, and points beyond.

The sites within the concessions of the TDRS and YTDS range from remote prehistory through the early modern period. Many of the sites reveal evidence of important interactions between Nilotic and Saharan groups during the formative phases of the Egyptian Predynastic Period (e.g. Wadi el-Hôl, Rayayna, Nuq’ Menih, Kurkur Oasis). Other sites preserve important information regarding the use of the desert routes during the Protodynastic and Pharaonic Periods, particularly during periods of political and military turmoil in the Nile Valley (e.g. Gebel Tjauti, Wadi el-Hôl). 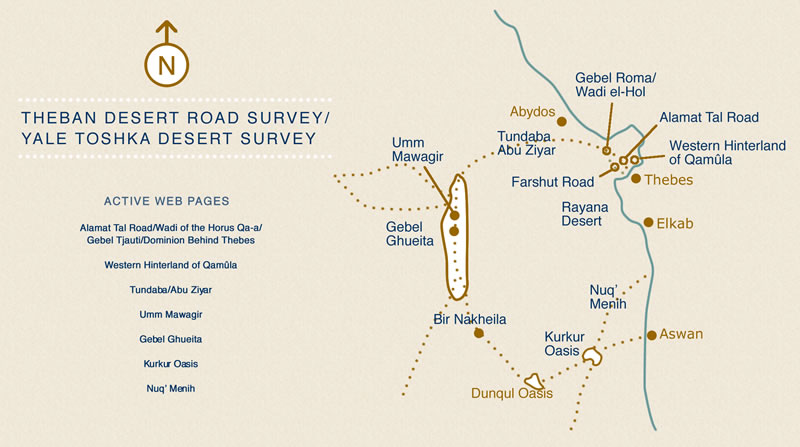 Ceramic material, often in astonishing abundance (e.g. the caravansaries of Gebel Qarn el-Gir, the Wadi el-Hôl, and Gebel Roma’), occurs alongside considerable epigraphic material, primarily in the form of rock inscriptions (e.g. Gebel Tjauti, Wadi el-Hôl, Dominion Behind Thebes, Rayayna, Bir Nakheila). The remains along the route connecting Thebes with Kharga Oasis (Gebel Antef, Gebel Roma, Wadi el-Hôl, Gebel Qarn el-Gir, Abu Ziyar, Tundaba, etc.) in particular allow for an often complex reconstruction of the Nilotic administration’s approach to the oases, and of the economic interactions of the Nile Valley and Kharga Oasis, particularly from the time of the early Middle Kingdom. Within the oasis of Kharga, the TDRS has investigated important desert passes, sites of predynastic and pharaonic activity associated with the routes of the Western Desert, and has already uncovered evidence of four millennia of activity at the site of Gebel Ghueita, overlooking routes through and connected with the Bulaq Pass. 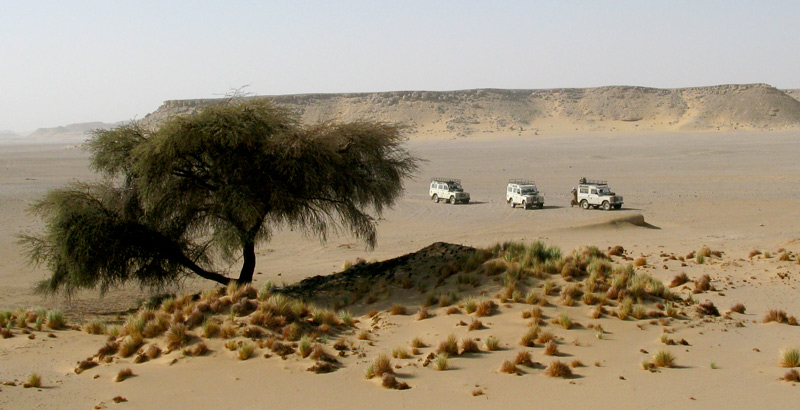 Brief History of the Expeditions

According to Major Ralph Bagnold, erstwhile desert explorer and founder of the Long Range Desert Group, exploring the desert hinterland of the Nile Valley meant that “it was within one’s power at any time to step right off the map.” (Libyan Sands: Travel in a Dead World [London, 1935], p. 137). Although the desert is now to a great extent mapped, and well imaged through remote sensing, one may yet walk off the archaeological map with relative ease. In many ways the work of the TDRS began with such a walk in 1991, and the subsequent growth of the project was to a great extent due to the persistence of Deborah Darnell. Limited in time and funding during the initial seven field seasons, the TDRS began greatly to increase in scope when the expedition acquired the aegis and support of Yale University in 1998. At the same time, responding to a request for assistance from the Supreme Council for Antiquities and a former director of the American Research Center in Egypt, we expanded the extent of our activities with the YTDS, a logical extension of our study of the desert roads of the southern Thebaid.