Although the main northern routes of the Theban Western Desert preserve ample evidence of early contacts between the Nile and Kharga Oasis, an officially sponsored push to develop the route and the oasis first occurred during the early Middle Kingdom.

This corresponds to the rise of Thebes to a prominence the city achieved in no small degree — if not primarily — due to its strategic location as a hub of routes through the Western and Eastern Deserts. The shortest route between Thebes and Kharga incorporates the shortest route between the Nile Valley and Kharga — the Girga Road — and remained in use for a considerable period of time. 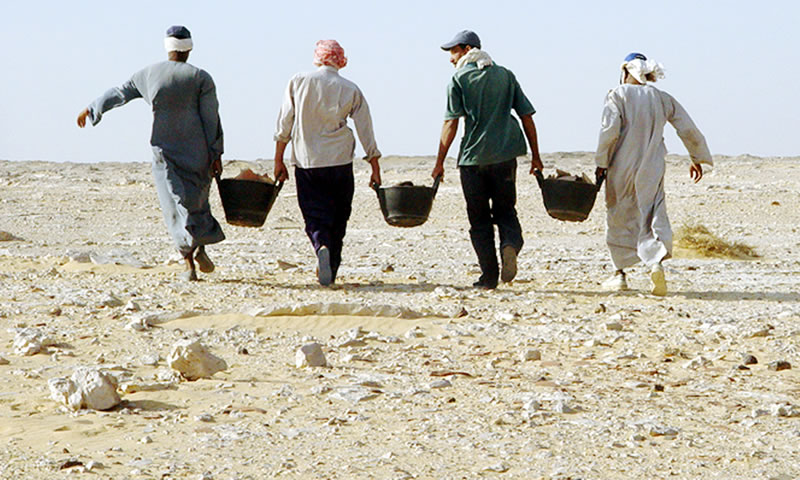 Old Kingdom campsites atop the high plateau, most along the main “Girga Road” between the oasis and the Tundaba outpost, reveal the inevitable use of Kharga as a stopping and watering point for travelers between the Upper Egyptian Nile and Dakhla. Nevertheless, the Old Kingdom presence at Dakhla appears to have had more the character of an outpost in foreign territory. The early Middle Kingdom already intended to change that situation, and to bring the oases more fully into the Egyptian world, and perhaps more importantly intended to make of their inhabitants good, tax-paying Egyptians. Textual evidence supports a change in political and economic status of the oases at the beginning of the Middle Kingdom. Archaeological and epigraphic evidence from the Girga Road, particularly from the site of Abu Ziyar, reveal that the integration of the southern oases into the Theban economy coincided with an official sponsorship of traffic on the route, and the establishment of outposts both on the high plateau and in Kharga Oasis as well. The official presence on the road is no longer in evidence by the Thirteenth Dynasty, but by that time an apparently self-sufficient outpost functioned at Gebel Ghueita.

By the time of the late Second Intermediate Period, Theban efforts at controlling the main route linking the Thebaid with the Western Desert led to the establishment of an outpost at the mid-point of the route between the region of Girga and the northeastern wells of Kharga Oasis. The outpost — Tundaba — is distinguished by a remarkable example of pharaonic hydraulic engineering, a deep cistern dug atop the high plateau. By the Ramesside Period that outpost as well appears to have become somewhat unimportant, although traffic on the Girga Road continued and even increased through the Graeco-Roman Period.