The cistern is a remarkable feature, and the amount of labor that went into its construction indicates that the pharaonic presence at Tundaba was neither modest nor ephemeral. Most likely the cistern at Tundaba provided a collection point and holding tank of sorts for the run-off of rainwater entering into the Tundaba depression from numerous surrounding wadis (Figure 1).2 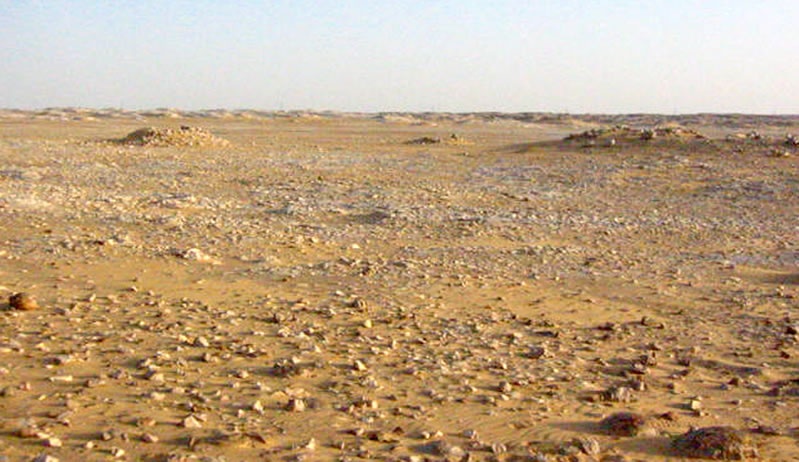 The mouth of the cistern is excavated into hard playa mud. Beneath this “fossil” alluvium the shaft proper begins, and passes first through a layer of loose limestone concretions cemented in the ancient alluvium, thereafter entering a layer of solid Eocene limestone. The lower shaft, after passing through several alternating layers of stone and earth, descends through marl deposits and ends in limestone. The Tundaba cistern is at one of the two points of deepest playa deposition at Tundaba, at the base of a low limestone hill. By excavating at the base of the hill and entering one of the deepest points in the depression the Egyptian hydraulic engineers may also have been searching for a fault fissure in the limestone, a conduit for subterranean waters of the sort with which they were undoubtedly familiar from sites such as Dunqul and Bir Nakheila. The north-south flattening and east-west elongation of the bottom of the shaft, and several small borings there, suggest the search for such a fissure. 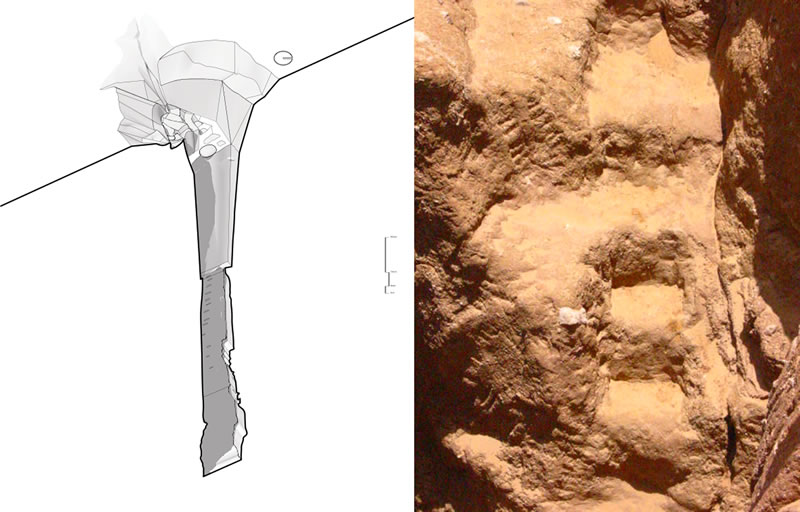 The cistern possesses an overall bipartite construction (Figure 2).3 The roughly circular upper portion — approximately 7 meters in diameter and 4.5 meters in depth — is cut into the playa alluvium, with platforms to the north, a ramp and a small set of stairs to the east, and a longer, spiral staircase descending the south and west walls (Figure 3). The closest parallels to the multiple stairs, albeit not so complex as the Tundaba structure, are a number of ancient Egyptian libation basins, models of larger hydraulic installations.4

The second portion of the cistern is a shaft descending in four major divisions — 1) a square excavation, approximately 1.5 meters to each side, descending 8.5 meters below the spiral staircase to an “L”-shaped stone mastaba at approximately 13 meters below the surface; 2) a continuation of the shaft, offset to the west, more irregular than the upper shaft, descending 6.2 meters below the stone mastaba to an earthen shelf on the north side (Figure 4); 3) an irregular excavation extending down an additional 4 meters; and 4) the final portion of the shaft, slightly shifted to the west, narrower to the south and north sides, ending with a stone bench on the west side. The final depth of the cistern is 28 meters and 35 centimeters. In the sides of the shaft are footholds, some in the form of slots cut into the sides of the shafts, others protruding, flat-topped knobs of stone (Figure 5), and some combinations of the two. Rope marks on the upper sides of the excavation suggest that the footholds were used while climbing up ropes extending down the sides of the cistern.

The cistern at Tundaba finds its closest parallels in a single large well and several smaller “household wells” at the city of Amarna.5 The large Amarna well reveals the same bipartite structure as that of the Tundaba cistern — an upper spiral stair leading to a lower shaft.6 On a grander scale, the grand puit at Deir el-Medina also shares similarities with the Tundaba cistern.7 The essentially square shaft of the Tundaba cistern, with the slight shift in orientation, the footholds, and the irregular bench at the probably unfinished bottom, is remarkably similar to the tomb shaft 41 in the “Vallée du Puits” of Western Thebes.8

The excavation of two narrow trenches through the ring of ancient radîm surrounding the cistern has revealed the somewhat surprising history of the construction of the final version of the cistern (Figure 6). The designers of the cistern appear to have leveled the area of the top of the excavation. Although the original surface sloped slightly up toward the north, a small posthole in the surface (2) beneath the north edge of the radîm was of the same depth as the surface near the mouth of the cistern. The hole is apparently the remnant of what may once have been a series of such holes, placed so as to allow for the leveling of the surface.9

Unexpectedly, sand was the first and most abundant material deposited in the radîm, during the excavation of the cistern (3). Atop this thick layer of sand the original diggers of the shaft deposited layers of playa earth, limestone rocks and chips, more earth and limestone, and marl (5-8). The great quantity of sand in the lowest part of the radîm indicates that the ancient well engineers first cleared some preexisting, sand filled depression of no mean size. They then enlarged the depression, cutting into the ancient playa earth, apparently while creating the spiral stairs. The limestone deposited within the radîm, ranging from large boulders to small chips (7), is consistent with the cutting of the shaft proper, beneath the stairway; the marl, relatively meager in quantity, is evidence of the lowest level of the final excavation of the shaft (6).

A number of pharaonic sherds lay atop the original radîm (8), and others were imbedded within the surface of the rim of the cistern. The sherds atop the radîm were of late Second Intermediate Period to early Eighteenth Dynasty in date. In all cases, sherds imbedded in the water-deposited surface beneath the radîm correspond in type and date to pottery atop the ;radîm. No post-Eighteenth Dynasty pottery appeared below the hard-packed sand representing the initial filling of the cistern, suggesting abandonment of the cistern by the Ramesside Period. Two sherds of pharaonic date were also found at the very bottom of the cistern. Altogether this ceramic evidence indicates a Second Intermediate Period to early New Kingdom date for the final form of the cistern, agreeing with the material we have recovered from the associated dry stone structures at Tundaba.

Some Middle Kingdom pottery near the radîm rim may relate to an earlier cistern at the site, perhaps — like Abu Ziyar — part of the Middle Kingdom supply system on the road; the existence of an earlier, albeit smaller and shallower, cistern at the site is the best explanation for the large amount of sand in the radîm rim. An enlargement of the cistern at the end of the Seventeenth Dynasty would be a very early example of nascent New Kingdom interest in developing water sources for desert activities, for which one may compare the activity of Sety I in the Wadi Mia, and that of Sety I and Ramesses II in the Wadi Alaqi;10 Merneptah also claims to have been energetic in reopening neglected wells, making them “function again for messengers.”11

At some point the cistern was no longer carefully maintained, and sand, periodically compacted by rain, began to fill the cistern itself, and the space within the radîm rim, protecting many of the pharaonic sherds lying atop the ancient radîm. Within the rain hardened sand filling the space within the radîm rim surrounding the top of the cistern we have recovered a number of sherds of Roman date, as well as a low wall of stones and oasis-fabric kegs, this latter providing evidence of a Roman Period investigation into the by then long abandoned pharaonic excavation.

The cistern required three seasons to clear and plan. Using the laboriously recorded plans and sections of the well made during the clearance, architect Jason Kim has produced three dimensional rotations of the Tundaba cistern. These reveal the interrelationships of the complex architectural elements of the cistern better than any series of static sections.

Animation 3 Rotation of Tundaba cistern with a descent into the shaft
Web-optimized .m4v file (1.9mb)