Two main pharaonic roads, the Alamat Tal (Wadi Alamat) Road and Farshût Road, cross the Qena Bend between ancient Thebes and the region of Hou, providing a desert “shortcut” to the often difficult waters of the Nile, and giving Thebes direct access to the shortest route to the southern oases — the Girga Road.

The Farshut Road, known by the time of the Twenty-First Dynasty as the “Road of Horses,”1 departs Thebes just north of the Valley of the Kings, crosses the high plateau between Gebel Antef (overlooking the Western Valley of the Kings) and Gebel Roma (above the Wadi el-Hol), and descends at the Wadi el-Hol before heading toward Gebel Qarn el-Gir. The Alamat Tal Road, discovered by the Theban Desert Road Survey in 1993, provides a more northerly route and travels through the low desert for over ten kilometers before ascending the high plateau at Gebel Tjauti. Both the Alamat Tal Road and the Farshût Road join at the Gebel Qarn el-Gir caravansary, whence lead routes to Hou, the region of Abydos, and the oases of the Western Desert. 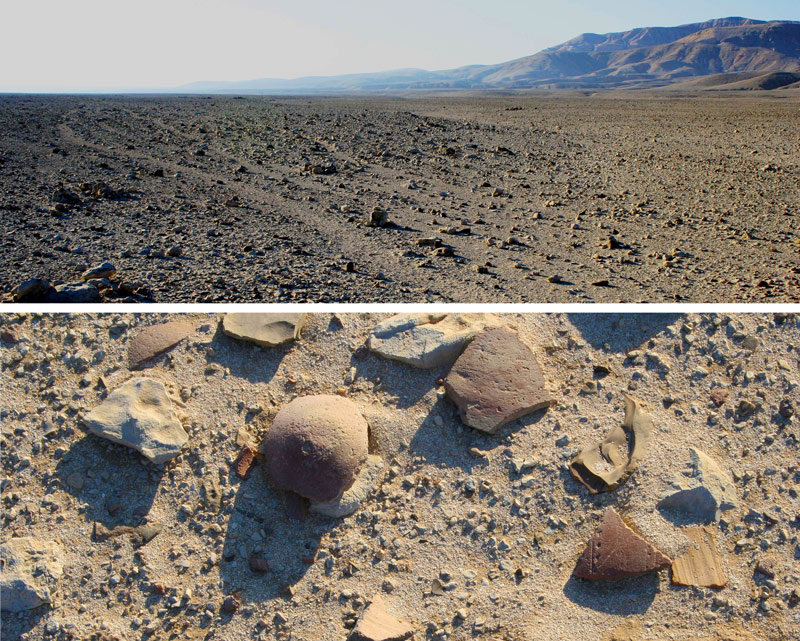 The tracks of the Alamat Tal Road, like those of the Farshût Road, appear as meandering grooves in the desert surface, an alternately wide and narrow swath of tracks literally carpeted with potsherds. The ceramic evidence indicates that the Alamat Tal Road was in heavy use from Predynastic times through the late New Kingdom, with reduced activity later, particularly by Coptic travelers.

Clusters of small dry stone tent bases (stones apparently laid as windbreaks around the bottoms of temporary structures) attest to Middle Kingdom patrols along the Alamat Tal Road, while during the Seventeenth Dynasty two mudbrick towers with dry-stone faced glacis guarded the Theban terminus of the route. The twin towers controlled access into the Theban nome, and protected a small cistern immediately below the towers. As the Alamat Tal tracks enter the middle desert and the large Wadi Imran, cairns and huts mark the road. After crossing the Wadi Imran, the route enters the high desert; at this point, to the north of the road, is the mouth of the Wadi of the Horus Qa-a oriented north-south, which contains at least nine major concentrations of rock art and inscriptions, Predynastic through Early Dynastic in date; one site preserves the serekh of Qa-a, last king of the First Dynasty, after whom we have named the wadi.

West of the mouth of the Wadi of the Horus Qa-a, the caravan tracks of the Alamat Tal Road pass an interesting feature of dry-stone walls, apparently of Predynastic date.2 These semi-circular walls are open to the prevailing north wind, making them unsuitable as campsites, but ideal for concealing either watchmen or hunters who wished to observe human or animal traffic traveling into the gebel and moving toward the north-west along the Alamat Tal Road. As the Alamat Tal Road continues in a northwesterly direction, a subsidiary route branches off, ultimately passing the large rock inscription site “Dominion Behind Thebes,” ascending the high plateau, and connecting with the Farshût Road before that track reaches Gebel Roma.

The main Alamat Tal Road ascends the high plateau at Gebel Tjauti, a major rock inscription site named after the Coptite nomarch Tjauti, whose road-building text is one of the major inscriptions at the site. At the base of Gebel Tjauti and below the track itself are large concentrations of ceramic remains that include sherds primarily of Predynastic through mid-New Kingdom date. On the gebel above Gebel Tjauti is another group of dry-stone huts, probably constructed during the Middle Kingdom, and an enormous cairn, over forty feet in diameter. The high plateau portion of the Alamat Tal Road is approximately six kilometers long and — like other portions of the tracks — is marked by small cairns and abundant pottery sherds. A short distance northwest of the Gebel Tjauti ascent, the tracks of the Darb Arqub el-Baghla, ascending the plateau west of Naqada and in use primarily during the Predynastic and Protodynastic Periods, join the Alamat Tal. After descending into the low desert, the Alamat Tal tracks lead towards Gebel Qarn el-Gir, a true ancient crossroads, where tracks from Hou, Abydos, and Kharga Oasis converge with the Farshût and Alamat Tal Roads from Thebes.