Yale’s archaeological work in Wadi al-Natrun involves the excavation and conservation of early Christian monastic remains in the desert west of the Nile Delta.

Since its inception in 2006, this work has been overseen by Prof. Stephen J. Davis as part of Yale Monastic Archaeology Project North. Darlene Brooks Hedstrom (2006-2010) and Gillian Pyke (2010-present) have served as archaeological directors. A primary focus of YMAP-North has been the Monastery of John the Little in Wādī al-Naṭrūn (ancient Scetis). Vast in extent (over seven square kilometers in area) and containing around eighty unexcavated architectural structures, the John the Little site is increasingly threatened by agricultural encroachment and human vandalism. The project is working with the Egyptian Supreme Council of Antiquities to document these valuable remains and to preserve them for future generations.

Multiple seasons of fieldwork at the Monastery of John the Little have been completed, made possible by grants from the Simpson Endowment for Egyptology at Yale University, with additional support from the National Geographic Society, Dumbarton Oaks (Harvard University), and Columbia University. In 2006, the YMAP team began with a series of geophysical and archaeological surveys at the monastic site of Pherme in the western Delta, before shifting its attention to the Monastery of John the Little. Beginning in 2007, the excavations at John the Little were expanded to include a large, well-preserved monastic residence, measuring approximately 25 x 25 meters. This structure features a distinctive mud-brick architecture, kitchen installations, and an oratory with an extensive program of figural wall paintings and numerous Coptic dipinti (painted wall inscriptions). Excavation of the residence was completed in 2012 and the team has subsequently been conducting study seasons for the analysis of finds. Multiple volumes documenting the architecture, art, pottery, inscriptions, small finds, organic materials are currently in preparation for the Yale Egyptological Publications series. 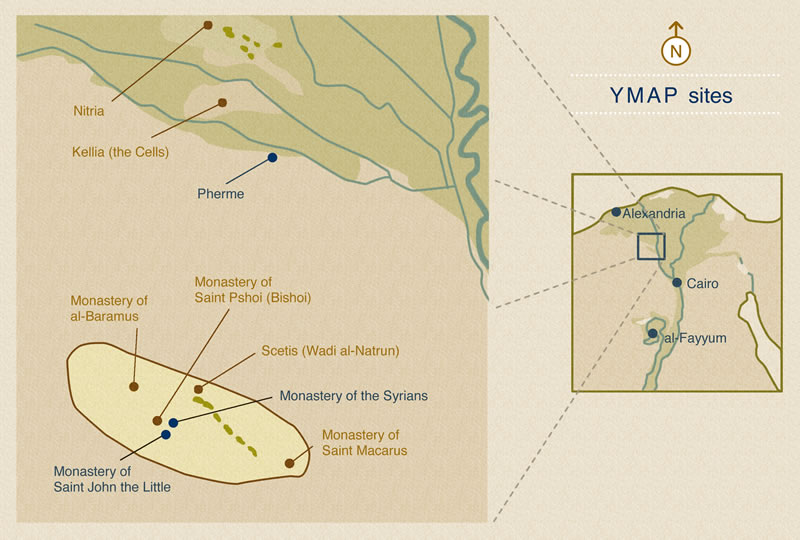