The Necropolis of Mo‘alla: Archaeological Remains

In addition to the well-known and prominent hill that contains the tombs of Ankhtyfy and Sobekhotep (designated Area A),1 the Mo‘alla Survey Project has identified twelve additional concentrations of tombs. From Area A proceeding northwards, distinct topographical areas containing groups of tombs shafts — typically different sides of the gebel — were given the designations B through L (Figure 1), and Area L appears to represent the northernmost limit of the necropolis.

The long east-west facing slope of Area H was divided into three smaller units: the eastern portion (Area H1; Figure 2), the western portion (Area H2), and the small spur with Pan Grave tombs (Area H3; for more on the Pan Grave cemetery, click here). We also surveyed one area of tombs south of Area A, located along the arm of the gebel south of the small village Naga el-Abu Said, which we designated Area P. Using a Topcon GPT 3100W Total Station, we established a basic map of the entire area, which delineates each concentration of tombs and its main topographical features. In future seasons we plan to refine this archaeological map further and begin categorizing the wide variety of tomb types within the Mo‘alla necropolis, which include large shaft tombs, multi-chambered rock-cut tombs, and a large number of small single-chambered tombs cut into layers of shale.2 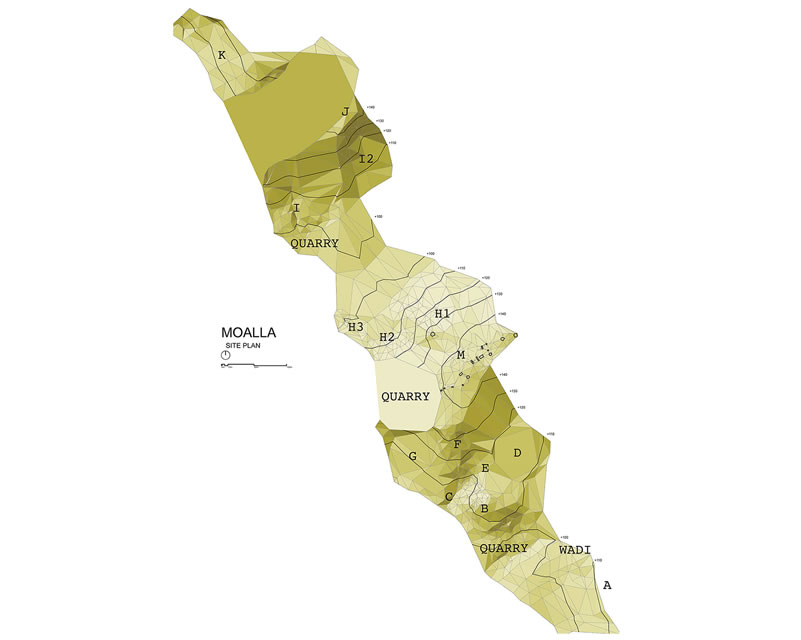 At each concentration of tombs, we collected diagnostic ceramic remains, including a large array of complete and reconstructable vessels. Initial ceramic analysis reveals that the tombs in the Mo‘alla necropolis range in date from the Old Kingdom through the early New Kingdom, with the Eleventh, Twelfth, and Eighteenth Dynasties particularly well represented. Our survey of the Mo‘alla necropolis has also discovered the first evidence for Predynastic and Early Dynastic activity in the area. Diagnostic sherds included the rim to neck of a jar in Marl A13 (Figure 3a), a small round vessel in Nile B1 with exterior red polish and two knobs/handles at the maximum width imitating stone vessels4 (Figure 3b), and a black-topped vessel (probably a tall beaker) with direct rim. Due to the small size of the corpus of Pre- and Early Dynastic pottery, it remains uncertain whether this material belonged to a small habitation site or early tombs in the area.

Diagnostic Old Kingdom pottery includes small and large “Meidum” bowls, whose profiles suggest a Fourth/Fifth Dynasty date (Figure 3c and 3d, both in Nile A1).5 Like the tombs of Ankhtyfy and Sobekhotep, several concentrations of tombs in the Mo‘alla necropolis are First Intermediate Period in date (for two decorated First Intermediate Period tombs, click here). Diagnostic forms from the Ninth through Eleventh Dynasties include footed bowls with red polish and distinct carination (Figure 3e is Nile B1; Figure 3f is Nile B2); examples with incised wavy-lines also collected throughout the Mo‘alla necropolis are paralleled in Eleventh Dynasty and early Twelfth Dynasty contexts.6 ;A short-necked jar (Figure 4a; Nile B2/C) is typical of First Intermediate Period to early Middle Kingdom ceramics.7 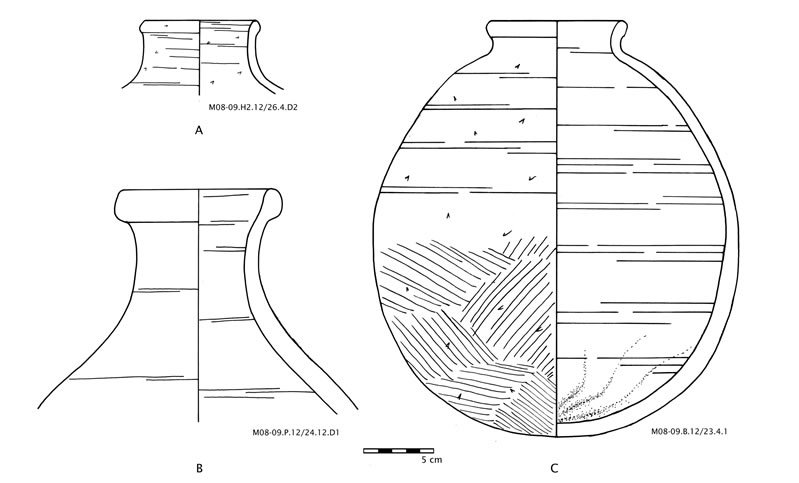 Middle Kingdom tombs are spread throughout the Mo‘alla necropolis, including the cemetery on the gebel south of Naga el-Abu Said (Area P). From that latter area is a kettle-mouth storage jar (Figure 4b; Nile C), with parallels from the late Twelfth through early Thirteenth Dynasties.8 Other Middle Kingdom forms include ovoid storage jars (Figure 4c; highly fired Nile B2), bowls with outflaring rims (Figure 5a: M 08-09.G.12/24.4.D5, Nile B2),9 and large thick-walled bowls with direct rims and rope marks (Figure 5c;, Nile C).10 Nile B1 hemispherical cups are expectedly common in the necropolis (Figure 5b; vessel index: 181).

Some of the most common vessels throughout the entire Mo‘alla necropolis are small (ca. 10-15 cm high, 8-10 cm diameter) vessels with wheel-made rims and hand-finished bodies and bases, most of which are made from a coarse Nile C fabric. These ubiquitous objects appear in a wide variety of shapes: conical jars with wide mouths, slightly flaring rims, and bases ranging from round to pointed (Figure 6a); conical jars with flaring rims, pronounced shoulder, and pointed base (Figure 6b); conical jars with direct rims and pointed bases (Figure 6c); and “mug”-shaped vessels with flat bases and slightly flaring rims (Figure 6d). Other vessels have an asymmetrical profile, such as Figure 6e. A wide variety of small platters occur alongside these vessels. The small size, large quantity, and method of manufacture relate these vessels to similarly mass-produced “miniature vessels,”11 which also appear to have been produced specifically for funerary use.12 The closest parallels to the small vessels at Mo‘alla appear in First Intermediate Period cemeteries at Tarif and Qurneh.13 The archaizing tendencies of many Middle Kingdom funerary ceramic forms14 inhibits more precise dating of surface remains at Mo‘alla, particularly since no typology exists for most of these forms.15

In addition to ceramic vessels, surface remains around the tombs in Areas H1, H2, and P contained fragmentary ceramic objects that belong to a category of objects commonly known as “offering platters,” which later develop into the more architecturally complex “soul houses.”16 Upper Egyptian examples typically consist of a roughly oval or horseshoe-shaped base, surrounded by a low wall that can also enclose a small model structure. In the “courtyard” of examples both with and without structures are offerings — bread, vegetables, and oxen — as well as channels for libations that could be poured over the object. The fragmentary ceramic platters from Mo‘alla contain the typical range of offerings and water channels, but do not preserve any trace of structures, although they might have been present. The extant sections indicate that the Mo‘alla platters were oval or horseshoe shaped, and the corner of one fragment (Figure 7a) includes the end of the low wall surrounding the platter and one channel at a right angle to the front of the platter, all features of the horseshoe-shaped offering platters from numerous Upper Egyptian sites.17 The fragmentary platters from Mo‘alla include the standard repertoire of offerings, including a bull’s head, vegetables, and bread loafs (Figure 7b).

Seventeenth Dynasty material is concentrated in Area H3, which contains several Pan-Grave Nubian burials (click here for more information). Nearby, in Area H2, is at least one tomb of Eighteenth Dynasty date, and other New Kingdom tombs are certainly present in other areas of the Mo‘alla necropolis.18 Red and black-painted Marl A4 sherds from Area H2 (Figure 8) indicates activity in the mid-Eighteenth Dynasty (particularly the reigns of Thutmose III-Thutmose IV).19 Uninscribed ceramic funerary cones were also present on the surface of this area, which are probably contemporaneous with the nearby Eighteenth Dynasty burials, although a Middle Kingdom date is also possible.20