In the northernmost section of the Mo‘alla necropolis are two rock-cut tombs with traces of preserved painted decoration (M08-09/T1 and M08-09/T2). Except for the tombs of Ankhtyfy and Sobekhotep, these are the only known decorated tombs at the site and are thusfar unpublished.1

Although most of the painted plaster within the tombs is no longer extant, enough paint survives to reconstruct some of the scenes within the tombs and date the decoration to the First Intermediate Period, roughly contemporary with the tombs of Ankhtyfy and Sobekhotep.2 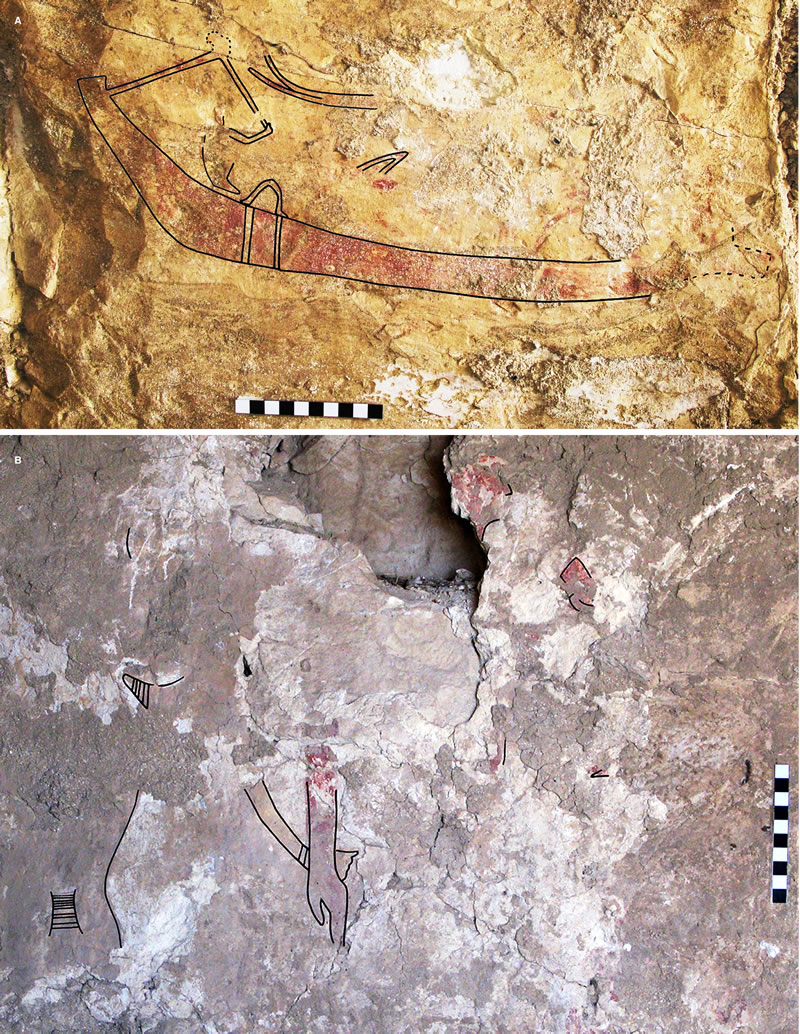 The north tomb, M08-09/T1, has fragmentary decoration remaining on the south and east walls of the tomb chapel. The south wall shows a boat — with the narrow hull, low profile, and raised stern of other First Intermediate period water craft3 sailing to the right; most of the figures or objects on board the ship are damaged, but traces of a man squatting at the steering oar are visible (Figure 1a).4 The south side of the east wall contains several registers of offering figures, including three men wearing short kilts, facing right, each presenting a different cut of meat;5 beneath the offering bearers the horns of a bull and the head of a human attendant, also facing right, are visible.6 On the north side of the east wall the tomb owner is depicted standing, while a female (probably his wife) stands behind him, grasping his left arm in her right hand; like the offering figures, the tomb owner and woman face to the right. In front of the tomb-owner is a smaller figure, facing left, who presents an offering (Figure 1b). Such “hovering” offering figures are a hallmark of First Intermediate Period art, and the preserved paint in M08-09/L.T1 suggests that the figure was presenting either a khepesh-leg or a jar held between his two hands.7 No texts are preserved, with the exception of a single hieroglyphic group:

; the diagonal slanting lines of the third-h are an unusual feature that finds parallels from the Sixth through Thirteenth dynasties.8 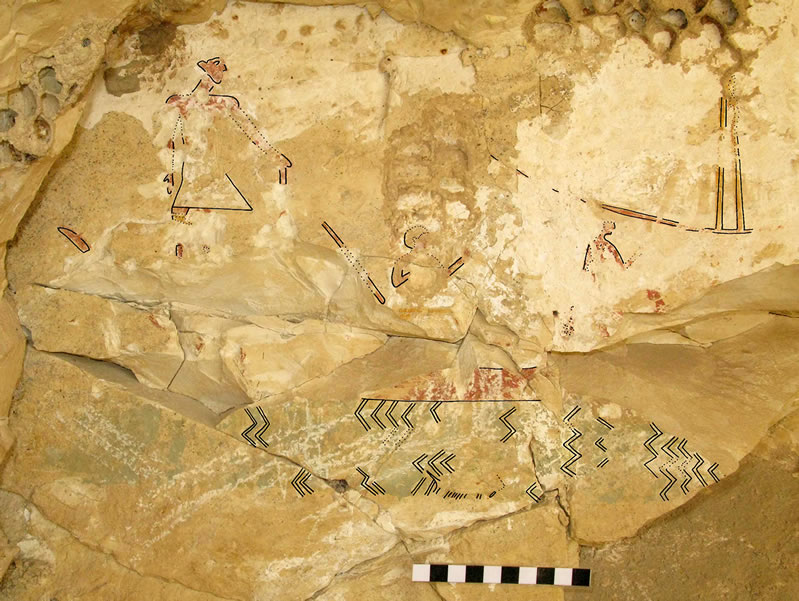 The decoration in M08-09/L.T2 has suffered even more severely than that of M08-09/L.T1 and only a single scene is still preserved. Within this scene two boats sail to the right over a waterway (Figure 2). Of the leftmost boat, part of the stern and a standing occupant — probably the tomb owner — are visible. The boat to the right is similarly fragmentary, but preserves traces of a bipartite mast and one curving yard-arm of the sail.9 A single red fish is preserved in the water, but no nets are visible.10