Some of the plastered walls at Atripe preserve traces of painted Coptic writings (dipinti) written by female monastics who recorded their names and details about their titles and positions, their concerns and activities, and their interpersonal relationships.

In Italian, the word dipinto (plural, dipinti) refers to a painted (as opposed to an engraved) inscription. The walls of the Refectory and Six-Pillared Hall feature a number of dipinti, which give invaluable information about the inhabitants of the late ancient monastery at Atripe. One dipinto in the Refectory (fig. 1), written by a female monastic named Antinoe, records a date equivalent to 594/595 CE. Ceramic evidence indicates that the wall writings from the Six-Pillared Hall would seem to date to the sixth to seventh centuries or earlier.[1] 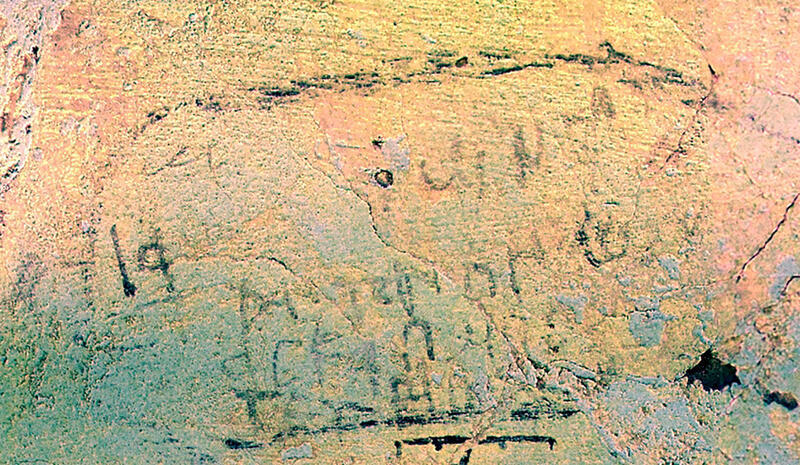 Figure 1.  Dipinto in the Refectory including a date (AM 311 = 594/595 CE) and reference to a female monastic named Antinoe who “sent out water from the table.” Color-manipulation by Alberto Urcia, using DStretch.

An epigraphic survey of the dipinti in the Six-Pillared Hall, Refectory, and Church was conducted by Stephen J. Davis. He worked closely with Alberto Urcia, who used digital techniques to enhance the texts, and liaised with Wendy Dolling, who excavated much of the Six-Pillared Hall, and Camille Angelo, who conducted archaeological recording in the Church.[2] The goal of the survey was to document, transcribe, and translate these texts, and through them investigate aspects of daily life in the monastic foundation as recorded by its members.

Three questions were of particularly keen interest.  Do the texts contain any evidence for dating? Can the archaeological identification of the adaptive reuse of the Repit temple precinct be confirmed as associated with a monastic foundation? If so, is it the women’s monastery belonging to the White Monastery Federation, as suggested by other written sources? The survey also considered the relationship between the content and placement of the texts, which might potentially provide insights into the use of monastic space.

To ensure that each dipinto was fully documented, to maintain consistency across the dataset, and to facilitate its analysis in comparison with other written materials and sites, Davis established a four-stage protocol for recording the epigraphic data. Each dipinto was first examined in situ (i.e. in its original place), measuring the height and width of the text and of the preserved plaster area, as well as its position on the wall and location within the room (fig. 2). These data allowed the consideration of the relationship between each dipinto and the architecture and physical space, as well as the relationship between dipinti within and across spaces. 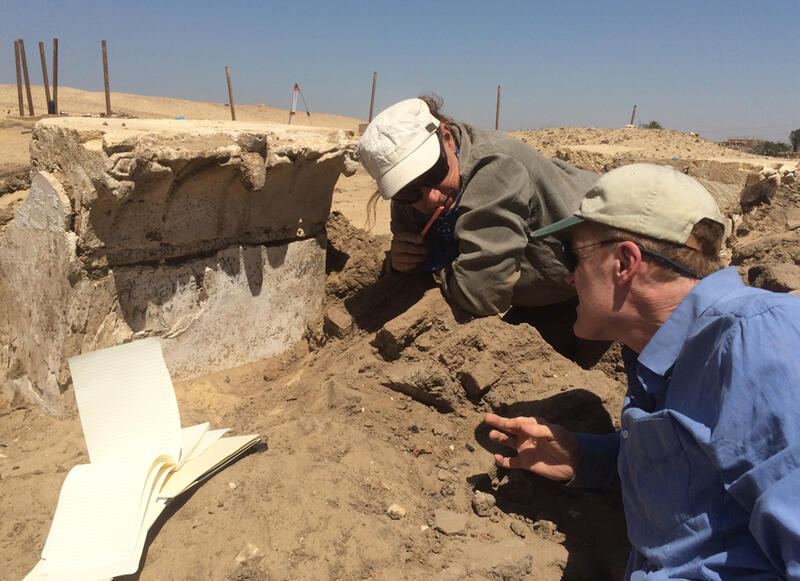 Figure 2. Stephen Davis and Wendy Dolling discuss a dipinto in the Six-Pillared Hall.

In the second stage, detailed images of each dipinto were studied and initial transcriptions were produced. This process was aided by photographic and photogrammetric methods developed in collaboration with digital archaeologist Alberto Urcia. Many of the dipinti were very poorly preserved and in some cases, almost invisible to the naked eye. Each potential dipinto was recorded in 3D using photogrammetry, and then exported as an ortho-rectified image. Each image was processed using DStretch, a plug-in that runs with a free image viewer software program (ImageJ).[3] Using this tool to manipulate the RGB (i.e. red, green, and blue) color values enhanced the visibility of text and other image elements (fig. 3).[4] 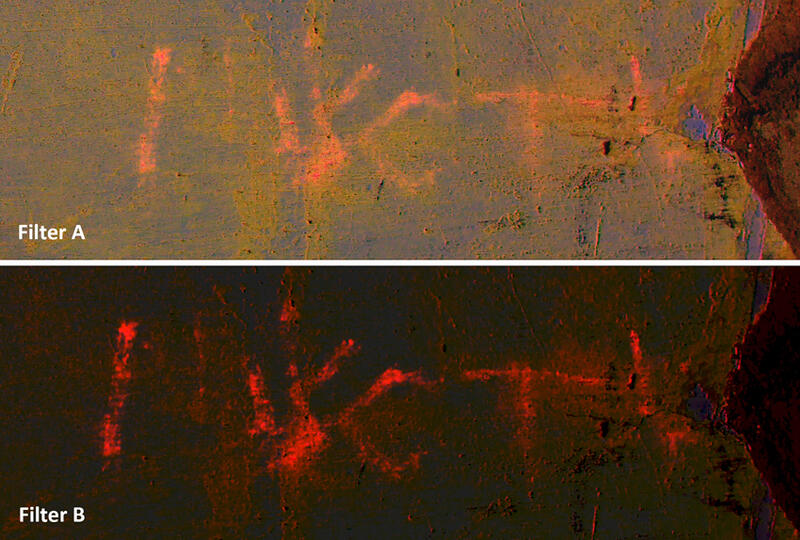 Figure 3.  Color-manipulated images of a red-painted dipinto with the name Iousta in the Refectory by Alberto Urcia, using different DStretch filters.

The third stage was one of checking and collation. The dipinti were re-examined in situ, and measurements and other details were reviewed in comparison with the photographic record. The fourth and final stage, conducted off-site, involved final emendations and corrections to the preliminary transcriptions, and contextual analysis of the dipinti on the basis of additional study and expert input from colleagues.

In analyzing the dipinti, Davis also examined technical aspects of the execution of the texts, such as handwriting, language, and content. In order to address specific questions relating to monastic identity of the community, particular attention was paid here to titles, names, places, and activities. The analysis also considered the relationship between the text and its physical setting, which in some cases shed light on the function of particular spaces.

The dipinti were applied to white-plastered surfaces. A variety of paint media, handwriting styles, and writing competencies were observed, pointing to multiple individuals engaged in the practice of writing. Most of the dipinti were painted in black pigment (see figs. 1 and 5–8), the preservation of which is very variable. Red paint was employed in a few cases (see fig. 3). There is also one surviving dipinto written in green pigment (fig. 4). The significance of this later color choice is not known. Although the green dipinto responded well to digital manipulation, it was too poorly preserved for a full reconstruction. Overall, the writing-styles range widely, from relatively unpracticed to more formal scribal hands. A couple of special cases also feature ornamented letter forms. 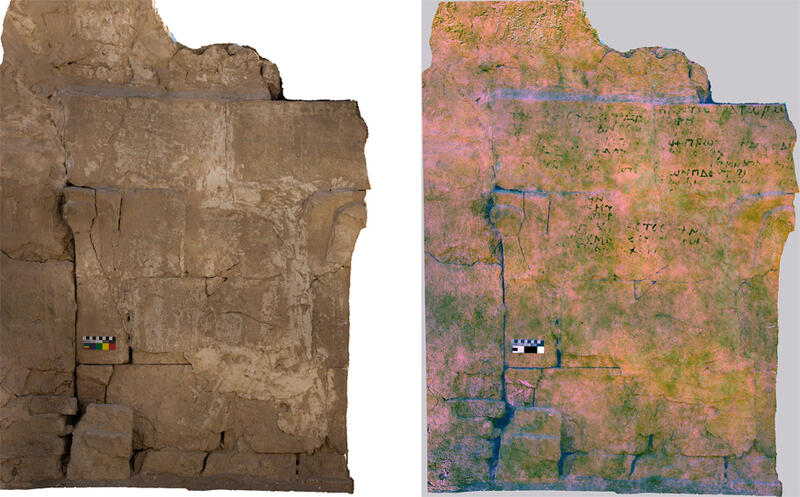 Figure 4.  Green-painted dipinto in the Refectory possibly naming St. Thecla. On the left, a photo before DStretch color manipulation. On the right, a photo after DStretch.

The Coptic script in evidence is in the Sahidic dialect, used in Upper Egypt before the spread and standardization of the northern Bohairic dialect in around the tenth century CE. One of the dipinti in the Refectory (fig. 1) records a date from the late sixth century (AM 311 = 594/595 CE). This corresponds well with the sixth to seventh century date range assigned to the pottery in the lowermost archaeological layer in the Refectory, and to that of the pottery and glass in the abandonment assemblage in the Six-Pillared Hall.

The content of the dipinti provides definitive proof that the site is identifiable with the women’s community belonging to Shenoute’s monastic federation. The evidence for a Christian identity includes the mention of divine names in prayers addressed to God, christological monograms (i.e. abbreviations of the name Jesus Christ), and the use of closing blessings like “Amen.” Furthermore, terms drawn from the Old Testament, such as the name “Zion” in the phrase “the Table of Zion” (referring to the Refectory), are also employed (fig. 5).[5] The clearest evidence that the monastic community was connected with the Shenoute’s federation is the recording, on one of the pilasters of the Six-Pillared Hall, of a prayer that invokes the saint by name (see fig. 8). 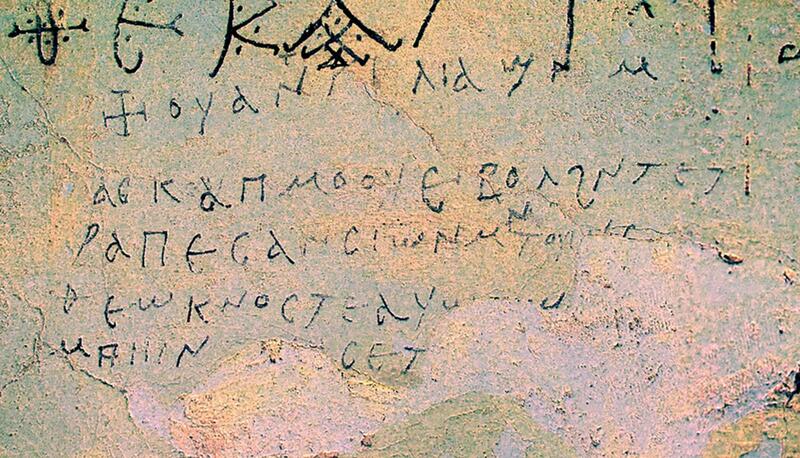 Figure 5.  Dipinto in the Refectory naming “Little Evangelia” and including a reference to the “Table of Zion.” Color-manipulation by Alberto Urcia, using DStretch.

Most of the dipinti were written by monastic women, who identify themselves by name, confirming the female-gendered identity of the Atripe monastic community. They included as many as three different monastic women named Thecla (fig. 6), along with others named Jelet, Mariam, Kyra, Tanasta, Mana, Apostolia, Taēse,  Iousta (fig. 3), Evangelia (figs. 5 and 6), and a certain Anastasia, who is given the title, “the Head of the Table” (fig. 7).[6] The diminutive Coptic designation shēm (“little”), which appears frequently, probably functioned as a technical term referring to the status of some of these women as novices, and perhaps as a form of address underscoring the communal value of humility (see figs. 5 and 6).[7] Finally, in the context of female monastic piety, one dipinto (fig. 4) also may make reference to Saint Thecla, after whom some of the monastic women were named. The practice of being named after holy figures was a common expression of devotion in the early Christian cult of the saints.[8]

Figure 7.  Two dipinti in the Six-Pillared Hall associated with Anastasia, who is identified as the “Head of the Table,” Color manipulation by Alberto Urcia, using DStretch.

The dipinti found in the Refectory and in the Six-Pillared Hall also contain language connected with the social function of these two rooms within the community and in particular their association with storage, administration, and distribution of food and drink. The action of sending or delivering water by female monastics is recorded in three separate dipintipreserved in the Refectory. In two of the three, the water is specifically sent out from the “Table” or the “Table of Zion” (see figs. 1 and 5).[9]

In the Six-Pillared Hall, the surviving dipinti are found within an architectural organization that includes ceramic storage installations possibly for food, suggesting that the building’s function was closely connected with that of the Refectory. A fragmentary dipinto may contain a record of “100 vessels”. Another one mentions “the stewards” who served Anastasia in her role as “the Head of the Table” (see fig. 7). Finally, the prayer associated with Shenoute’s name asks God to “guard” the entire congregation, a protection that implicitly extended to its goods and foodstuffs (fig. 8). It is possible that the Six-Pillared Hall had an administrative function, similar to that proposed by Louise Blanke for one of the buildings at the White Monastery—a facility often referred by the Greek term, diakonia.[10] 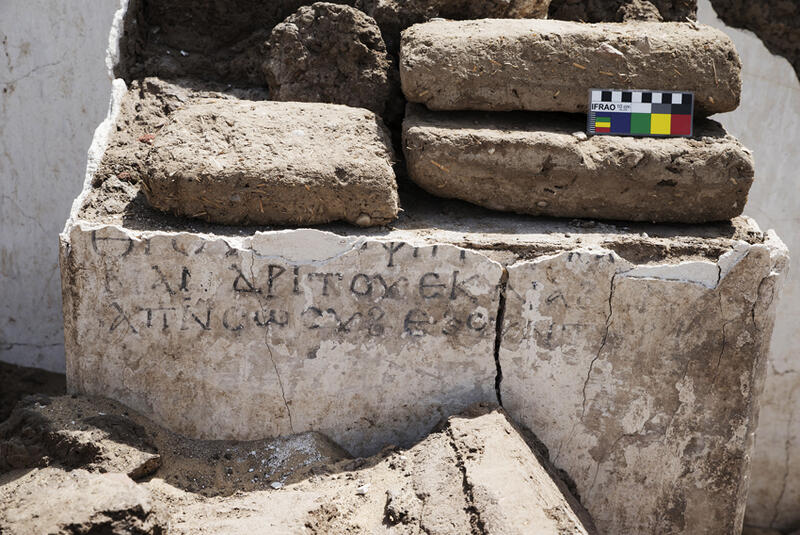 Investigation of how the placement of wall writings related to the use of monastic space has been an important aspect of this epigraphic research and may be illustrated by two examples, one from the Refectory and the other from the Six-Pillared Hall. A number of the dipinti preserved in the Refectory (fig. 9) are contiguous with or adjacent to the circular seating emplacements around low tables. These dipinti would have been easily accessible and visible to monastics seated there for meals, helping to frame the social function of the space as a room dedicated to communal gatherings and the distribution of food and drink.[11] 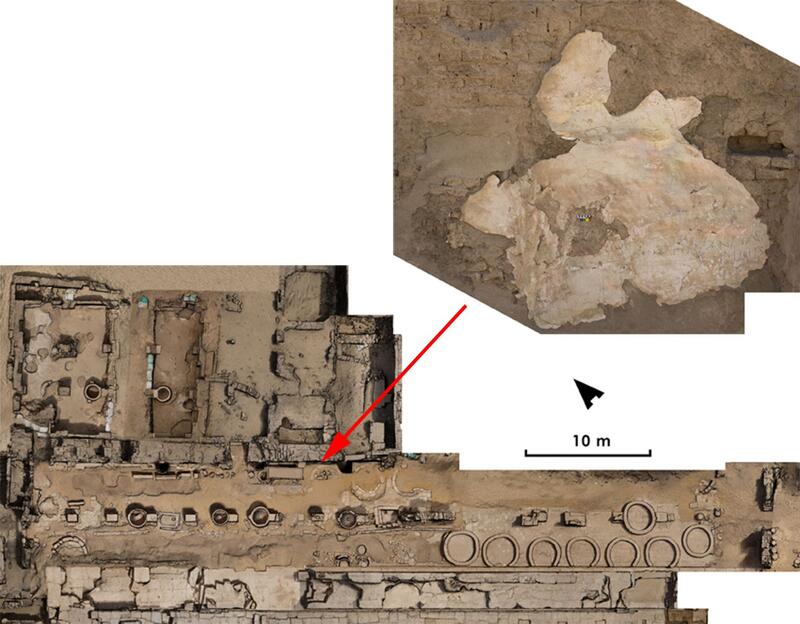 Figure 9.  Positioning of the dipinti (top) in the Refectory (bottom), directly adjacent to a seating circle. Photography, photogrammetry and DStretch colour-manipulation by Alberto Urcia.

In the Six-Pillared Hall two of the surviving dipinti—the prayer associated with Shenoute’s name and the prayer of Anastasia—were written opposite each other on facing surfaces (fig. 9). The texts also feature grammar and terminology that deliberately echo each other.[12] Both of these cases vividly demonstrate the interactivity of wall writings, architectural space, and social practice, and this kind of material “entanglement” is integral to the study of material culture at sites like that of the women’s monastery at Atripe.[13] 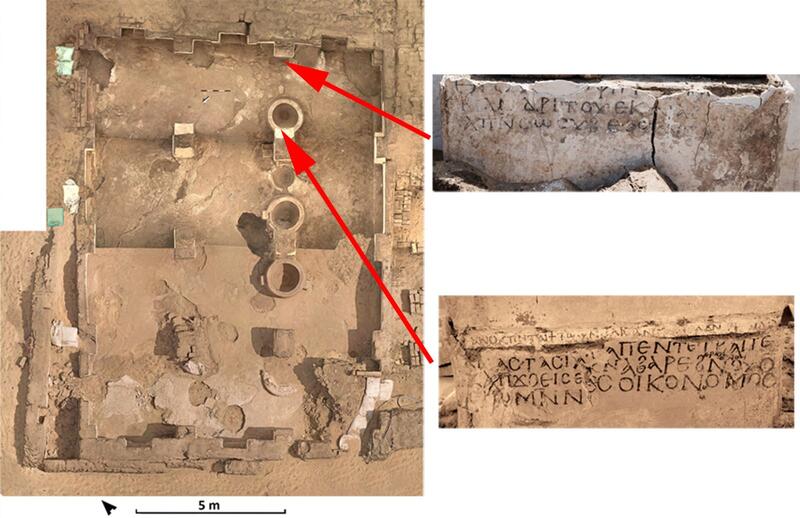 Figure 10.  Opposing positions of the prayer in which St. Shenoute is named (top right) and a pair of writings associated with Anastasia (bottom right) in the in the Six-Pillared Hall (left). Photography, photogrammetry and DStretch color-manipulation by Alberto Urcia.

[1] For a more detailed report on the results of this epigraphic study, see Stephen J. Davis, “Anastasia, Thecla, and Friends: Archaeological and Epigraphic Evidence from the Shenoutean Women’s Monastery at Atripe,” Le Muséon 133.3–4 (2020), 259–287.

[2] Davis also conducted a preliminary survey of papyri and ostraca excavated by both the Tübingen and YMAP-South teams. He was assisted in the study of the latter by Stéphanie Machabée (2019). These materials will be studied further, edited, and jointly published by Anne Boud’hors of the Centre national de la recherche scientifique (CNRS) in Paris, the principal papyrologist for the Tübingen project.

[3] For DStretch, see https://www.dstretch.com/. This software was originally designed for use with rock art but is now used much more widely. For other uses by YMAP, see the “Yale in Egypt” webpage on painting conservation at the White Monastery. For other examples, see J.-L. Le Quellec, F. Duquesnoy, and C. Defrasne, “Digital Image Enhancement with DStretch®: Is Complexity Always Necessary for Efficacy?,” Digital Applications in Archaeology and Cultural Heritage 2 (2015), 55–67; L. Evans and A.-L. Mourad, “DStretch® and Egyptian Tomb Paintings: A Case Study from Beni Hassan,” Journal of Archaeological Science Reports 18 (2018), 78–84; and S. Lahlil, W. Li, and J. M. Xu, “Crack Patterns: Morphology of Ancient Chinese Wares,” The Old Potter’s Almanac 18.1 (2013), 1–9. For ImageJ, see https://imagej.net/Welcome.

[13] On the concept of “entanglement,” see I. Hodder, Entangled: An Archaeology of the Relationships between Humans and Things (Oxford and Malden, MA: Wiley-Blackwell, 2012).