The Borg el-Hamam is a pillar-like outcrop of stone in the southern portion of the Wadi Hilal, inscribed primarily on the east and west faces with a combination of Predynastic and Old Kingdom rock and inscriptions, along with a few of apparently New Kingdom date. Concentrating on a complete photographic and epigraphic documentation of the site, we have now completed 3-dimensional modeling of the site and epigraphic recording of the inscriptions (see the description of the technique below).

The rock art and inscriptions divide into twenty-two panels, the majority of these being low on the west face of the rock, with most of the remaining images and inscriptions at a higher level on the east face. Three of the panels at the Borg el-Hamam are complex tableaux of Predynastic date. The following paragraphs highlight a few of the inscriptions. 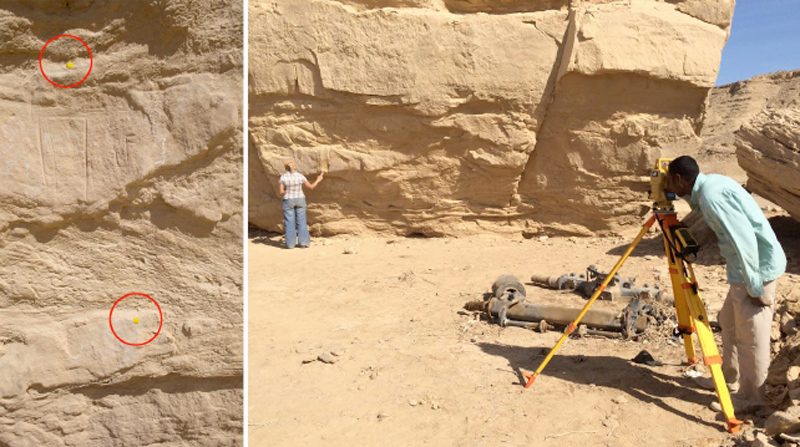 Predynastic Tableaux: Inscriptions 20a, 20b, and 21

Carved at a height of 5m above the current ground level, high on the east side of the Borg el-Hamam, are three panels of pecked and partially incised depictions of Predynastic date. These panels employ iconography to express concepts of the solar cycle, with later artists commenting upon earlier images. Through careful study of the resulting palimpsests we have been able to determine the chronological progression of the images. 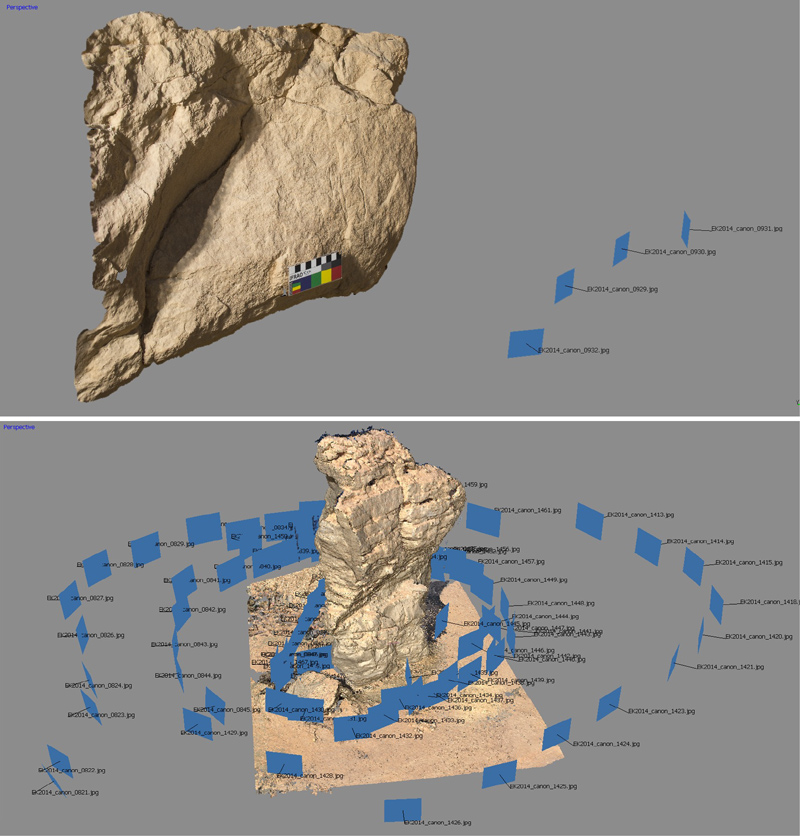 In adjoining inscriptions 20a and 20b, the earliest carvings are giraffes facing to the left. While the small giraffe is densely pecked, the other giraffe is partially eroded; both animals have partially incised necks. Panel 20b has a large pecked giraffe over whose neck is carved a boat. This and three other boats constitute the next phase of decoration. The lowermost boat appears in association with a large bull, who may stand atop a standard.1 In Inscription 20b a small, incised bull stands over one of the cabins.2 Donkeys dominate the next two phases of the panel — a series of pecked and primarily left-facing donkeys followed by two incised and smoothed right-facing donkeys at the far right of the tableau. Of uncertain chronological attribution are an elephant and two gerenuks. The pair of gerenuks stand with their tails almost touching, with their heads turned in towards one another; between them is an incised, circular feature. This juxtaposition of images is reminiscent of the layout of decorated Naqada III palettes, which display opposed pairs of animals. This pairing of animals culminates in the intertwined necks of the two serpopards on the verso of the Narmer Palette. A final phase, evident only in Inscription 20b, consists of several incised vultures, avatars of the goddess Nekhbet (see further below). 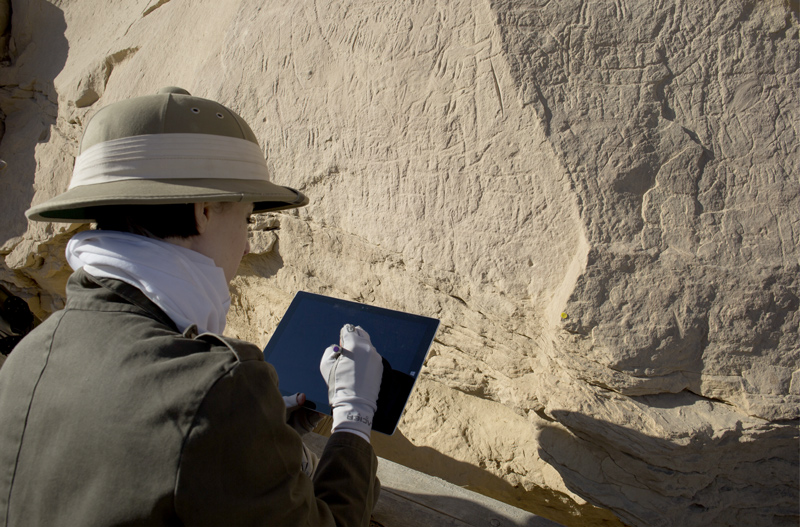 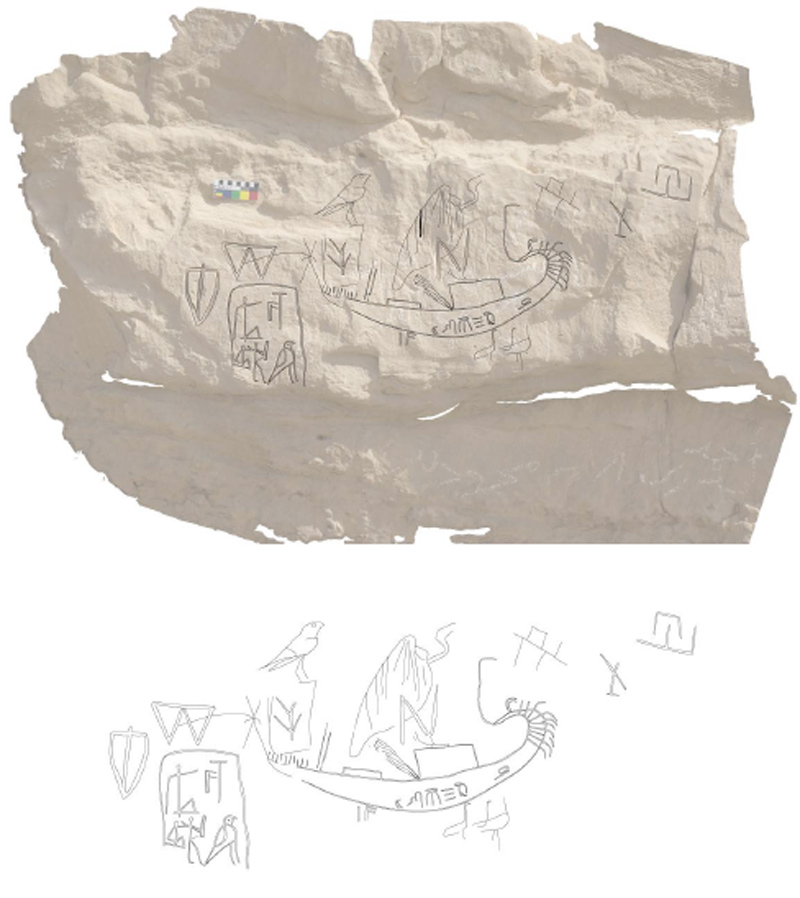 Further to the north along the eastern face of the Borg el-Hamam is Inscription 21, also dominated by zoomorphic images. The upper left hand portion of the tableau contains no palimpsests and consists primarily of donkeys and canids. Four anthropomorphic images are interspersed among the animals; stylistically, the human figures range from an incised “ghost”-like depiction3 to a simple pecked outline4 to a more elaborate pecked figure with beard and staff. The lower left hand portion of the tableau contains an incised boat with an unusual boat standard. Finally, the lower right section depicts additional donkeys and two sets of curving lines that may represent a hunting enclosure.5 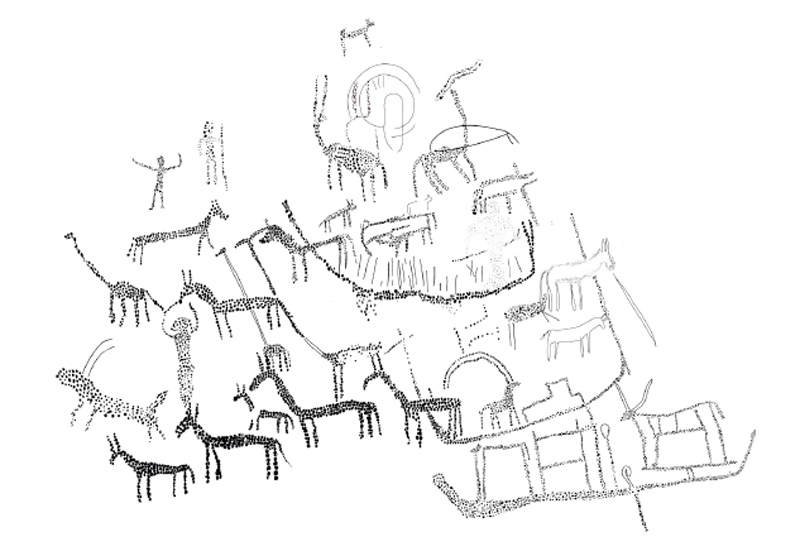 Inscription of the Horus Qa-‘a

An important inscription on the southeast portion of the Borg el-Hamam is the image of a falcon atop a serekh, within which is the name of the last ruler of the First Dynasty — Qa-‘a.6 The falcon and serekh face right, opposite a left facing image of the vulture of the goddess Nekhbet. Between the serekh and the Nekhbet vulture are four signs, apparently written in counterclockwise order, beginning in the upper left and writing “given life and dominion forever;” the arrangement of the text between royal serekh and deity mirrors the arrangement on a seal of the reign of Khasekhemewy.7 The relatively squat appearance of the di-sign is well attested in the corpus of Archaic Period hieroglyphs; although the use of the sign for the verb is otherwise of Second Dynasty date, such a use at the end of the First Dynasty is not entirely unexpected.8 The appearance of the cobra is that of Regulski’s Outline 2, with a stronger curve than the earlier form, the Outline 2 version appearing during the reign of Narmer and ultimately becoming more common than the flatter Outline 1 during the Second Dynasty.9 This serekh of Qa-‘a fits well with evidence from other desert sites for Qa-‘a’s special interest in the Eastern and Western Deserts, and the routes thereof.10

A number of deeply carved signs, some related to known hieroglyphs, appear across the surface of the east side of the Borg el-Hamam, carved at roughly shoulder height on the surface. These images appear with the same carving style and patination as the apparently Fifth or Sixth Dynasty name of the priest Hornakht (Inscription 8). The same roughly triangular mark with central vertical line that is carved next to the priest’s name also appears below the Sixth Dynasty inscription N 29 in the Wadi Hilal (Elkab VI pl. 65). Similar signs appear elsewhere at Wadi Hilal inscription sites (compare N 40, correcting the description in Elkab VI p. 59). Such marks, apparently related to similar pseudo-hieroglyphic marks on ceramic vessels, are attested at distant desert sites, such as the region of Abu Ballas southwest of Dakhla Oasis.11 The evidence from the Borg el-Hamam, in conjunction with that from Abu Ballas, suggests that the marks relate to the activities of Old Kingdom caravans in the area. The Borg el-Hamam signs reveal a consistency of site marking activities between the Eastern and Western Deserts during the late Old Kingdom.