Rock Art Sites West of the Temple of Smithis

The east and west faces of the rock bear several depictions, most of these concentrating on a large panel on the east side.1 In addition, two detached blocks of stone on the east side, and one on the west, also bear carvings.

The most impressive and important depictions at the site EK 48 belong to a palimpsest on the east side of the rock, and the majority of these involve Naqada II and Naqada III depictions of boats. Five Naqada II Period sickle-shaped vessels were wholly or partially carved in the area. The prow with hanging element of a large boat appears in the lower left of the area, most of the vessel having been eroded away by a large area of rock spalting in the lower middle portion of the east side of the rock. Another, smaller vessel appears to the right; that boat, with two deck structures, may not have been finished. Another small sickle-shaped vessel appears in the upper middle portion of the panel, having two large deck structures. This latter vessel was partially erased in order to accommodate the largest and most complete of the Naqada II Period vessels. To the right of the stern of the large and complete Naqada II boat is what appears to be the pecked end of a fifth, apparently unfinished, Naqada II vessel. 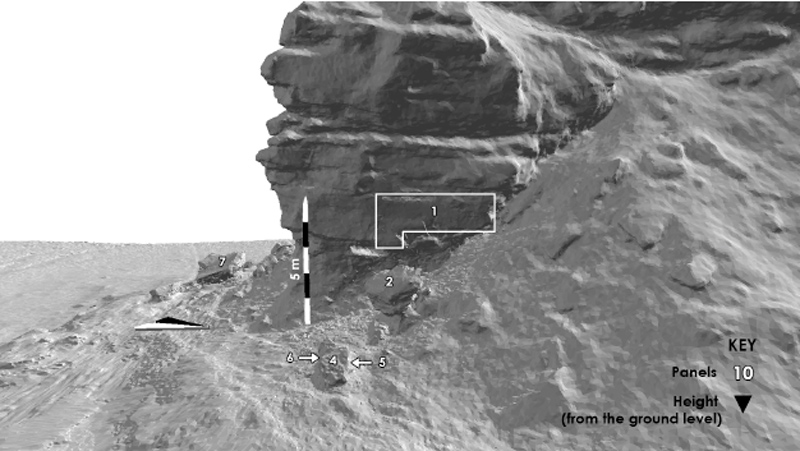 Facing right, the largest Naqada II boat at the site has a large, hanging “bumper” element on the prow (left), two curving, frond-like elements emerging from the prow, with a small bull standard in front,2 two deck structures amidships, and two essentially round-bladed steering oars to the right. The expected rowing oars are present, emerging from below the hull to the prow and stern, with the usual gap in the middle; these oars are not pecked, however, but appear merely as narrow incised lines. Over this earlier vessel is a large, animal-headed boat of Naqada III date.

The Naqada II Period boat has a crew, with a dancing woman above, incised in the manner of the rowing oars. That the figures belong to the original design for the vessel is clear from the initially pecking of the first figure to the left — although the artist stopped after pecking the lower portion of that man, the feature indicates an original intention to transform the initial scratched images from sketches into final pecked versions.3 The incised figures are partially pecked, indicating, as does the style of the figures, a date at the cusp of the Naqada II and Naqada III Periods. The third figure from the right, holding a long staff, has a body that tapers to the body and merges with the right leg, while the left leg is added as a thinner line, a feature also appearing in the painted decoration of the Naqada II Period.4 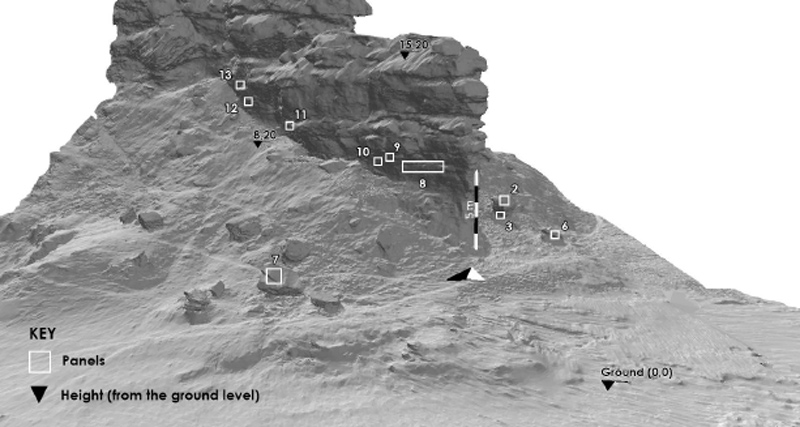 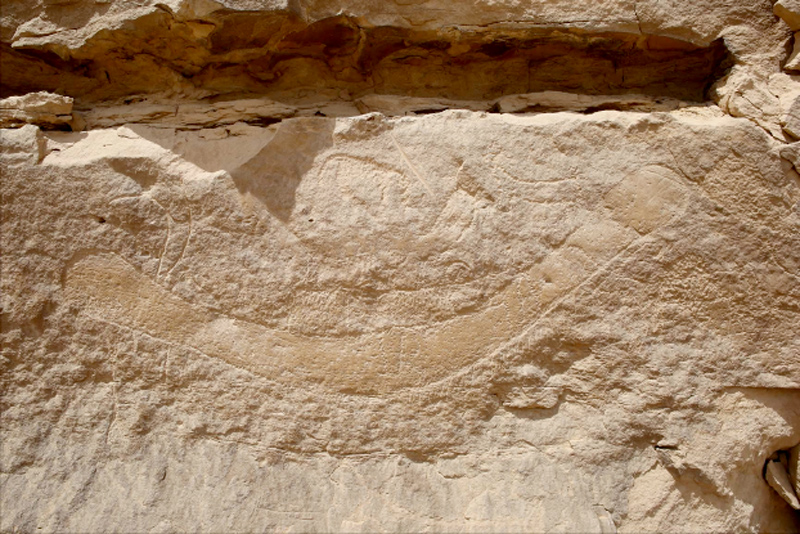 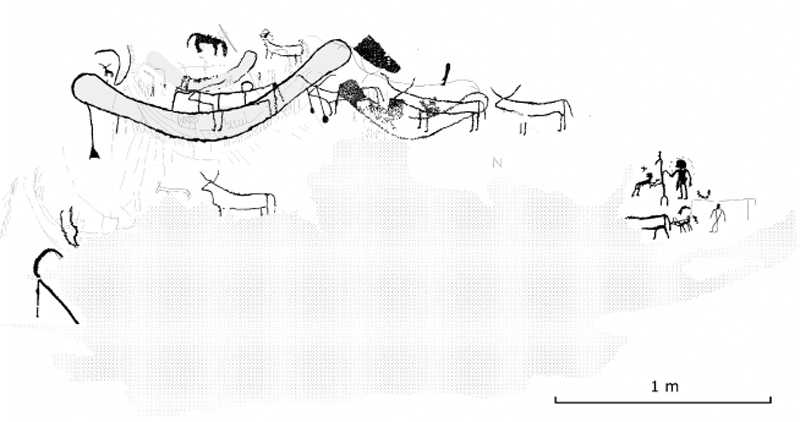 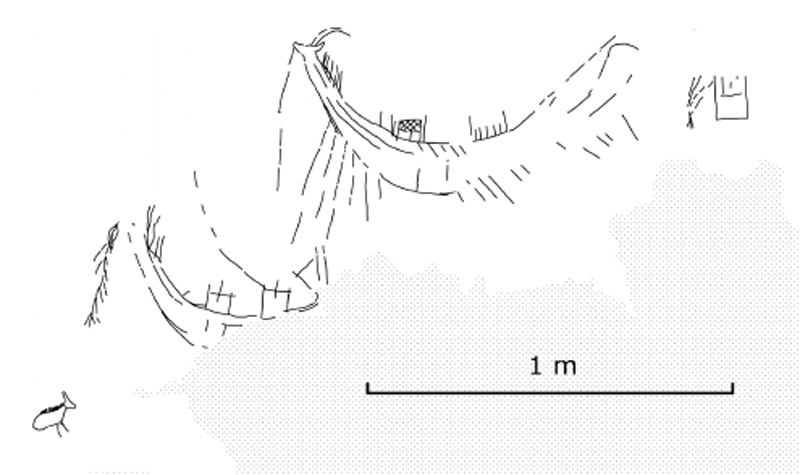 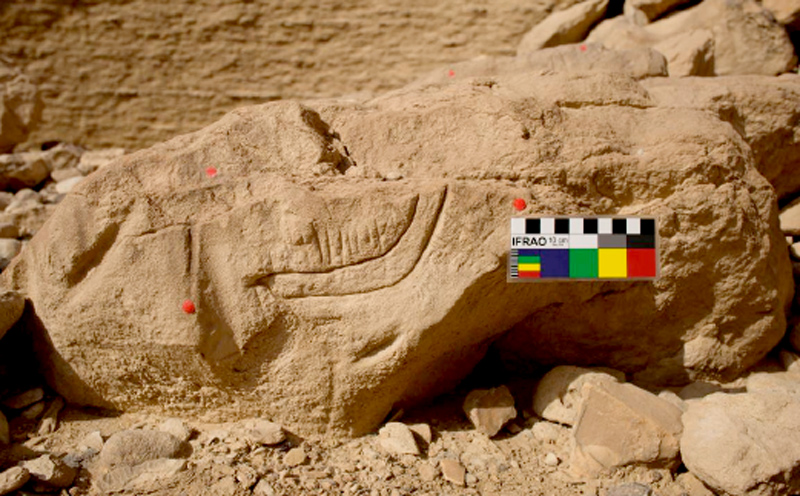 Three of the figures wear tall plumes, curving to the left and extending for at least the equivalent of the height of the figures, apparently intended to represent ostrich feathers. Such headdresses are not uncommon in depictions of human figures (often associated with depictions of boats) in the rock art of the Eastern Desert,5 but are all but absent — albeit present at least once — in the depictions on Naqada II painted vessels.6 The figures atop the Naqada II boat at the Wadi Hilal site, based on Graff’s7 categories for the D-Ware decoration, are:

The rightmost figure is well to the right of where the steering oars might be on the later, incised Naqada III vessel, yet precisely in alignment with the rightmost of the two steering oars of the Naqada II boat. The presence of an additional feather-wearing male figure above the small Naqada II boat, indicates that the figure near the large Naquada II vessel indeed belong to that carving, and predate the Naqada III vessel.

During the Naqada III Period, an artist carved at least two boats and additional images, near and over the earlier flotilla. The larger Naqada III vessel is scratched directly over the larger Naqada II boat, as though the later artist consciously intended to update and replace that earlier image. The later vessel has a deck cabin to the left, and a series of vertical lines between two taller posts to the right. Close parallels to the animal-headed vessel appear at the Wadi Arqub Baghla and the Wadi Magar rock inscription sites west of the region of Qamûla and Naqada.8

The smaller, lower vessel with high upturned prow is similar to the ritual vessels in the Nag el-Hamdulab cycle, and lines near the inner (right) top of the Wadi Hilal vessel’s prow are identical to the contours of the schematized bull’s head with horns on the Nag el-Hamdulab vessels. This smaller vessel parallels the smaller Naqada II boat to the right of the larger Naqada II vessel, and fits with a pattern of depicting a riverine procession in syncopated fashion by representing a larger vessel and a smaller tender boat.9

A number of later animal depictions were carved over the earlier nautical images; these later depictions include a line of pecked cattle across the middle of the tableau. The image of a vertically oriented knife accompanying the cattle finds a parallel in one of the tableau of the Nag el-Hamdulab rock art cycle,10 itself of First Dynasty date. Beneath the line of cattle are another pecked bovid and an incised donkey to the lower middle. An incompletely pecked horned quadruped appears above the stern of the large Naqada II boat, facing a deeply pecked depiction of a donkey, head lowered to right. A deeply incised line, slanting down to the right above the head of the donkey, appears to represent the stick that symbolically controls and occasionally touches images of donkeys in Predynastic rock art.11 A more lightly incised, larger bovid appears to the right. To the lower right of the main portion of the tableau are other images, including a depiction of a man holding a scepter, facing a bowing figure.

At the head of another wadi, a short distance west of the speos, we have recorded a small collection of late Predynastic boat graffiti (WH-6). These are remarkable for their location, difficult of access, with one of the vessels carved high within a waterfall area. The small ensemble, and its association with an area of the waters of occasional cloudbursts flowing off the desert after a rainstorm, may provide a glimpse at early religious associations of some aspects of the Wadi Hilal. The carving of animals on end at the lower portion of the site (WH-5), in an area washed by occasional cloudbursts, associated with the depiction of a high-prowed boat, indicates an association of the area of occasionally cascading rainwater with the control of chaotic forces, as much later, post-pharaonic temple inscription indicate for the rain spouts — gargoyles — of Egyptian temples.12