On the north-south ridge just west and south of the main bakery area, four 4 x 4 meter squares revealed extensive architectural remains, including walls preserved nearly to a meter in height, a large brick platform (possibly the base for a semi-permanent structure), and evidence of an earlier building period.

The corpus of ceramic material is entirely consistent with that from the bakery area to the northeast, although the number of bread molds is much lower, and open forms are less markedly predominant. 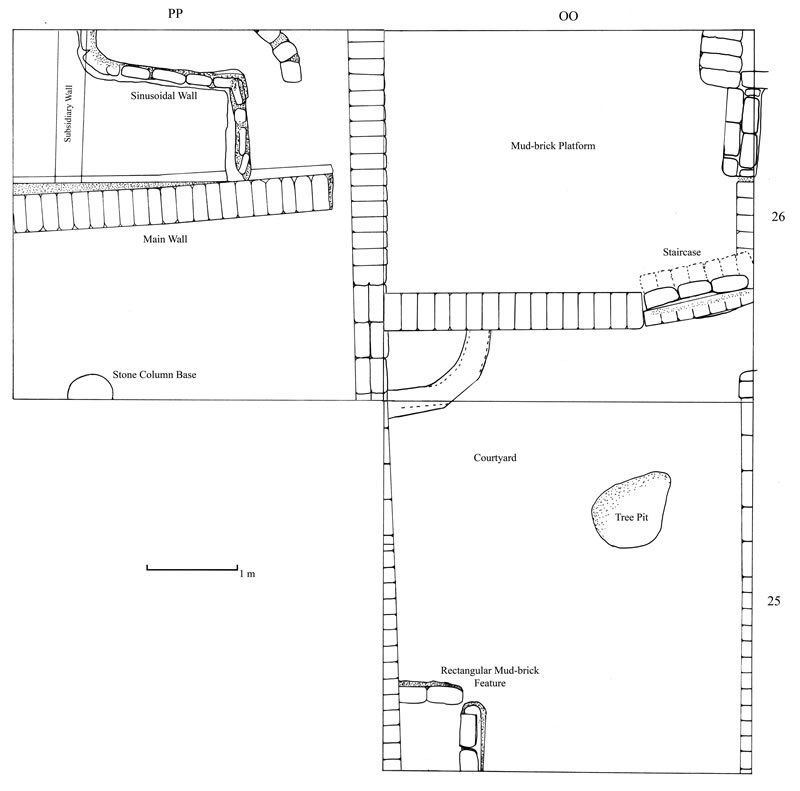 These three adjoining 4m x 4m squares revealed part of a mudbrick platform with the remains of a stairway ascending its southeast corner, and a courtyard to the south (Figure 1). Like all of the buildings and the main walls at Umm Mawagir, the platform is oriented almost exactly to the cardinal points, suggestive of an overall orthogonal plan for the site. To the south of the platform is a small courtyard with a quarter-circle emplacement lined with mud-brick1 in the northwest corner (Figure 2). The main artifacts around this emplacement and along the south wall of the platform were conical jar stoppers made from coarse local clay. East of this emplacement is the courtyard entrance and a small tree pit. At the southeast end of the cleared portion of the courtyard, we uncovered the northern part of a small, low platform that may have functioned as the base for a chair (Figure 3). The apparently rectangular north-south oriented courtyard area with a small dais in the middle of one of its long sides resembles the so-called “office room” in the house of the commander of the Middle Kingdom fort at Buhen.2

Squares OO26 and PP26 reveal a mud-brick platform with subsidiary walls to the south and west (Figures 1, 2); the platform itself is constructed in casement style and is bounded by walls on the three exposed sides. Whereas the west and south walls are the thickness of a single header and composed of alternating headers and stretchers, the east side is larger and has a rounded end to the south, leaving an opening that was later blocked. Although casement walls could be constructed in the same manner as freestanding walls, the presence of a blocked doorway and variation between construction techniques implies the conversion of an earlier structure or portion thereof into the retaining walls of a solid mud-brick platform. 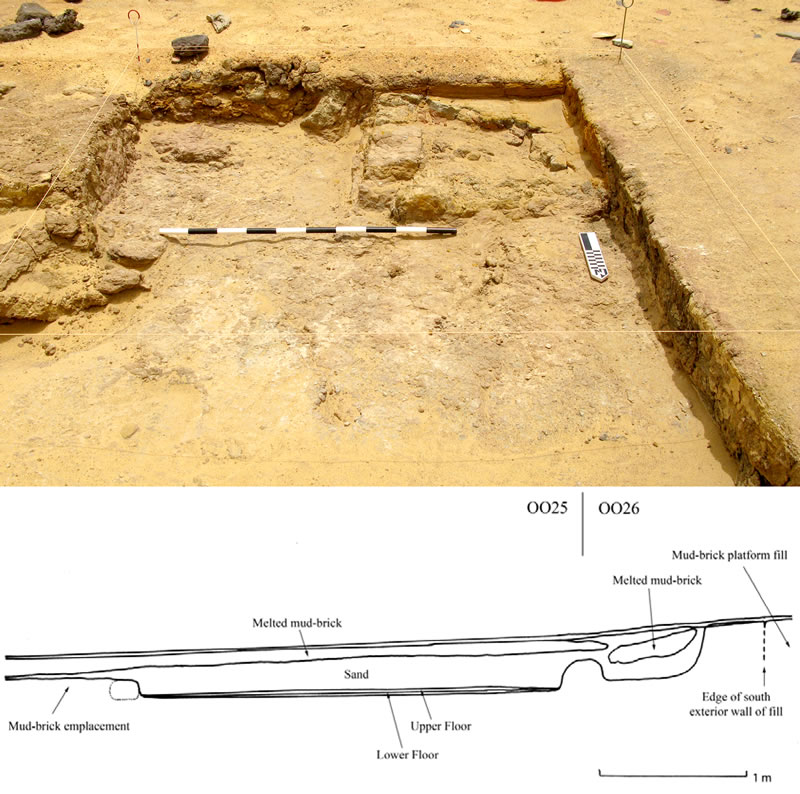 On the western side of the platform, an east-west wall of one stretcher thickness roughly divides square PP26 in half (Figure 4). Compacted layers of ash and ceramic remains appear to indicate a rapid deposition of debris both north and south of the east-west wall. North of the wall (Figure 5A), a series of living surfaces with subsidiary walls, culminate in a mud-plastered floor atop the gebel surface. Before the initial layers of deposition and the construction of the east-west wall, the builders of Umm Mawagir constructed a sinusoidal wall. The portion of the sinusoidal wall visible in PP26 appears to be oriented southeast to northwest, as opposed to the essentially South-North orientation of the main structures from the floruit of the Umm Mawagir site. The closest parallels to the underlying sinusoidal wall at Umm Mawagir is the sinusoidal wall beneath the Middle Kingdom fortified settlement at Qasr es-Sagha3 and that underlying “South Wall Street” in the inner town of Buhen fortress.4 The wall in PP26 sits atop a foundation course of one to two bricks in thickness, and crosses the sinusoidal wall, the top of which is essentially level with the top of the foundation wall. Atop the gebel surface at the southern end of PP26 we exposed a portion of a stone column base, a proper understanding of the context of which must await future excavation.5 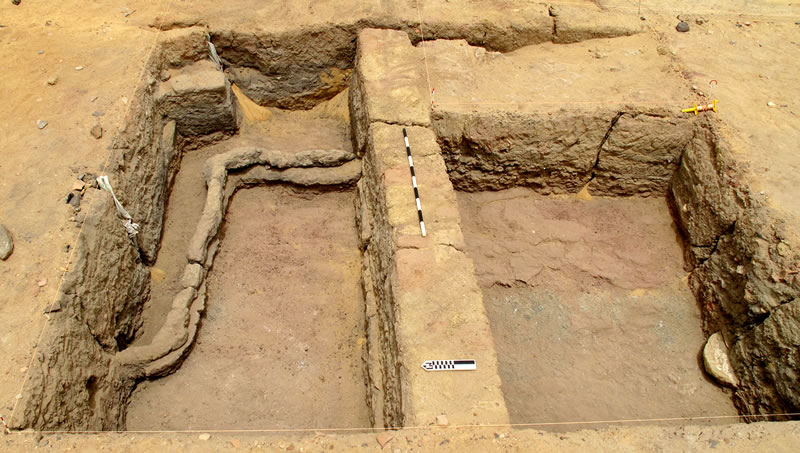 Square SS25 revealed a similar sequence of activity as that in PP26 (Figure 5B): the uppermost sand layer and surface ceramics (Level 1) cover a packed level of ash, with several areas of white ash with interspersed salt crystals (Level 2). Between Wall A and Wall B, particularly in the southwest quadrant of square SS25, Level 2 ash overlies a hard-packed layer of melted mud-brick (Level 3). The absence of preserved brick outlines in Level 3 suggests that the broken mud-bricks were pounded down to create a living surface or basis for later activities. Below this level is another thick deposition of ash and ceramic remains (Level 4), including several nearly complete double-bodied and single bread molds, that collected around a wall only a single brick thick. This lower wall (Wall D’/D’’) finds a close parallel in the sinusoidal wall in square PP26, particularly as Wall A and Wall B were constructed atop the smaller wall, like the main east-west wall in square PP26.