The present surface of the areas in the northern portion of Umm Mawagir excavated during the 2008—2009 field season is a thin (2-4 cm) layer of wind-blown sand covering the top level of ancient remains (Figure 1).

Outcrops of shale define the north and east borders of the activity surrounding Structure A (Figure 2); test excavations revealed that the pharaonic surface of the site sloped from north to south to a greater extent than the present surface. A small runnel crossed the northern portion of Squares I31, J31, and K31, resulting in a slope down to the north in the original surface of Square J31 (Figure 3).

A gently sloping sand dune covered the surface of the northern portion of the site, and the original activity at the site occurred atop this dune in the south, and directly on the exposed gebel surface to the north. 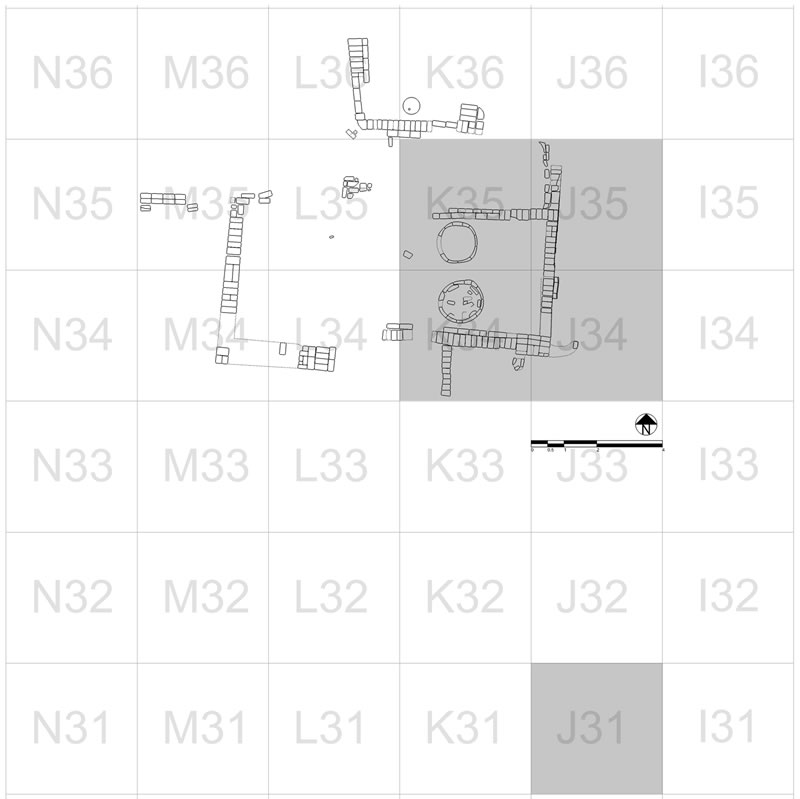 The principle activity in the north portion of the site was bread baking. The earliest material at the site — prior to the construction of Structure A — consists of one to four distinct layers of primarily ash and ceramic material. Although in Square J35 this layer (Level 3) underlying the northern portion of the east wall of Structure A is only 16 cm in depth, the same activity level in Square J31 is 65 cm in depth, and consists of several distinct sub-levels — Levels 4B through 7. Although much of the original baking at the site may have occurred in open hearths, a small section of mud-brick wall underlying Wall E in Square J34, a post-hole in Square K34 below Wall F, and another adjacent to Wall E in J34, reveal the presence of a (semi-permanent?) structure at the site prior to the construction of Structure A.

Investigations during the 2008-2009 field season focused on the southeast corner of Structure A, the east and south walls thereof, and a room (Room I, at least 4 x 5 meters square) that contained two circular features (Features 2 and 3) (Figure 4). Structure A was built directly atop the original spread of compacted debris (Level 3).1 Each wall is preserved up to the height of three courses of bricks, laid as alternating courses of headers and stretchers.2 The south wall of Structure A (Wall F) is thicker than the other walls; a projecting course of foundation bricks to the south was probably intended to counteract the overall north-south slope of the ash and sherd layer underlying the eastern wall (and probably the entire structure). During the period of use of Structure A, similar layers of primarily ash and ceramic material continued to develop around and within the building (Figure 6, Level 2). The construction of Structure A atop an ashy layer, and the tolerance of ash build-up within the structure, might have both been conscious choices, reflecting an understanding of the ability of ash to act as an insecticide.3 Mounds of debris, apparently removed from Structure A, cluster in the southern portion of the site. Although large quantities of material appear to have been removed from within and near the building, the intensity of activity within and around the structure resulted in the deposition of approximately 8 to 12 cm of hard-packed ash and sherds within Room I.

The activity in Room I centered on two round features, which the fire-hardened surfaces beneath them, and the quantities of ash surrounding them, mark as ovens, apparently used in the preparation of bread (Figure 7A). The bases of the ovens sit atop Level 3, the same layer of ash and sherds underlying the main walls of Structure A (Figure 7B). A circular wall of mud-brick, filled with brick rubble and packed earth, formed the bases of the structures. Although the upper, functional portions of the ovens are now missing, parallel structures elsewhere suggest that the round bases supported beehive-shaped superstructures. Comparative ovens/kilns appear in the early Middle Kingdom settlements at Abu Ghalib,4 Kahun,5 Mirgissa,6 and Nag Baba,7 as well as in the Second Intermediate Period fortress at Tell Heboua.8

Bread made in the ovens at Umm Mawagir probably consisted of small loaves baked in molds placed atop ash on the lower working surfaces of the ovens, and flat bread baked directly on the inner surfaces of the beehive-shaped superstructures. The local fabric of the bread molds suggests that the bread ovens might also have served a dual purpose as oven and kiln (cf. Nicholson 1993: 112-113), a suggestion that finds some support in the discovery of the remains of two potter’s wheels in the same area. The often astonishingly thick spread of material across the site in the levels of earliest activity suggests frequent use of open burning/cooking pits across a wide area. Such activity continued even after the construction of the mud brick building and its ovens, particularly apparent as a series of open burning pits along the eastern side of the structure. The subsidiary walls that sit atop the ash and sherds that accumulated after the construction of Structure A further attest to continued activity outside of Structure A. These different types of baking, occurring simultaneously at Umm Mawagir, correspond to the Egyptian terms psi, “to bake (in a vessel),” and sqfn, “to bake (in ash).”9

The northern edge of the site has evidence of sparser activity and preserves the remains of a large stone mortar — the interior depression hemispheric in cross-section — possibly employed in removing the outer husk of grain prior to the production of flour (Figure 8A).10 The middle area of the northern part of the site is dotted by the remains of grinding stones (“saddle querns” or rahays), no doubt originally placed on mud-brick and plaster platforms11, and employed in the grinding of the dehusked grain into flour (Figure 8b). 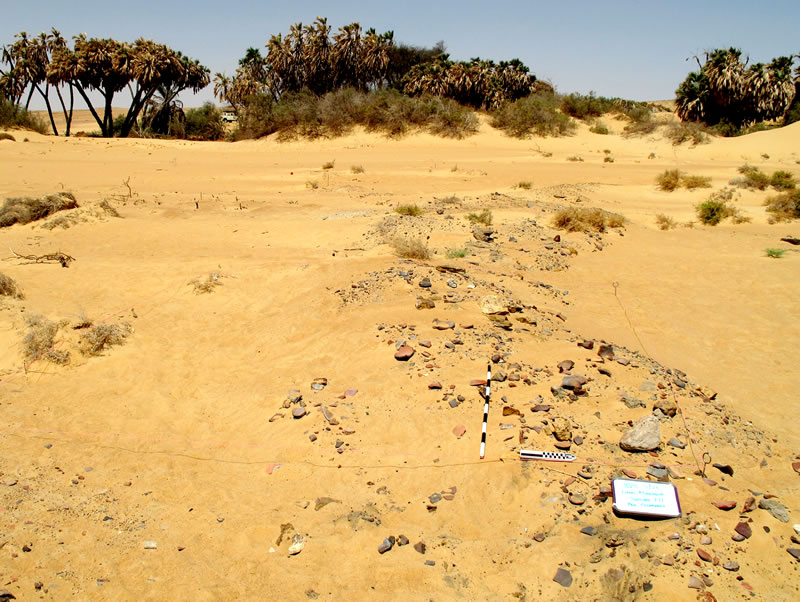 Near the eastern tip of a curving line of debris stretching from Squares I30 to M32, along an essentially northwest to southeast line, Square J31 revealed an unexpectedly dense pack of baking debris (Figure 9). The debris in J31 consists of a dense pack of sherds in ash with some sand (Level 2), lying atop a thin layer of sand and small, apparently water-borne pebbles (Level 4A), atop a deep accumulation of sherds and ash representing the initial activity across the entire site (Levels 4B through 7; Figure 10), being similar in composition to the layer of ash and sherds underlying Structure A, and more hard packed than the upper debris pile. The loosely packed, upper debris spray appears therefore to belong to debris cleared out during the use of Structure A; the sand and small stones atop the lower levels represent the period of construction and early use of Structure A, before intensive debris dumping resumed in J31. All sherds from Square J31 were categorized by vessel and fabric type and then weighed to calculate percentages for different vessel classes (Figure 11A). The majority of sherds by weight (60.3%) were bread molds — the large, single bodied molds and double, “cup-cake” molds (Figure 11B). Jars represented 23.1% of the assemblage by weight, while small open forms, cups and spouted bowls predominately, were 9.5% by weight; considering their smaller sizes of the latter category, the small open forms were most likely second in terms of vessel numbers. Finally, zirs comprised only 7.1% of sherds by weight, indicating that the bakery area had only a small number of these large storage vessels.

The thick spread of material across the site in the levels of earliest activity suggests frequent use across a wide area of open burning/cooking pits. Such activity continued even after the construction of the mud brick building, particularly apparent as a series of open burning pits along the eastern side of the structure. In Square J35 a large, roughly circular burning pit has had several smaller pits dug into its south and southeastern edges, revealing activities of differing scale at the site.