West of the Church of St. Shenoute, there are archaeological remains associated with food production and distribution.

The western archaeological area of the White Monastery extends from the west end of the Church of St. Shenoute to the western enclosure wall (fig. 1). It was excavated by the Supreme Council for Antiquities (1989–1990, 2002, and 2011), and its finds include two substantial coin hoards.[1] Further investigation, recording, and documentation were carried out by Peter Grossmann (1989–2002) and the Consortium (2000–2007). YMAP’s work in this area has been ongoing since 2011, and Louise Blanke’s research has contributed significantly to our understanding of its role in the history of monastic life at the White Monastery Federation.[2] 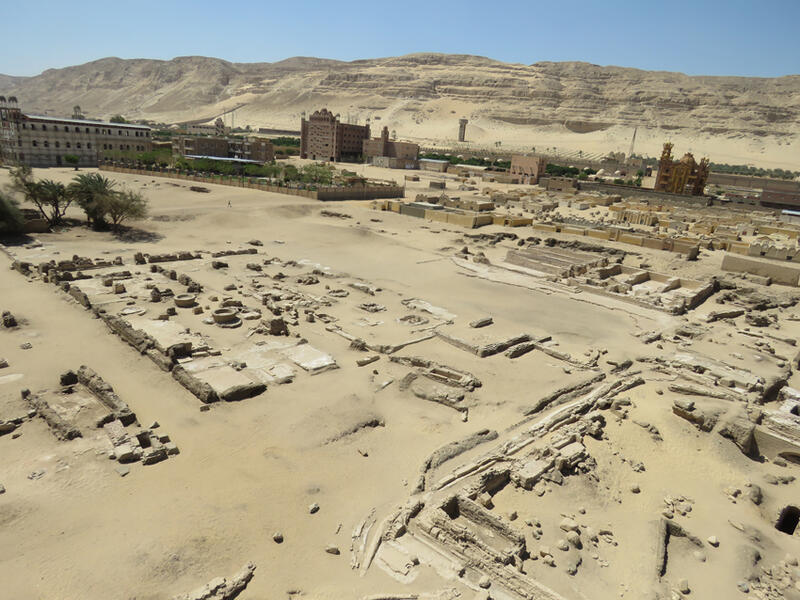 Figure 1. The western archaeological area as it appeared after cleaning in 2019, looking south-west.

The first phase of the Consortium’s work involved recording and interpretation by Peter Grossmann and Darlene Brooks Hedstrom, in collaboration with members of the Egyptian excavation team (2000–2004). They completed a program of photo-documentation, made plans of individual buildings, described their organization and construction, and provided preliminary identifications and interpretations of their different functions. [3] Coins and coin-imitation moulds from this area were studied by Hans-Christian Noeske and Johann Wolfgang.[4] Darlene Brooks Hedstrom’s surface survey of ceramics included vessels used in architectural settings and material in spoil heaps originating in the western archaeological area.[5]

The area was revisited by Darlene Brooks Hedstrom and Dawn McCormack in 2007 during the second phase of the Consortium’s investigations (2005–2007). The important task of mapping the entire area was begun, a painstaking process that Louise Blank completed in 2012, assisted by Elizabeth Davidson. Detailed re-examination by Darlene Brooks Hedstrom of buildings and their spatial relationships in comparison with other sites and written sources has allowed a more detailed evaluation of their function and organization. This work paid particular attention to the management of food and water within the monastery at the time of Shenoute and his immediate successors.[6]

Work continued in 2011–2012 by Louise Blanke and Gillian Pyke, assisted by Elizabeth Davidson, Mary Farag, and Daniel Schriever as part of the Yale Monastic Archaeology Project’s ongoing archaeological investigation of the monastery (fig. 2). The few objects and ceramics found during the YMAP investigations were studied by Gillian Pyke in 2015 and 2019.  3D laser scanning of the area was conducted in 2019 by Pietro Gasparri, assisted by Giovanni Tamburro and Massimo Carderi, with preparatory cleaning by Gillian Pyke, Sharif Munir Adly, Stéphanie Machabée (fig. 3), and archaeologists from the Sohag inspectorate of the SCA (figs. 3, 10 and 12). Photo-documentation associated with this work was completed by Gillian Pyke. Detailed archaeological recording of one of the most prominent buildings within the western archaeological area was begun by Camille Angelo (fig. 8), assisted by Morgan Ghattas in 2020, with photogrammetry by Alberto Urcia and epigraphic monitoring by Stephen J. Davis. 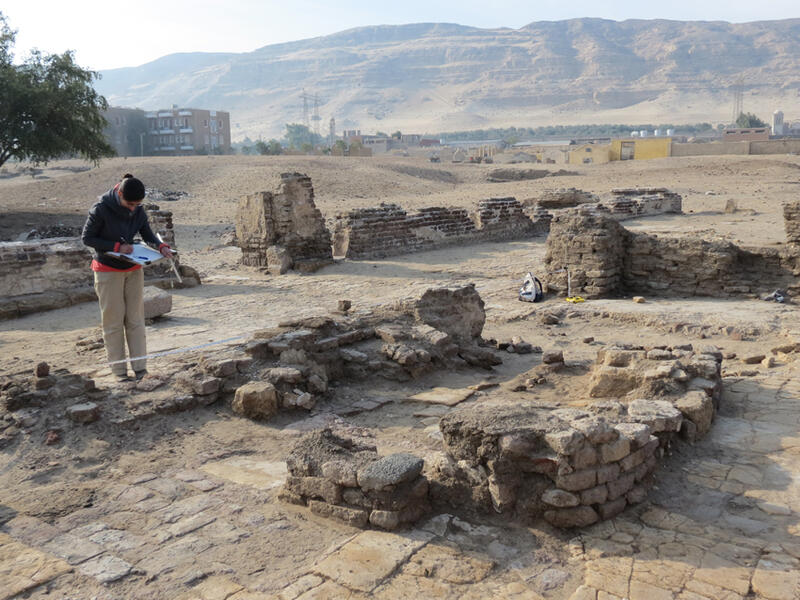 Figure 2. Mary Farag drawing a late feature in the south east part of the food processing complex in 2012. She is standing in the east-west hallway. 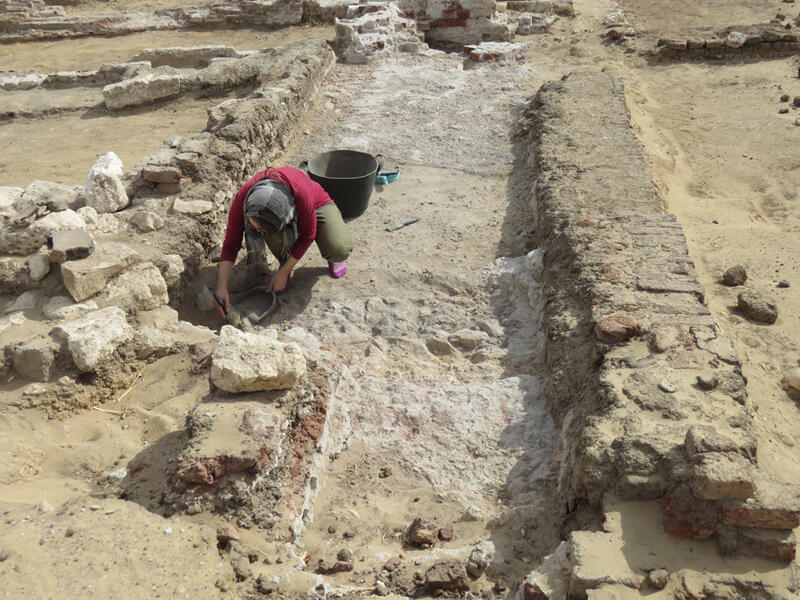 Figure 3. Stéphanie Machabée cleaning a feature in the northern part of the western archaeological area in 2019.

The large area of the SCA excavations has provided an unprecedented opportunity to investigate the components and organization of the wider monastery outside the Church of St. Shenoute. Traces of structures immediately to the west of the church are very poorly preserved but include a large hall with a series of piers surrounding a central rectangular area (fig. 4). This building has been interpreted by Peter Grossmann and colleagues as a refectory, which fits its location close to the church and to the kitchen and food processing area lying to the west on the far side of a north-south thoroughfare.[7] The date range of the coins found in a hoard under one of the limestone pavers of this building shows that it was built after the early seventh century.[8] 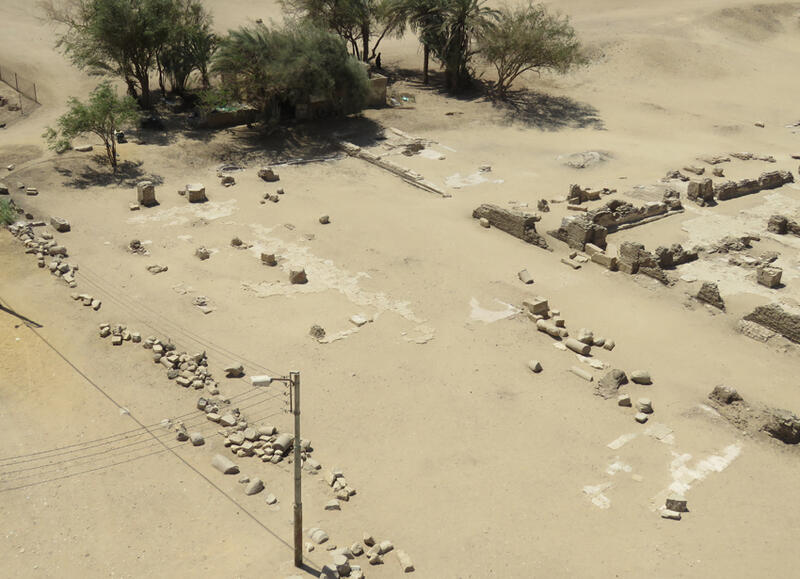 Figure 4. South east corner of the western archaeological area with the remains of a large hall (left), thoroughfare (center) and the water storage, kitchen, and hallway of the food processing area (top center and right) after cleaning in 2019, looking south west.

The buildings on the west side of the thoroughfare are better preserved than those on the east (fig. 5). They are accessed via a doorway off the western side of the thoroughfare opposite the probable refectory. This leads to a long east-west hallway that links the east and west parts of this area of the monastery, running the full length of the kitchen to the south and to the food-processing area to the north.  Differences in building materials and methods within the hallway suggest multiple modifications over time, while the same basic layout was retained.[9] Two equally-spaced doorways in the south wall of the hallway lead into the kitchen. The south side of the wall shared with the hallway has in-built ceramic storage bins, and there are heating installations with adjacent bread ovens set along the opposite wall that confirm the function of this space. A cistern located in the area immediately to the south supplied its water needs.[10] 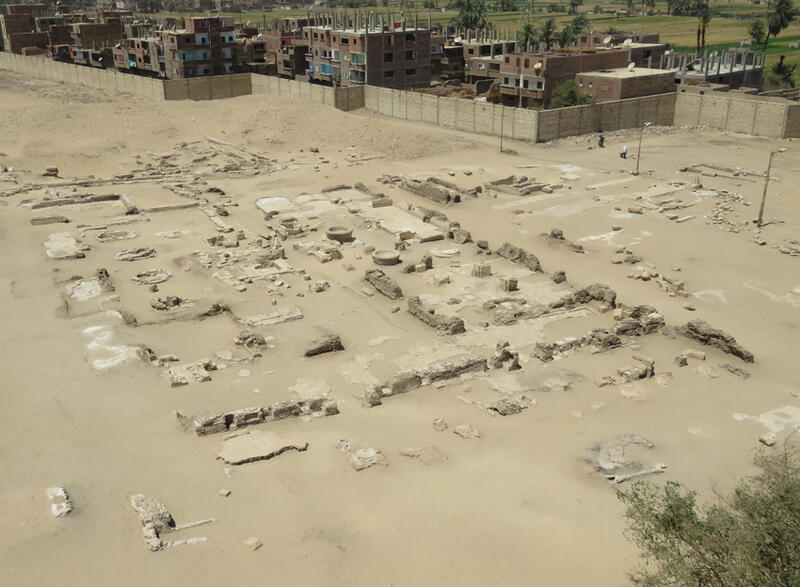 Figure 5. The food processing complex in the western archaeological area with the kitchen and hallway (foreground), olive crushing basins (center) and unidentified installations (left), after cleaning in 2019, looking north east. The thoroughfare is on the right and water-related features at the top.

The food-processing and storage complex to the north of the east-west hallway also shows signs of multiple modification phases, suggesting a long span of use (fig. 5). The architecture of the eastern part of the complex includes crushing basins (fig. 6; see also fig. 5); these, along with rooms possibly used for pressing and storage (including Grossmann’s “Four-Pillar Building”) point towards their association with the production of olive oil. At the height of production, probably in the sixth century or later, this required three crushing basins. Later, this was reduced to a single installation, perhaps due to a diminishment of the monastic and/or general population or an economic shift. The processes that took place in the western part of the complex are poorly understood because this set of five installations, which underwent a substantial change in design during their lifespan, has yet to be identified in function.[11] 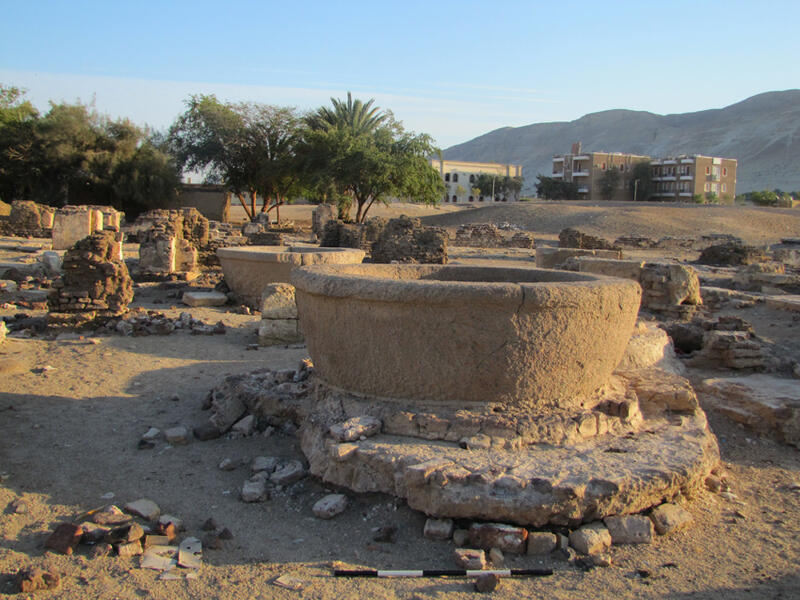 Figure 6. Crushing basins in the food processing complex as they appeared in 2012, looking south west.

A large rectangular open area with a smooth plaster floor lies to the west of the food-processing complex (fig. 7). At its western margin is a large free-standing building in a good state of preservation that has been the subject of multiple investigations. The most recent began in 2020 and comprised archaeological recording by Camille Angelo (fig. 8), assisted by Morgan Ghattas, with digital archaeological support from Alberto Urcia and epigraphic monitoring by Stephen Davis. 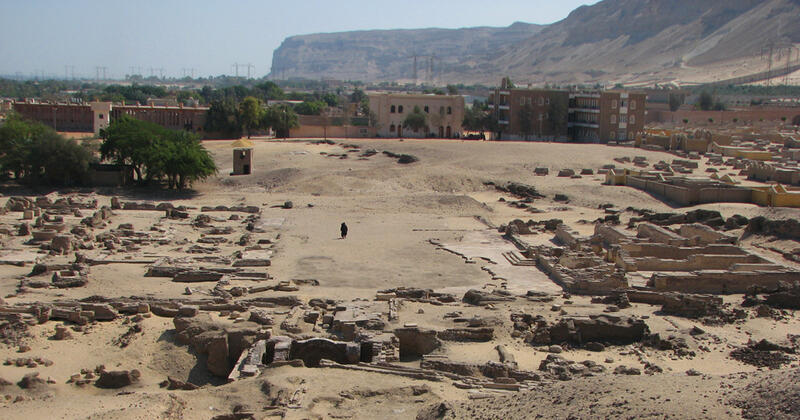 Figure 7. West part of the western archaeological area with the open area (center) and large building (right) as they appeared in 2008, looking south. The food processing complex is on the left and the well is in the center foreground. 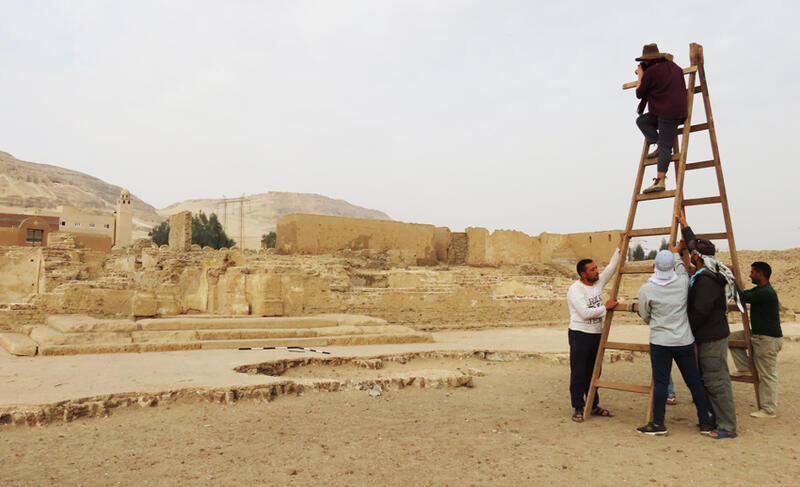 The main entrance to this multi-story rectangular building is set at the mid-point of its eastern side, approached from the open area via steps and with a rectangular tank/pit immediately in front of the doorway (fig. 9). Beyond the small entrance vestibule that includes a staircase to at least one upper story, the ground floor of the building is divided by a T-shaped arrangement of corridors leading to exterior doorways centrally placed on the west and north side. The south half of the building comprises four long narrow rooms accessed from the east-west corridor. A similar set of three rooms, the northernmost of which has a sub-floor cistern (fig. 10), opens off the shorter north-south corridor. This corridor has a second staircase and some small rooms on its south side. This large and sturdy fired brick and limestone building has been interpreted as a granary or monastic residence hall, but it is more likely that it was the diakonia, a building for administration and storage, especially of food.[12] A coin hoard found by the SCA outside the building, near its south east corner, suggests that it was built prior to the 7th century AD.[13] The mud brick enclosure wall runs north-south to the west of the large building.

Figure 9. The large building at the western margin of the western archaeological area with the mud brick enclosure wall behind after cleaning in 2019, looking west. 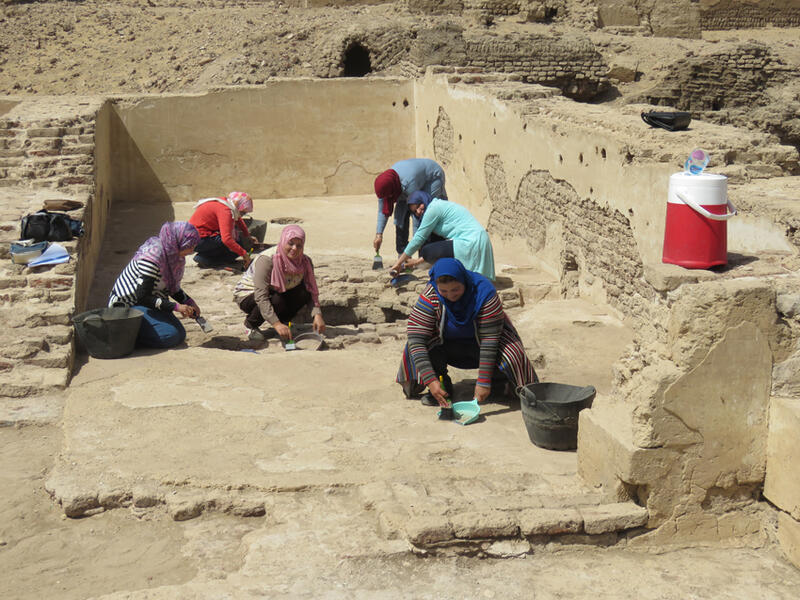 Figure 10. Egyptian archaeologists cleaning the northwestern room (and cistern) of the west building in 2019.

The whole of the northern part of the western archaeological area is occupied by features associated with water management, centered on the large well (fig. 11). The upper part of the rectangular well is built from fired brick, but its lower part is cut through the limestone bedrock. A brick-built staircase on the west side of the well gives access to its lower part, presumably at around the normal groundwater level (ca. 12.5 m below the top of the well) to facilitate inspection and maintenance. A pair of arched settings for the lifting mechanisms, comprising pot garlands powered by saqiya gear drives, forms the east and west sides of the well’s superstructure. Water was deposited into a channel and was further distributed via a system of pipes (fig. 12) to a series of cisterns throughout the western archaeological area and beyond to the north and south.[14] 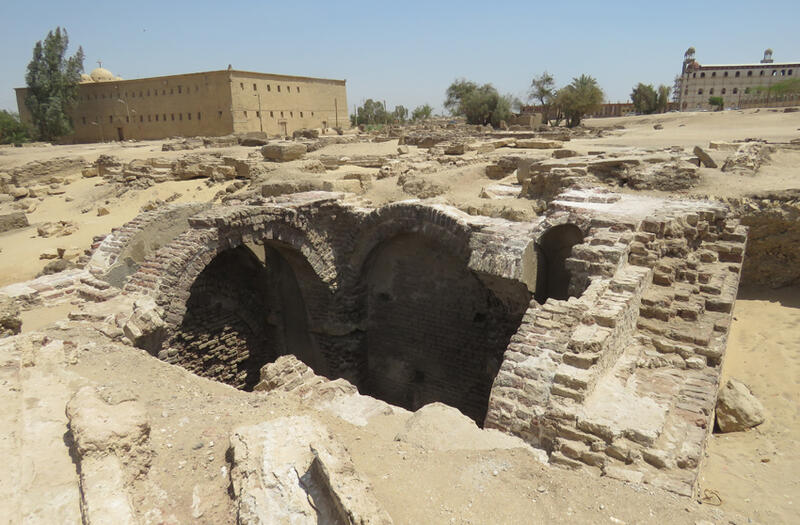 Figure 11. The well and water-distribution features in the northwestern part of the western archaeological area and the Church of St. Shenoute (top left) as they appeared in 2019, looking south east. 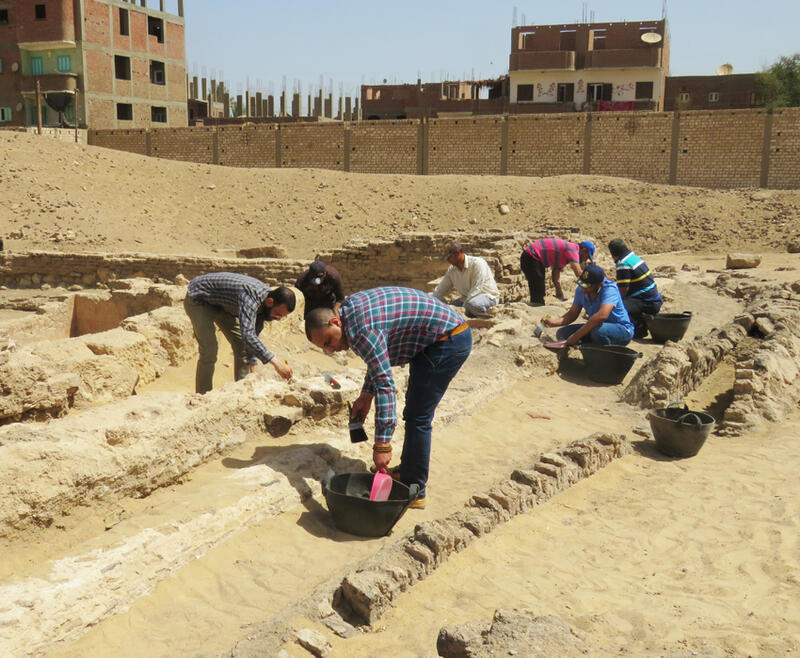 Figure 12. Water-distribution pipes in the northeastern part of the western archaeological area during cleaning by Egyptian archaeologists in 2019.