South of the Church of St. Shenoute, there are archaeological remains associated with manufacturing processes.

The first area of the White Monastery to be investigated by the Supreme Council for Antiquities (1985-1999) was located to the south of the Church of St. Shenoute. Subsequent architectural observations were made by Peter Grossmann and Darlene Brooks Hedstrom in 2002-2003.[1] The area was revisited between 2008 and 2010 by Louise Blanke, whose investigations used a combination of archaeological recording of standing architecture and keyhole excavation, with analysis of pottery and material culture by Gillian Pyke. This work provided data for Louise Blanke’s doctoral research on the archaeology of Egyptian monasticism.[2] 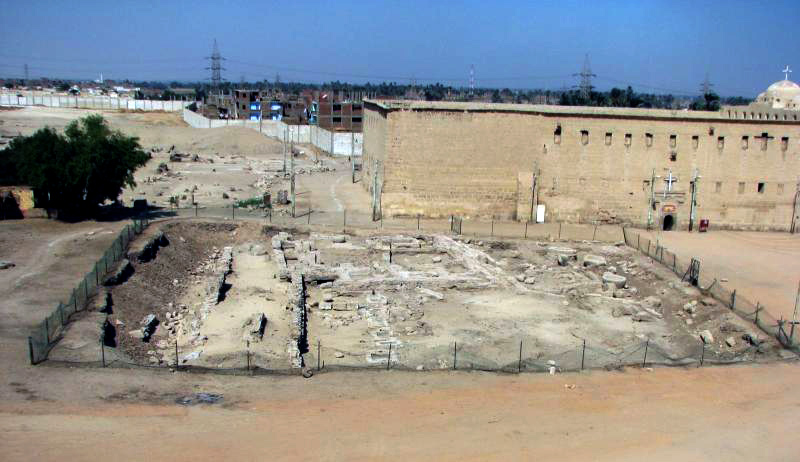 The west side of the excavated area is bounded by a north-south thoroughfare, the original surface of which is lost. The thoroughfare runs between a structure (mostly unexcavated) to the west and a walled area to the east, at the north end of which is a large building. In its original layout, the building comprised a square courtyard giving access to four rooms along its west side and four on the south side. The presence of six brick-built tanks and other installations, including a small oven, in the courtyard suggest an association with some kind of manufacturing process, while pipes and a stone-built cistern in the southern rooms relate to the movement and storage of water. Sherds within the floor-foundation of the courtyard suggest it was built in or after the 5th century CE. The courtyard was later roofed and re-floored, a staircase was inserted into one of the western rooms to give access to the roof or an upper storey, and a large tank was placed in the northeast corner of the room. Sherds in the floor-foundation of this phase suggest a date of around the seventh century, while the bedding for a pipe associated with the large tank includes ceramic material dating to approximately the 9th-10th century CE.

Pipes from within the building feed the series of six brick-built tanks, some of which were used with ceramic emplacements. Some of the tanks are linked by pipes and the series has a ceramic soakaway at the southern end. The floor is now lost, but islands of mud foundation made it possible to detect its extent across most of the southern part of the excavated area.

Additional pipes are located to the east of the large building, running north-south under a plaster-floored passageway that was later re-floored in limestone, possibly at the same time as the building’s courtyard. These pipes probably brought water from the well within the southwest corner of the Church of St Shenoute. The passageway gave access to the courtyard on the west and to a series of four rooms to the east. Beyond these rooms, in the northeast corner of the excavated area are a group of three crushing basins that appear to be a late addition to this area, one probably imported from the food-production area to the west of the Church of St Shenoute.

Deposits of rubble and refuse overlying the abandoned and collapsed buildings, now visible only at the margins of the excavated area, provide evidence for relatively recent activity in this area. Items of personal jewelry include glass bracelets probably of Ottoman date, as well as early twentieth century items.