Painting Conservation in the Church

The sanctuary of the Church of St. Shenoute bears several important medieval paintings. In addition to the image of Christ in Majesty in the east semi-dome and the Deesis in the south semi-dome there are also smaller paintings at ground level. The work conducted by YMAP within the church has included an initial test-cleaning—both of these images and of a painted wall writing (dipinto)—along with conservation and full cleaning of the Virgin and Child.

In 1972–1973, a French team discovered the image of an archangel above a doorway on the east side of the north lobe, along with the image of the Virgin with Child (Theotokos) in the same position in the south lobe of the sanctuary.[1]  Following an assessment in 2008 (fig. 1), test-cleaning of these two paintings was undertaken in 2010 by conservators Luigi de Cesaris, Alberto Sucato, and Emiliano Ricchi (fig. 2). Test squares were cleaned to investigate the nature of the painting and plaster, its condition, and the strategy and treatments required for full conservation. 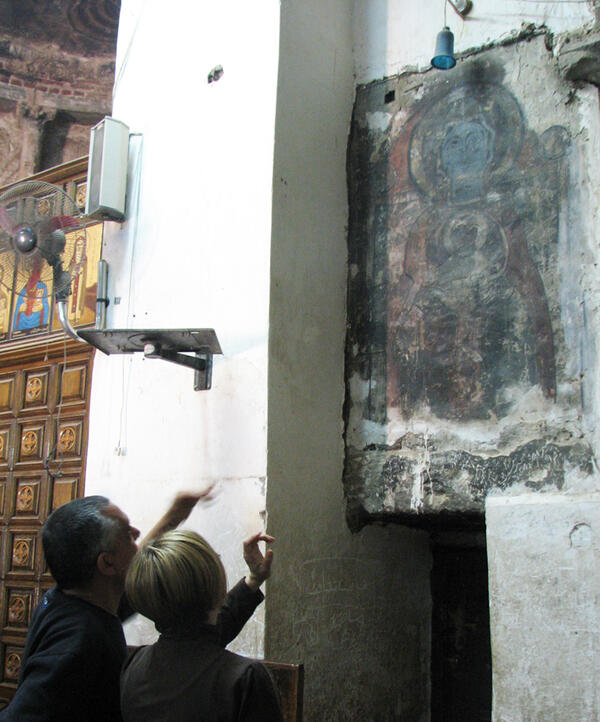 Figure 1. Luigi de Cesaris and Elizabeth Bolman assess the painting of the Virgin and Child in the sanctuary of the Church of St. Shenoute in 2008. 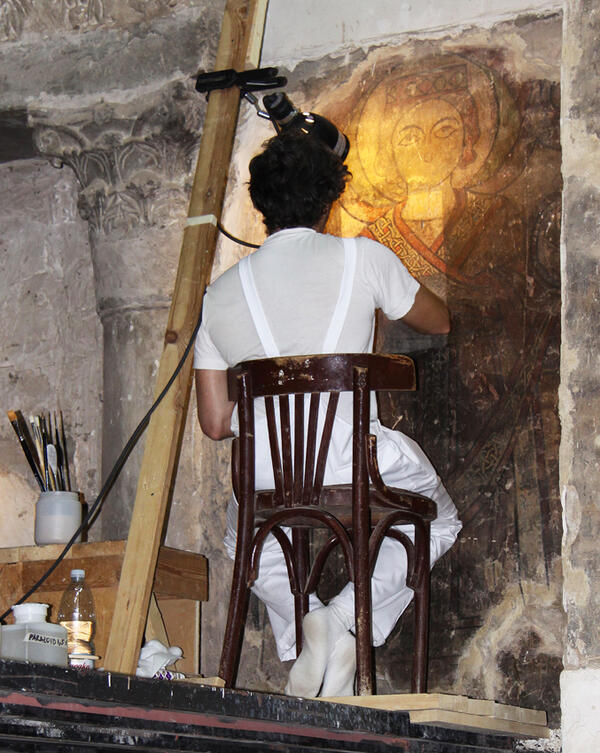 Figure 2. Alberto Sucato during test cleaning the painting of the archangel in the sanctuary of the Church of St. Shenoute in 2010.

In 2015, during the erection of scaffolding for architectural investigation of the upper part of the south conch, the YMAP team noticed that a section of the upper part of the plaster support for the image of the Virgin and Child was detaching from the wall and was in danger of falling (fig. 3). Emergency conservation was immediately undertaken by Alberto Sucato and Emiliano Ricchi, whose 2010 tests allowed them to proceed with a full cleaning of the painting. They were also able to conduct a survey of the materials and techniques used in the original execution of the image. 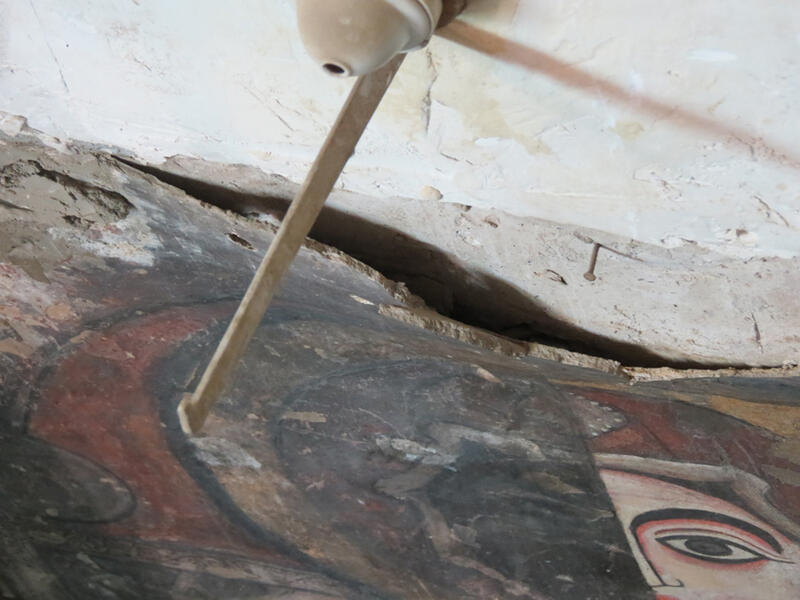 Figure 3. Plaster detachment at the upper extent of the image of the Virgin and Child as it appeared before conservation in 2015.

Prior to the intervention, the state of the painted surface and plaster was comprehensively investigated and documented through digital photography. The painted surface was checked for peeling paint layers and detached plaster, and dust was removed using soft brushes. Earlier fillings were removed and replaced. The surface of the detached plaster was secured with Japanese paper and Paraloid B72 in acetone (fig. 4). Two stages of adhesion were employed. The first involved the application of Primal (acrylic resin emulsion) mixed with calcium carbonate in a few spots to act as anchoring points for the plaster.  The second involved the local injection of a hydraulic mortar in liquid form (PLM). The plaster was stabilized and the detached portion carefully repositioned and reattached. 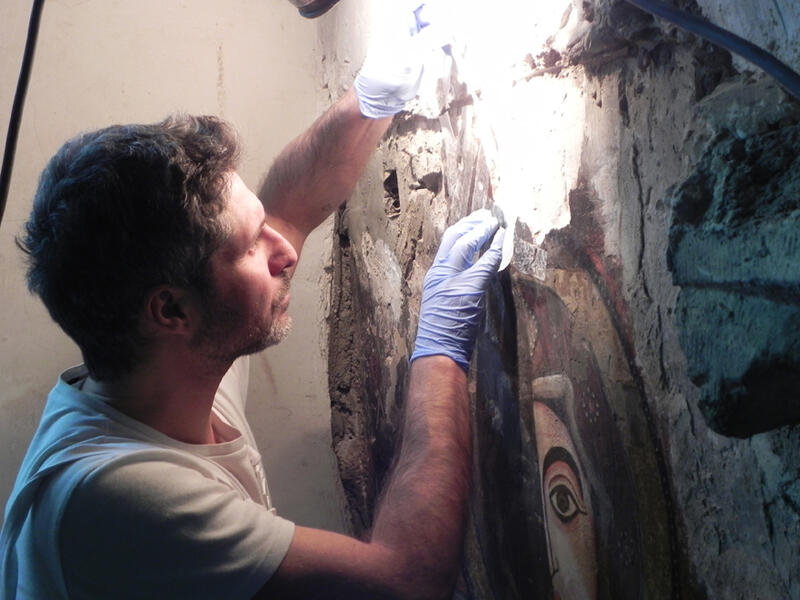 Figure 4. Alberto Sucato securing the plaster surface with Japanese paper during conservation in 2015.

Raised areas of paint were stuck down using injections of 15% acrylic resin in an emulsion, sometimes with gentle pressure with a spatula separated from the surface by a polythene sheet. Before cleaning, delicate decoration was secured with a 15% solution of acrylic resin applied with a small brush, which was later removed. Areas of poor paint adhesion were consolidated with a low percentage solution of acrylic resin in an organic solvent, applied by brush or atomizer. The paint surface was cleaned with a mixture of alcohol, acetone, a small quantity of ammonia and water with a surfactant additive, which was gently rolled across the surface on cotton buds (fig. 5). The removed materials included sooty residues from oil lamps and candles, insect colonies, bird droppings, and areas of later repainting and other interventions. 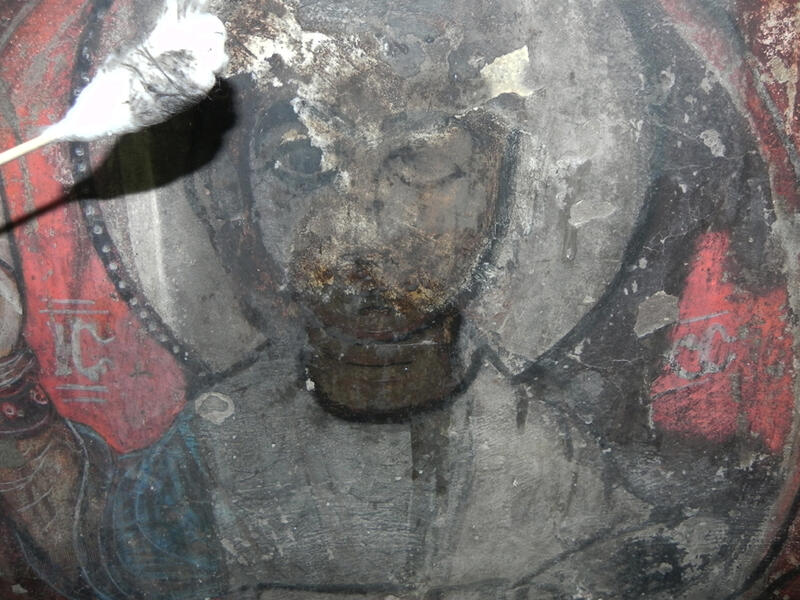 Figure 5. Removal of dirt from the face of the Christ Child during conservation in 2015.

Areas of plaster loss were filled with lime-based soft mortar, and finished using the acqua sporca (“dirty water”) technique (fig. 6). Where the original appearance of the image was known, reversible watercolours were applied. On the faces, narrow, evenly-spaced, parallel vertical lines of colour were applied to reconstruct the painted surface, using a technique known as tratteggio (fig. 7). According to this method, reconstructed sections marked by vertical striations can be easily distinguished from the original painting technique, which was applied in solid color. 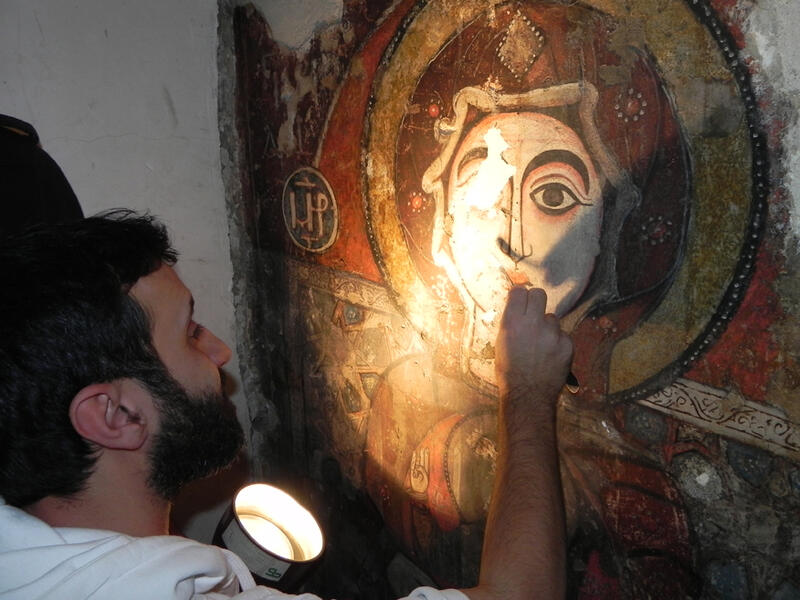 Figure 6. Emiliano Ricchi using soft lime-based mortar in an area of plaster loss during conservation in 2015. 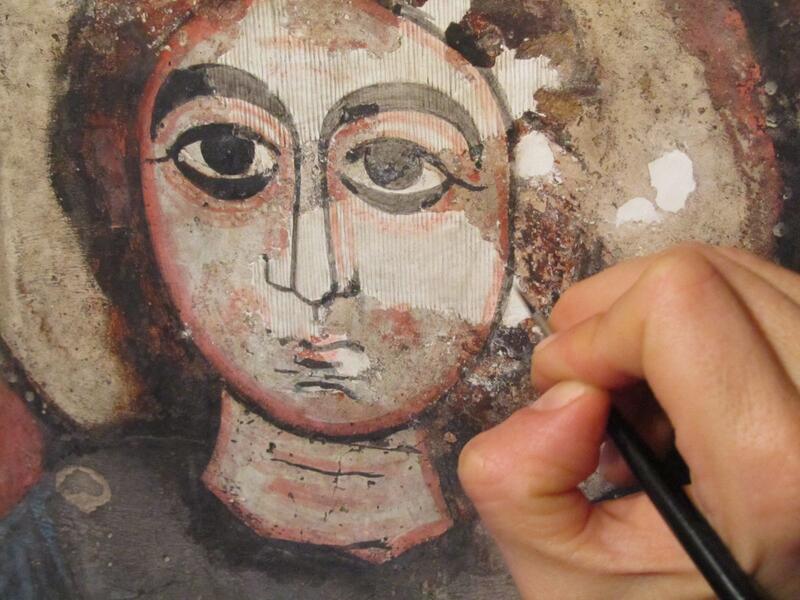 Figure 7. Face of the Christ Child, showing details of the tratteggio technique, during conservation in 2015.

The full cleaning and conservation of the image of the Virgin and Child (fig. 8) allowed Elizabeth Bolman to make a number of important observations. Most of the painting was by a skilled artist but the simple patterns on the cushions were executed by a less accomplished painter. The star design on the throne is a motif that was widely used by both Christian and Muslim artists from the early 14th century. The richness of the materials used in the image suggests that it was painted in the earlier part of the century, perhaps between 1300 and 1335, because the Coptic community suffered drastic economic and political decline in its later part.[2]

The archangel is of earlier date. A dedication inscription states that it was commissioned by Apa Phoibammon, a master builder who was probably the architect of the rebuilding that took place within the church in 1259. The style of the painting is consistent with other images of this date from around Egypt.[3] 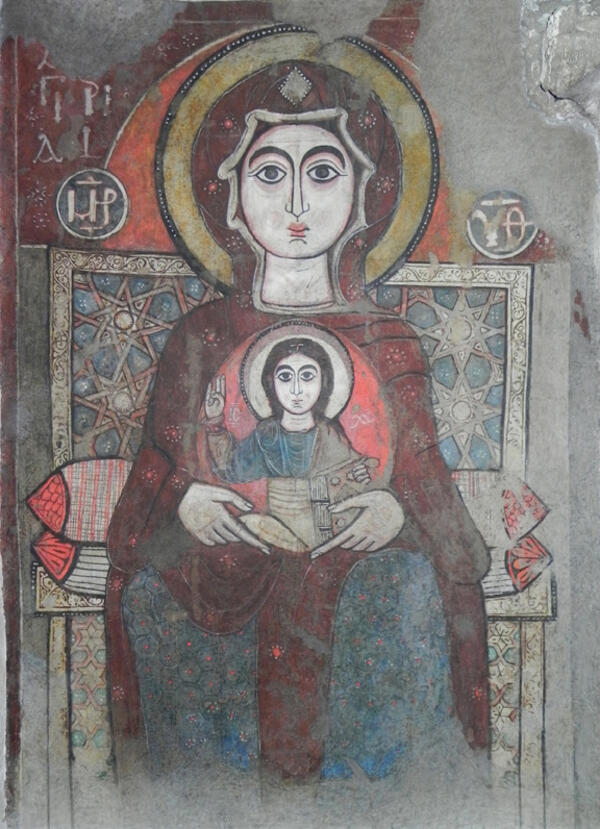 Figure 8. Fully-cleaned image of the Virgin Mary and Christ Child following conservation in 2015.

YMAP’s work on the paintings in the lower part of the sanctuary continued in 2020, with test cleaning of a monastic figure and a long, red-painted text on the west and east sides of the north lobe by Bianca Madden. In her assessment, Madden observed that the image and text were covered in dirt, dust, soot, bird feces, and possibly also bat feces. She used a DStretch App on her phone to manipulate the color balance of photographs to guide her confirmation and selection of test areas that retained paint (fig. 9).[4] 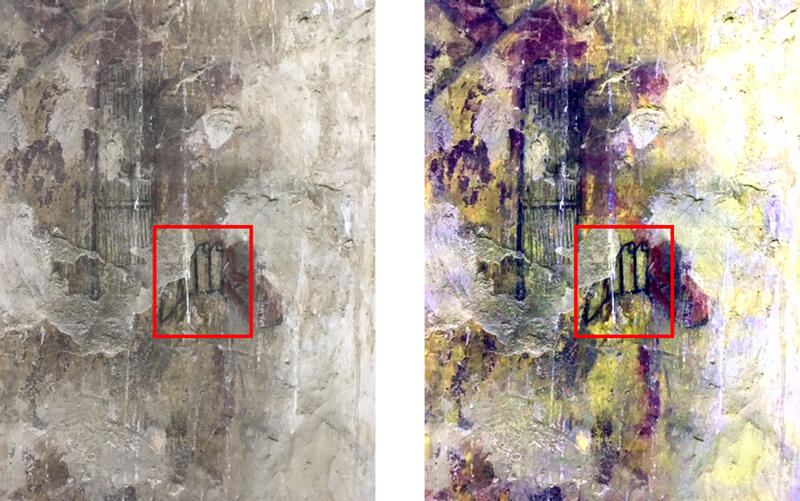 Figure 9. Photograph of a detail of the hand of the monastic saint before (left) and after (right) the use of D-Stretch prior to test cleaning in 2020.

Madden’s testing of cleaning chemicals and techniques showed that the image of the saint was quite easy to clean with tri ammonium citrate 2.5% or ammonium carbonate 2.5% applied on a cotton swab and cleared with water. The dirt on the text was more ingrained, with a higher soot content. Here, cleaning was most effective with tri ammonium citrate 5% applied in gel form and left for 5 minutes before clearing with water on a cotton swab (fig. 10). Two gel forms were used: carboxy methylcellulose and a PVA-based cross-linked hydrogel. The use of gels allowed a longer contact time with the surface and reduced of the amount of swabbing required, as well as the associated risks of abrasion or a resultant increase in the solubility of the plaster.[5] 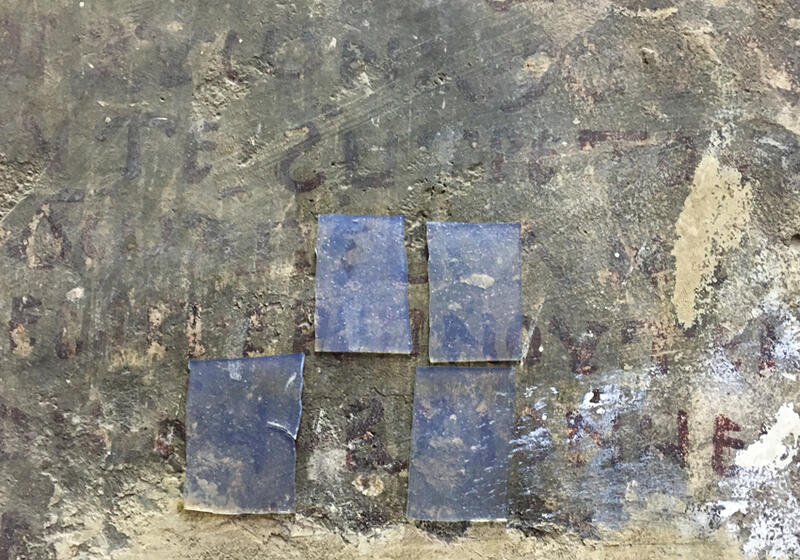 Figure 10. Testing the efficacy of chemicals and gels on the text during test cleaning in 2020.

A further area of investigation in 2020 was the north semi-dome, where no painting has ever been reported and which today is coated with plaster. After a visual assessment of the surface under raking and UV lights and under magnification, Madden removed six small ‘windows’ of plaster in areas most likely to coincide with painting, which she later refilled with lime-based plaster with a colour-matched coating (fig. 11). Working layer by layer, she determined that the composition of the uppermost layer of white plaster and underlying grey cement is consistent with recent interventions. These layers were generally applied directly onto the blackened brickwork. It was only immediately adjacent to the carved shell at the apex of the semi-dome that she found evidence of an ancient coating, which was blackened and disintegrating. This confirms that there is no medieval plaster remaining on the north semi-dome. It is likely that it fell quite some time before the recent replastering, which probably took place under the Comité in the early 20th century. 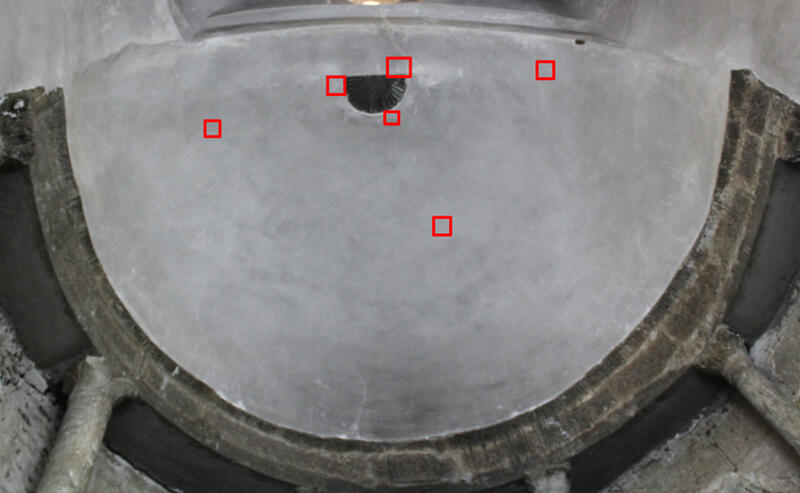 Figure 11. North semi-dome of the sanctuary. The positions of the test ‘windows’  identified as part of the 2020 investigation of the plaster layers are indicated with red squares.

[5] For more on the use of these gels, see https://www.tate.org.uk/about-us/projects/nanorestart/infinite-possibilities; http://www.nanorestart.eu/index.php?option=com_content&view=article&id=427&Itemid=829; and https://cordis.europa.eu/project/id/646063.