Northwest of the Church of St. Shenoute are the remains of a small funerary chapel featuring a subterranean tomb with a painting of St. Shenoute flanked by two angels holding wreaths or crowns.

Located in the northwestern part of the monastery, the funerary chapel (fig. 1) was partially excavated by the Supreme Council for Antiquities (SCA) between 2002 and 2004 under the direction of Mohamed Abd al-Rassul and Saad Mohammed.[1] 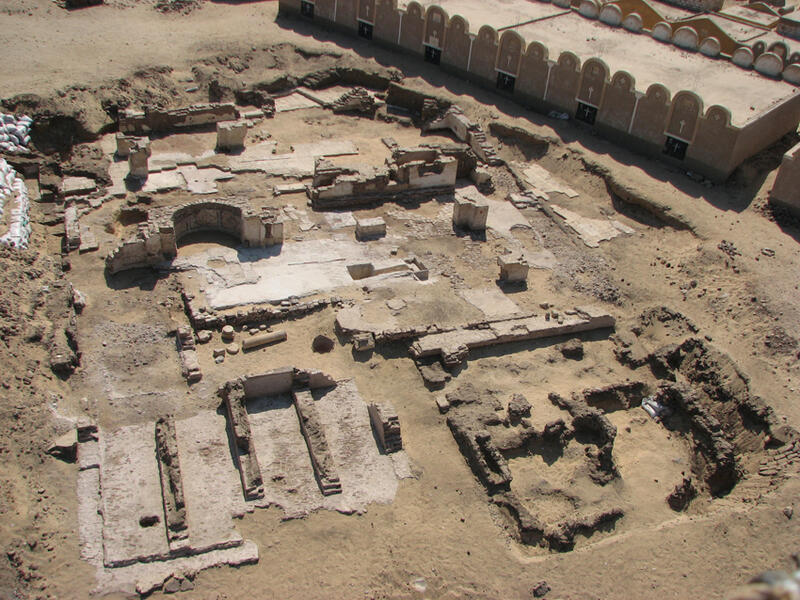 Figure 1. Aerial view of the Funerary Chapel as it appeared in 2008, looking south west.

A program of cleaning and recording of the above-ground elements of the Funerary Chapel was begun by Darlene Brooks Hedstrom and Peter Sheehan in the winter of 2006–2007 and was continued and expanded to include excavation by YMAP-South in 2008–2009 (fig. 2).[2] Above-ground conservation and protective measures, as well as cleaning and conservation of the tomb itself, took place under the direction of Elizabeth Bolman from 2007 to 2012 (fig. 3).[3] This included closing the tomb access with a door, which protected it from sand and debris and allowed the SCA to control access and monitor its condition. These protective measures were updated by Nicholas Warner in 2019, and the Funerary Chapel was reburied. 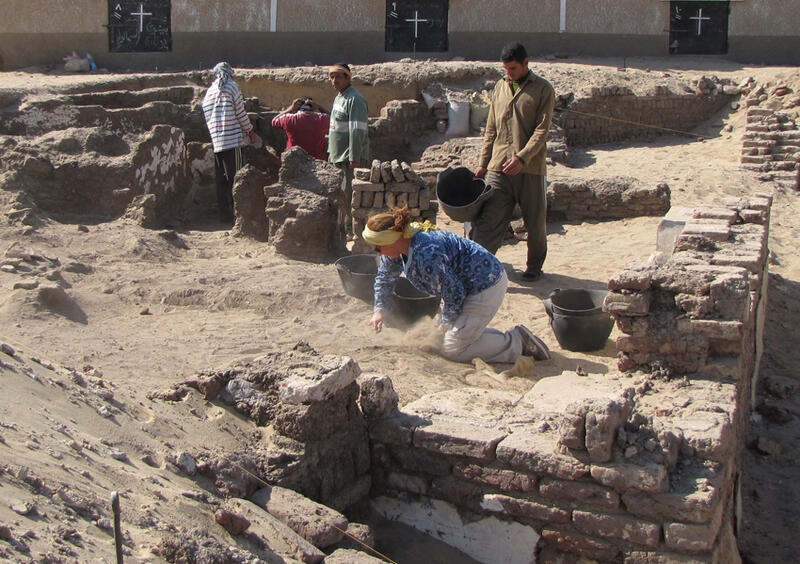 Figure 2. Wendy Dolling excavating to the south of the hall in 2009. 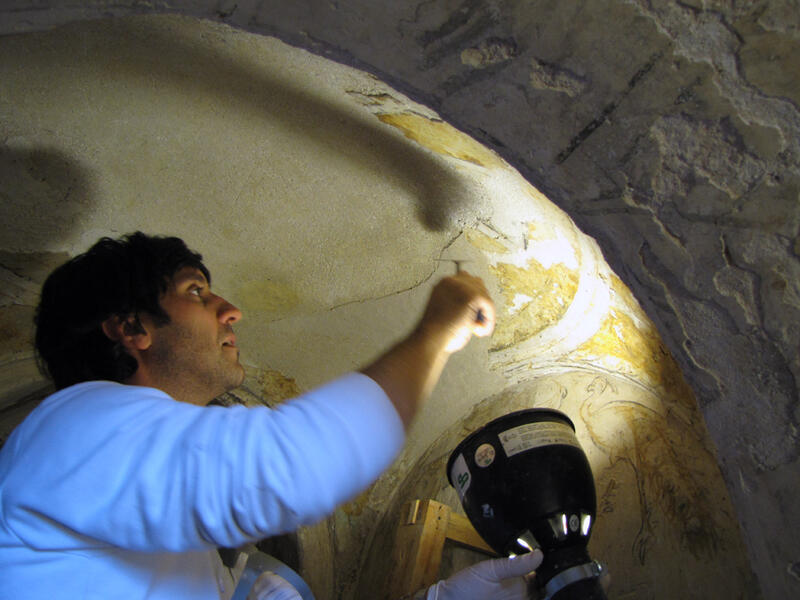 Figure 3. Emiliano Ricchi repairing plaster in the tomb in 2009.

Fallen painted plaster retrieved during the SCA excavations was recorded by Gillian Pyke and Rick Colman in 2007, with ongoing work by Gillian Pyke as further fragments were found in the YMAP-South excavations by Louise Blanke and Wendy Dolling, who were assisted by Mohammed Khalifa (fig. 4).[4] Petrographic analysis of plasters was conducted by Mary Ownby in 2012. Pottery and objects were studied by Gillian Pyke between 2008 and 2015, with object illustration by Pieter Collet in 2015. Architectural drawings, including isometric reconstructions, were prepared by Nicholas Warner from 2007 to 2011.[5] The Funerary Chapel was included in the 3D scanning survey conducted by Pietro Gasparri and his team in 2019.  Preparatory cleaning for this work, as well as a program of photo-documentation to record the building’s appearance in 2019, was completed by Gillian Pyke and Sharif Munir Adly. 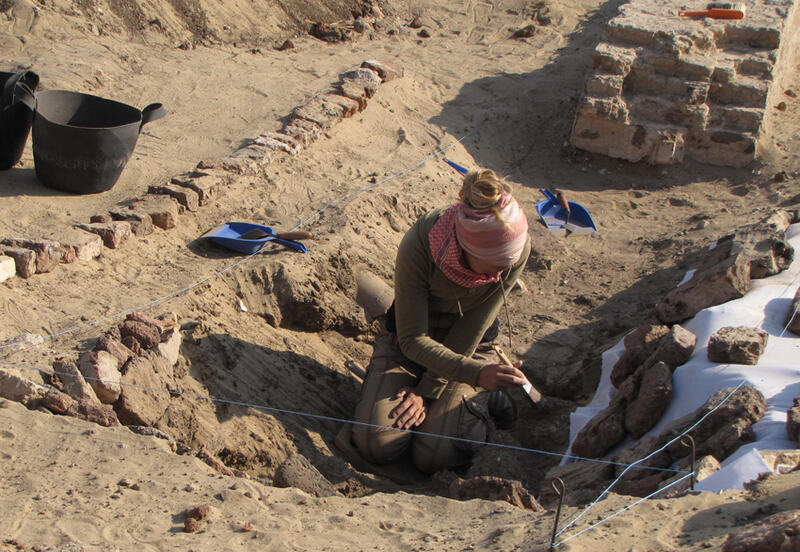 Figure 4. Louise Blanke investigating the south wall of the chapel in 2009.

The Funerary Chapel comprises several elements, both above and below ground (figs. 5–6). Those that are above-ground are the chapel (north) and the hall (south), which are separated by a staircase (west) and wall (east). Both have an east-west orientation and are of fired brick construction with plastered walls. The below-ground element is the tomb, positioned in the eastern part of the chapel and constructed with the same materials as the rest of the funerary chapel. Associated buildings outside the Funerary Chapel consist of a series of narrow rectangular fired brick rooms built against the north wall of the chapel at its east end and a square mud brick building, now very poorly preserved, abutting the west end.[6] 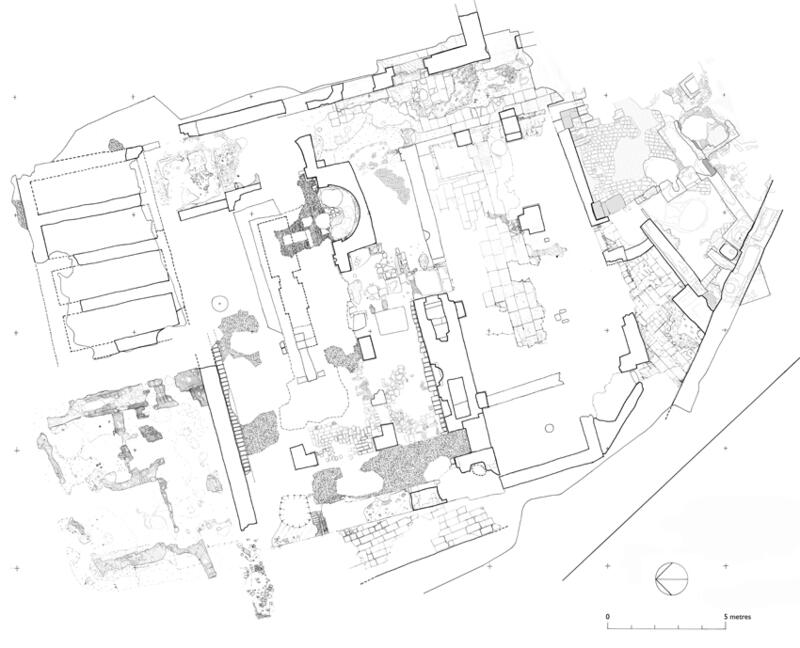 Figure 5. Floor plan of the Funerary Chapel and adjacent structures by Nicholas Warner. 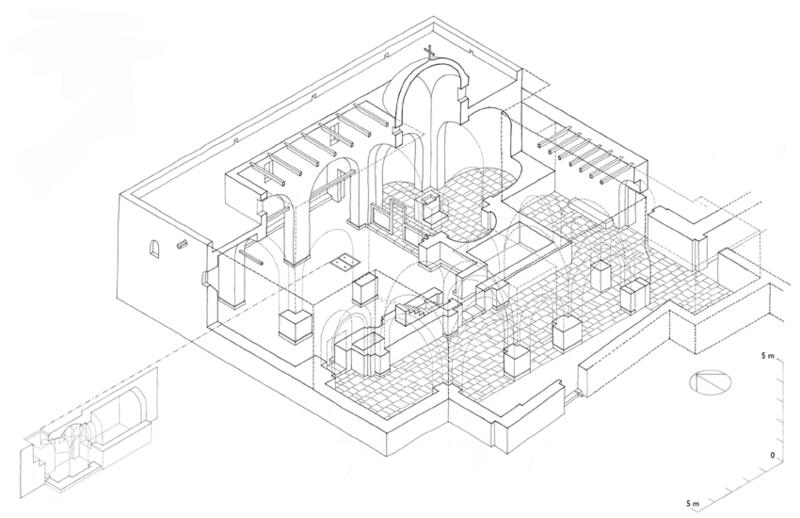 Figure 6. Isometric reconstruction of the Funerary Chapel by Nicholas Warner.

The chapel has a three-aisled nave and a three-lobed sanctuary similar to that of the Church of St. Shenoute, but at a much smaller scale. Only the south lobe and part of the east lobe of the sanctuary, the piers forming the aisles of the nave, and the staircase remain standing. Scant traces show that the floor of the nave originally included marble slabs, some of which were reused tombstones. This was later replaced with a plaster floor, probably at the same time as the addition of a low step or seat around the perimeter. Elements of the in situ painted visual program belong to its lower register. Those in the sanctuary consist of a curtain representing the Veil of Heaven in the east lobe with a geometric motif on its archway and geometric panels on the south lobe with a floral motif on its archway (fig. 7). Traces of further geometric panels are visible on the piers of the nave.[7] 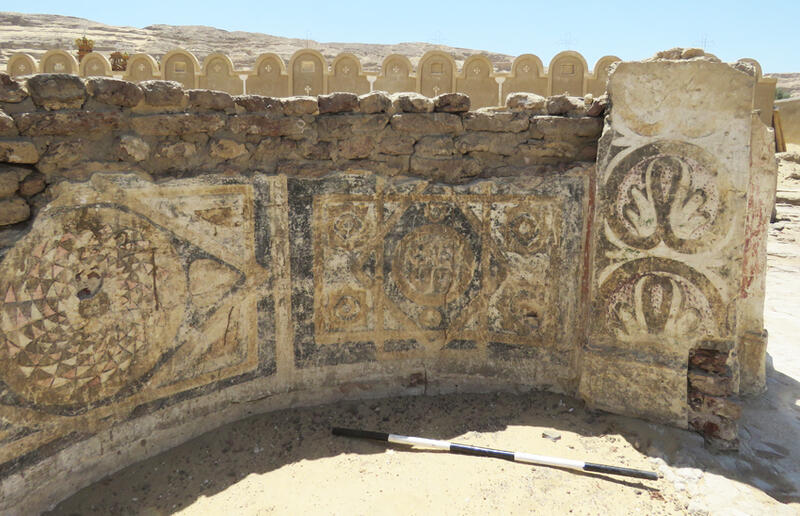 Figure 7. South lobe of the chapel, with geometric panels on the wall and floral pattern on the arch, as it appeared in 2019.

Doorways on either side of the stair-block allowed communication between the main chapel and the similar-sized hall to the south. The eastern of these two doorways is directly opposite the southern entrance to the hall. The hall is poorly preserved in its western part, but three of its eastern piers remain, two of which bear traces of painted panels and geometric motifs similar to those in the chapel.  Two successive floors are also visible in the eastern part of the hall, comprising limestone pavers bedded on sand over a plaster floor. Excavations by Wendy Dolling in 2008 showed that the mud brick eastern perimeter wall of the Funerary Chapel was common to both the chapel and the south hall. This wall was also shared with a space to the east, now under a substantial spoil heap, which communicated with the hall via a doorway towards its southern end (fig. 8).[8] 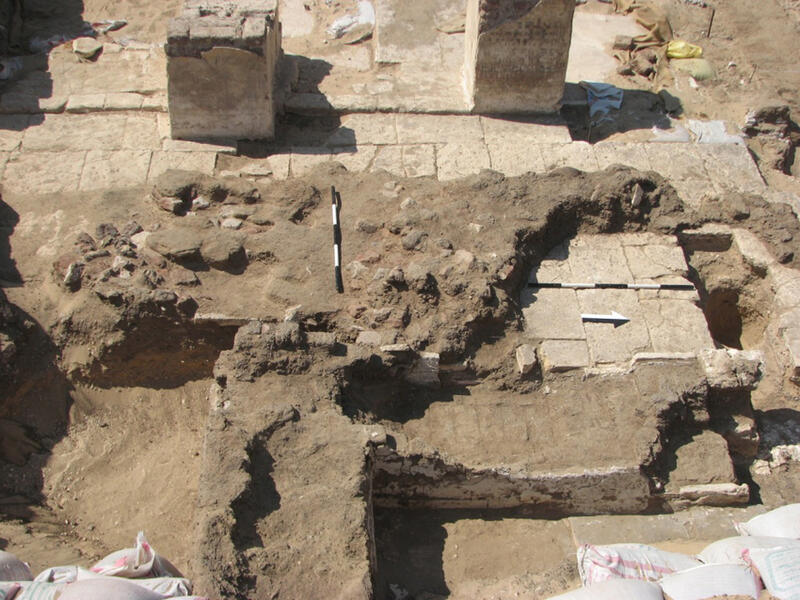 Figure 8. East end of the hall during excavation in 2008, with paving covered by collapse (center) and the corner of a building/space to the east (bottom), looking west.

Building collapse within the easternmost part of the hall included fragments of painted plaster, some of which could be joined together, giving some insights into the visual program. This included at least one panel of a repeating floral-geometric motif, as well as a scene of monastics holding books (fig. 9). The presence of many other fallen fragments from the SCA and YMAP-South excavations attests to an extensive and vibrant painted program. It included geometric, floral, and figural elements, some of which can be paralleled in the sanctuary of the nearby Red Monastery church. Differences between the plaster support, paint composition, and painting style of these fragments and some of the in situ motifs indicate that two successive programs are present, the second retaining some elements of the first. Stylistic details, particularly in the figural painting on the fragments, point to a date of the sixth to seventh century for the second program.[9] 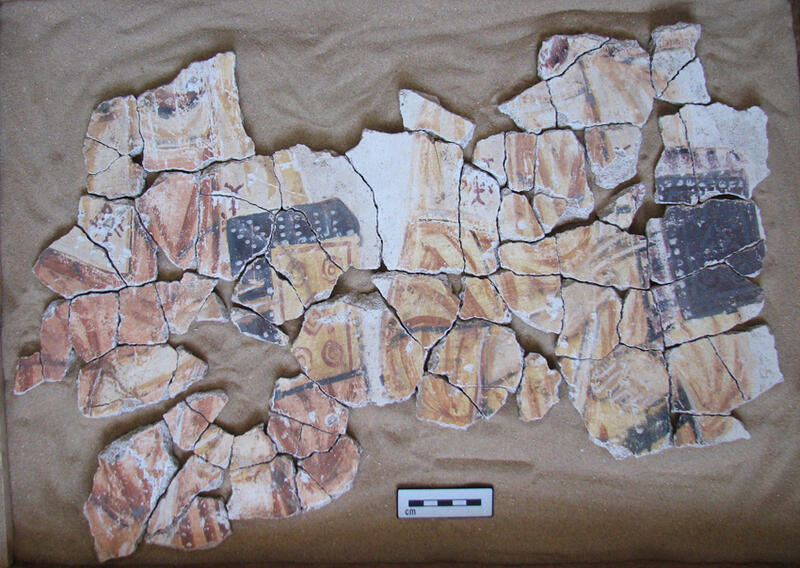 Figure 9. Part of a scene of two male monastics, preserved from neck to waist, holding books. These plaster fragments were found in collapse at the eastern end of the hall in 2008.

The tomb is located below the floor of the nave, oriented along its long axis. It was built at the same time as the chapel and is positioned so that the eastern end of the burial chamber is almost directly below the chapel’s altar (fig. 10). It consists of a square antechamber with a shallow domed ceiling and barrel-vaulted burial chamber, built in fired brick and lime mortar, coated in lime plaster and with a mainly limestone floor.[10] 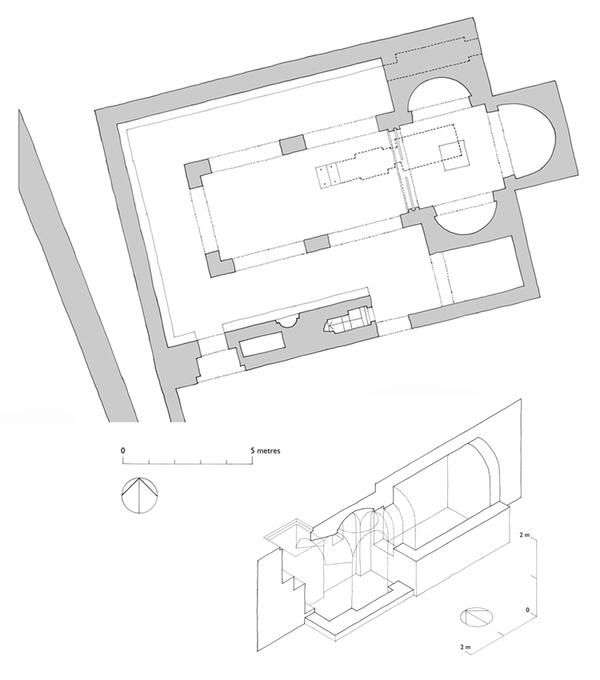 The exquisite visual program was revealed by the 2007–2012 cleaning and conservation by Luigi de Cesaris, Emiliano Ricchi, Alberto Sucato, and team. The lower frieze throughout the tomb comprises panels imitating marble. The lambs, deer, gazelles, peacocks, and eagles on the upper walls of the vestibule are associated with salvation and rebirth. More animals and birds appear in the burial chamber, but here the program is dominated by three jeweled crosses (fig. 11), and by an image of St. Shenoute flanked by angels who bestow on him a wreath or crown (fig. 12). A dipinto (painted wall writing) immediately above St. Shenoute suggests that the underground space was designed as his tomb, which agrees with architectural and art historical data in placing its construction and decoration in the mid-fifth century CE.[11] 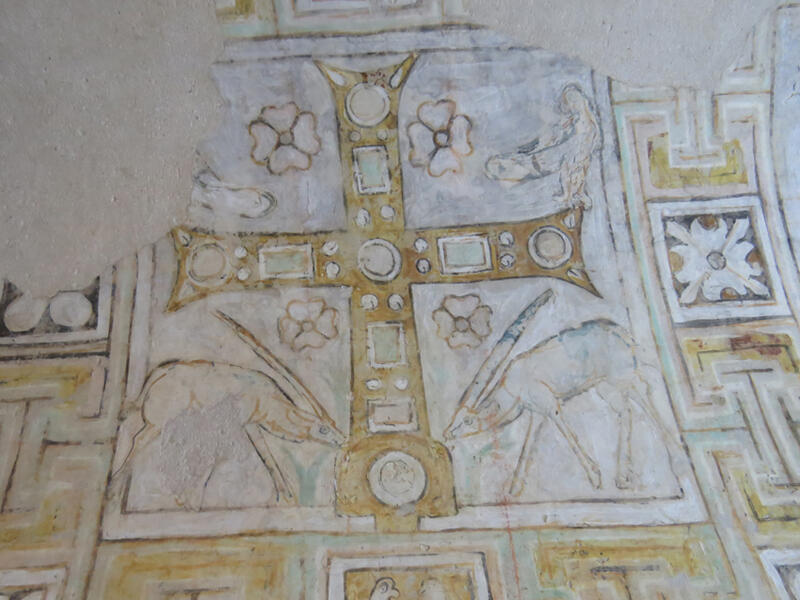 Figure 11. One of the jeweled crosses in the burial chamber of the tomb, as it appeared in 2019. 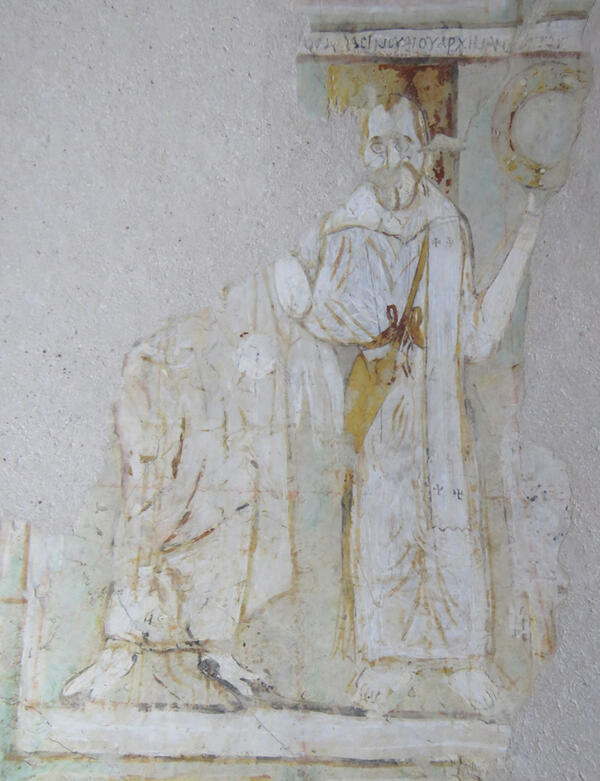 Figure 12. Image of St. Shenoute in the burial chamber of the tomb, as it appeared in 2019.

Outside the Funerary Chapel, the aforementioned series of at least four narrow rectangular rooms ranged against the east end of the chapel’s north wall are likely to be proximate tombs (fig. 13).[12] The construction materials and methods employed here are similar to those used within the Funerary Chapel, but none of the original plaster remains, so it is not possible to determine whether these too were richly painted. 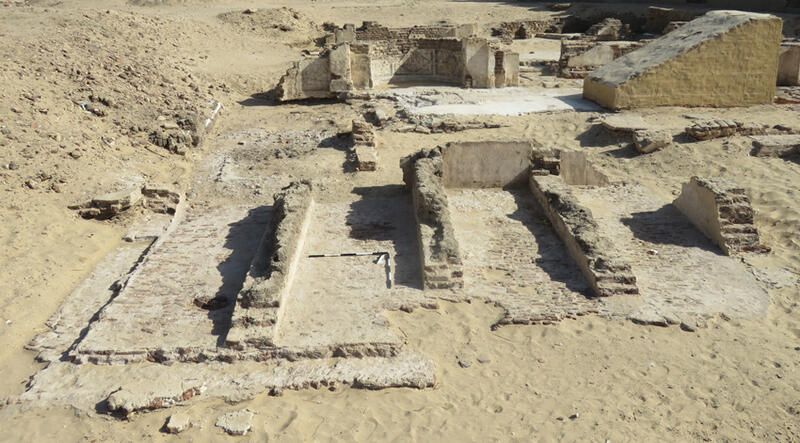 Figure 13. Structures built against the north wall of the chapel in its eastern part as they appeared in 2019, looking south. The yellow-painted feature (top right) is the tomb access installed in 2009 and replaced in 2019.

The reasons for the abandonment of the funerary chapel as a place of worship are now unclear, but a combination of archaeological observations, key-hole excavations by Louise Blanke, and wide-scale excavations by Wendy Dolling in 2008–2009 provides evidence for activities after its primary use ended (fig. 14). These activities seem to have been domestic in nature. They include patching of the floor of the nave, insertion and later careful extraction of storage jars into the floor in the sanctuary and nave, and the building and subsequent removal of an oven in the easternmost part of the hall. Gillian Pyke’s analysis of associated mud brick structures to the south of the hall, built in an entirely different alignment, shows that they were in use during the early medieval period.[13] 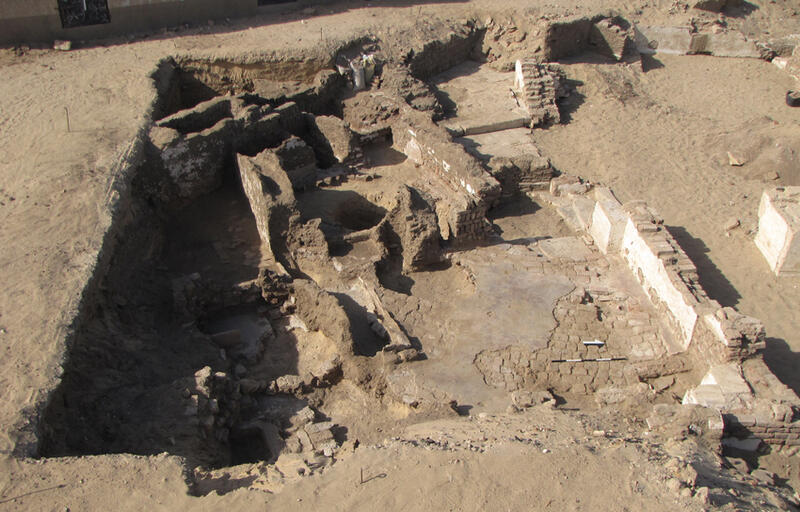 Figure 14. Mud brick features in the area to the south of the hall as they appeared in 2009, looking west.

This broadly fits with the dating of papyri discovered in the hall by Peter Sheehan during his 2006–2007 archaeological recording and later studied by Alain Delattre. One group of fragments belongs to a papyrus roll with a mud seal, perhaps recording a private sale contract. It contains a precise date of 306 AH (equivalent to 918–919 CE) within the text. The other group belongs to a second papyrus roll, this one double sided. The texts on either side were written by different individuals whose relationship is not known. One records an inventory of goods, perhaps belonging to a church. Idiosyncrasies of the writing suggest that a date of the ninth to early-tenth century is likely. [14]

The latest use of the Funerary Chapel seems to have involved the stabling of animals, after which the building was abandoned and filled, over time, with wind-blown sand. Evidence from the excavations to the south of the hall suggests that the whole area was subsequently explored through occasional pitting activities.[15] This has resulted in the poor state of preservation of the southern mud brick structures. It is likely that this pitting is responsible for the poor state of the building set against the west end of the chapel’s north wall, recorded by Anna Stevens in 2008 (fig. 15).[16] Its mud brick construction is more similar to that of the structures to the south of the hall than to the Funerary Chapel, pointing to a medieval or perhaps even later date. 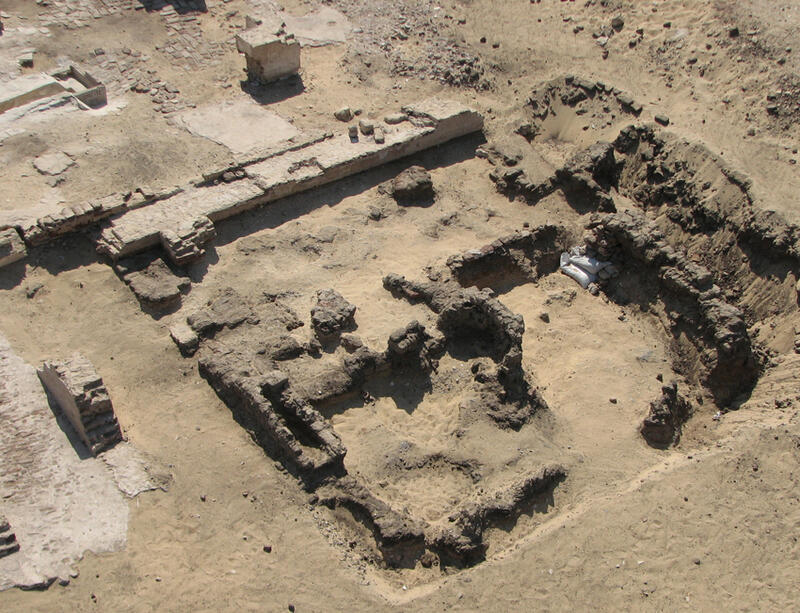 Figure 15. Mud brick building against the north wall of the chapel as it appeared in 2008.