In 2015, Yale was able to complete two significant conservation projects and initiate a third in the Church of St. Shenoute.

Conservation was carried out at the west end of the church building, and a painting of the enthroned Virgin and Infant Christ in the sanctuary was cleaned and stabilized. In addition, the team tested the use of 3D scanning as a technique for conservation and documentation. A test scan of the north exterior wall of the church will serve as a basis for more comprehensive future campaign.

Two sections of wall were selected for conservation because they were considered to be at risk from structural failure in the short-to-medium term. This work was completed by Nicholas Warner and Mahmud al-Taiyyib in spring 2015.

The first section was part of the original fifth century wall separating the west end of the nave from the narthex at a high level, where a loss of the entire skin and core left the surviving portion (approximately 25 m2) in a perilous condition. The lower part of the inner (west) face of the upper part of the wall was reconstructed and plastered using fired bricks and lime mortar. A wooden spreader plate was installed at the top of this brickwork in order to disperse the weight of the upper section of the rebuilt wall evenly. Eleven courses of limestone facing blocks were installed above, using lime-based mortars for bedding and pointing to replicate the original mortars. Stainless-steel threaded rods fixed with epoxy acted as through-ties between the new and old masonry courses. Recent plaster pointing and fills were removed from the upper part of the outer (east) face of the wall and replaced, and the remains of reinforced concrete from a recent house were also removed. 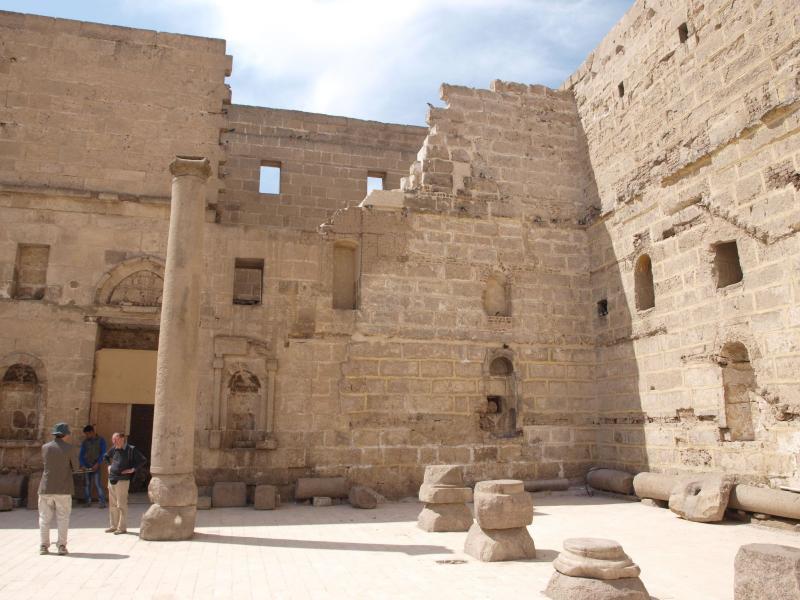 The second section of wall was an area of approximately 150 m2 that extended the entire height the south internal elevation of the church between the ruined apse and domed chamber and above the dome as far as the southwest corner of the church. This is probably a nineteenth-century rebuild carried out during the time of Muhamad ‘Ali, which used small blocks in irregular courses, making no attempt to match the features or style of the original building. Prior to intervention, gaps were beginning to appear in the structure due to rising damp that affected the weak mud mortars, as well as the robbing-out of building materials. Following the documentation of the wall, missing brick courses were replaced with matching bricks and lost sections were filled with stone chips or rubble to match the existing construction. Finally, the entire interior elevation was re-pointed with a lime-based mortar to its full height. For further details regarding building conservation at the White Monastery, see Stephen J. Davis, Gillian Pyke, and Nicholas Warner, “Architectural Conservation at the White Monastery Church (Dayr Anba Shinuda), Sohag” Bulletin of the American Research Center in Egypt 208 (Summer 2016), 34–41.

During the spring 2015 season at the White Monastery it was noted that a small section of the upper part of the thirteenth-century image of the Virgin Mary and Christ Child at the east end of the south conch in the sanctuary of the Church of St. Shenoute was detaching and in danger of falling from the wall. Fortunately, conservators Alberto Sucato and Emiliano Ricchi were available at short notice to come to site and conserve the plaster. At the same time, they were also able to clean the painting, having already conducted a test cleaning of two small areas in 2010. 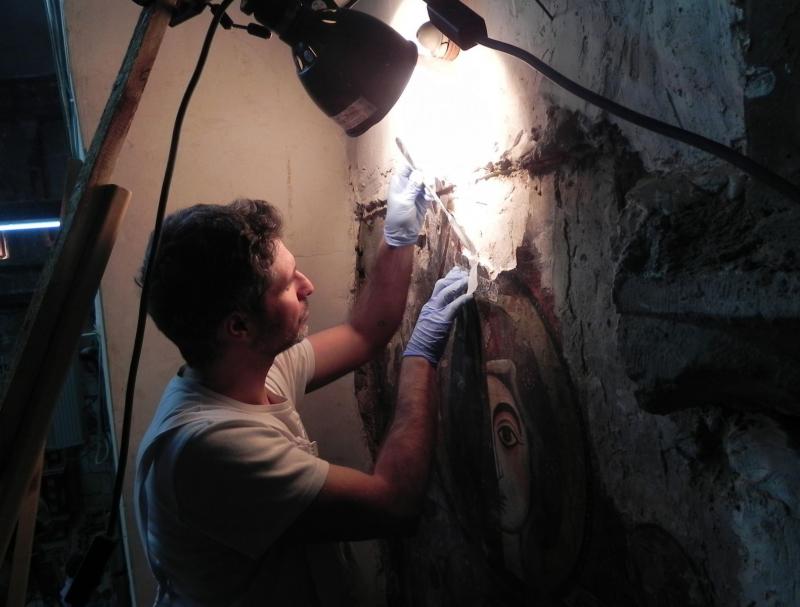 Prior to the intervention, the state of the painted surface and plaster was comprehensively investigated and documented through digital photography. The painted surface was checked for peeling paint layers and detached plaster, and dust was removed using soft brushes. Earlier fillings were removed and replaced. The surface of the detached plaster was secured with Japanese paper and Paraloid B72 in acetone. Two stages of adhesion were employed. The first involved the application of Primal (acrylic resin emulsion) mixed with calcium carbonate in a few spots to act as anchoring points for the plaster.  The second involved the local injection of a hydraulic mortar in liquid form (PLM). The plaster was stabilized and the detached portion carefully repositioned and reattached. Areas of plaster loss were filled with lime-based soft mortar, and finished using the “dirty water” technique, Where the original appearance of the image was known, reversible watercolours were applied in narrow, evenly-spaced parallel vertical lines of colour to reconstruct the painted surface, using a method known as tratteggio. According to this method, reconstructed sections marked by vertical striations can be easily distinguished from the original painting technique, which was applied in solid color. For further details regarding the paintings conserved at the White Monastery, see Elizabeth S. Bolman, “A Medieval Flourishing at the White Monastery Federation: Material Culture,” in The Red Monastery Church: Beauty and Asceticism in Upper Egypt, ed. E. S. Bolman (New Haven and London: Yale University Press / American Research Center in Egypt, 2016), 203–215, esp. 211ff. and figures 16.14 and 16.15. 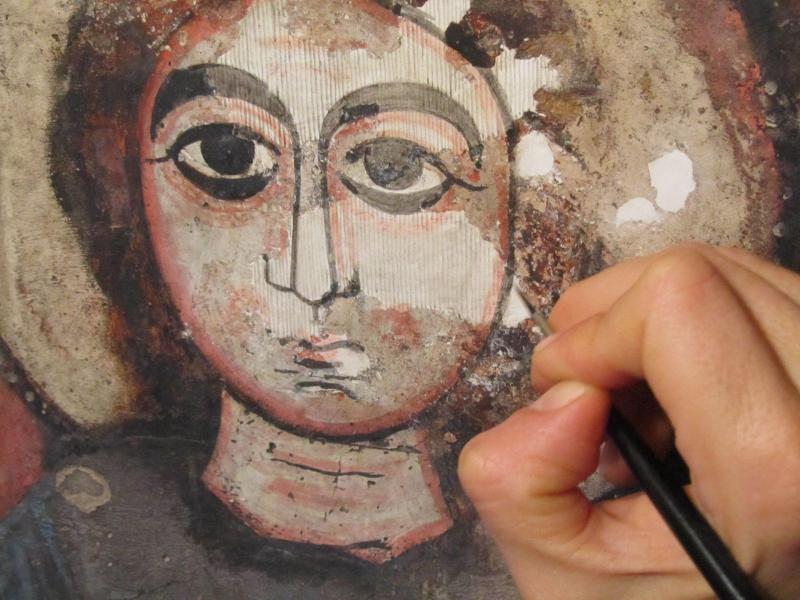 For the spring 2015 season, the north exterior wall of the Church of St. Shenoute was selected for testing the use of 3D scanning for recording and documenting its structure. The method used by Pietro Gasparri and Giovanni Tamburro is one of the most advanced now available, based on an integrated technology that involves photogrammetry, laser scanning, and topographic systems. The three-step method consisted of: (1) scanning all the surfaces of the north wall (with the exception of the interior of the sanctuary area); (2) a topographic survey of the control points so that the individual scans could be combined into a 3D model; and (3) a photographic survey for the ortho-photographic reproduction of wall surfaces.

The result of this work was a snapshot view of the north wall in its current condition as of March 2015. The scan recorded the position of architectural features and documented visible modifications, damage, and deformation to the wall, which has a pronounced inward bow. 3D scanning technology has advantages over traditional photographic and survey methods in speed, efficiency, and accuracy, while still producing images in the same photographic and line-drawing formats for publication. The ability to manipulate the 3D image digitally on a computer allows the investigator to view it from various angles, to measure distances with greater precision, and to investigate relationships between different elements in a way that would be physically impossible in the actual building. Given all these advantages, there are plans to undertake a comprehensive program of 3D scanning in a future season.